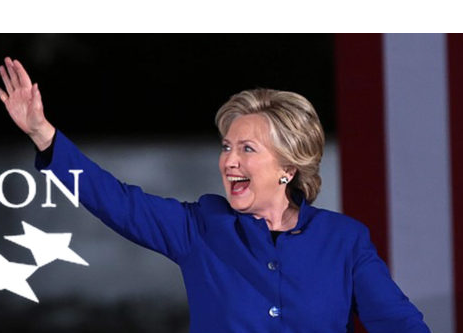 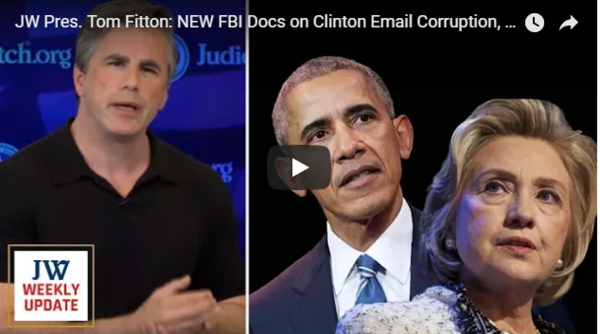 This is just too rich. We now have emails from notorious anti-Trump, pro-Hillary Clinton FBI officials who seem to confirm that James Comey and Loretta Lynch decided to let Hillary Clinton ride on her email abuses before she was even interviewed by the FBI.

The FBI ?originally informed?us it could not locate any records related to the tarmac meeting. However, in a related?FOIA lawsuit, the Justice Department located?emails?in which Justice Department officials communicated with the FBI and?wrote?that they had communicated with the FBI.?As a result, by?letter?dated August 10, 2017, the FBI stated, “Upon further review, we subsequently determined potentially responsive documents may exist. As a result, your [FOIA] request has been reopened …” This is the second batch of documents the FBI produced since telling us they had no tarmac-related records. So this makes two cover-ups!

We obtained the documents in response to our October 2016 Freedom of Information Act (FOIA) lawsuit (Judicial Watch v. U.S. Department of Justice?(No. 1:16-cv-02046)) filed after the Justice Department failed to comply with our July 7, 2016, FOIA request for:

In a previously unseen email, on July 1, 2016, Strzok forwarded to Bill Priestap, assistant director of FBI counterintelligence, and other FBI officials an article in The New York Times titled, “Lynch to Remove Herself From Decision Over Clinton Emails, Official Says.” Priestap comments on it, saying: “The meeting in PX is all over CNN TV news this morning …” Strzok replies: “Timing’s not ideal in that it falsely adds to those seeking the ‘this is all choreographed’ narrative. But I don’t think it’s worth changing … later won’t be better.”  Priestap responds: “Agreed.”

In November 2017, we revealed 29 pages of FBI documents showing officials were concerned about a leak that Bill Clinton delayed his aircraft taking off in order to “maneuver” a meeting with the attorney general. The resulting story in the Observer was discussed in this production of documents. The Strzok email was absent from this production.

Another Strzok email suggest the decision on the Clinton email matter has been under discussion since April 2016—three months before then-FBI Director James Comey announced he would recommend no prosecution.

On July 3, 2016, in an email with the subject line “Must Read Security Article” someone from the FBI’s Security Division (SECD) forwards the article in the Observer and reveals concern:

I believe that the source quoted in the article is one of the local Phoenix LEO’s [law enforcement officers]. Needless to say that I have contacted the Phoenix office and will contact the local’s [sic] who assisted in an attempt to stem any further damage. This is exactly why our Discretion and Judgement are the foundation of the AG’s trust in our team, which is why we can never violate that trust, like the source did in this article.”

In a July 1, 2016, email from an unidentified official in the FBI Security Division sent to officials in several FBI offices with the subject line “Media Reports***Not for Dissemination***”, sent in the wake of the tarmac meeting, an FBI official warns his colleagues “Our job is to protect the boss from harm and embarrassment.” [Emphasis in original] He emphasizes that FBI officials should ask themselves: “What issues are currently being reported in the media? And what actions/interactions/situations that the Director may be in could impact them.” The official then cites an example of a public relations disaster near-miss when Comey’s plane “literally just missed Clinton’s plane” when they flew into the White Plains, NY, airport (HPN) a few months earlier, and saying, “Imagine the optics and the awkward situation we would have put the Director in we would have been at the FBO at the same time as Secretary Clinton.”

In a July 1, 2016, email exchange, FBI Section Chief Rachel Rojas warns a colleague to “stay away” from discussion of the Clinton Lynch tarmac meeting following publication of the meeting, unless they hear from a “higher up”. The colleague responds the next day, telling Rojas not to worry because, “I know better <winking.>” He/she adds that “it was DOJ opa [Office of Public Affairs] who threw us under the bus.” Rojas replies “Doj is likely overwhelmed so in [sic] hoping it wasn’t intentional. I know it wasn’t you guys because I know you have great judgement. Nothing good would come from that. Her staff should have avoided that scenario. The bu[reau] will be fine but obviously disappointed on how this is happening. Unfortunately, she’s taking heat from all over the place and I feel bad for her. I know she didn’t want this on her plate or for this to happen.” The colleague then concludes by saying that he/she thought the leaker was “a Phoenix cop assisting with the motorcade.”

These emails are simply astonishing. No wonder the FBI hid them from the court and us. They show anti-Trump, pro-Clinton FBI Agent Peter Strzok admitting the decision not to prosecute the Clinton email issue was made back in April 2016 – long before Hillary Clinton was interviewed. And the new emails show that the FBI security had the political objective of protecting then-Director Comey from ‘embarrassment’—which is, frankly, disturbing.

Here’s additional background: On June 27, 2016, Attorney General Loretta Lynch?met?with former President Bill Clinton on board a parked plane at Sky Harbor International Airport in Phoenix, Arizona. The meeting occurred during the then-ongoing investigation of Mrs. Clinton’s email server, and only a few days before she was interviewed the Justice Department and FBI. (We filed?a request?on June 30 that the U.S. Department of Justice Office of the Inspector General investigate that meeting).

The tarmac meeting also came just days before former FBI Director James Comey held the July 5, 2016, press conference in which he announced that no charges would be filed against Mrs. Clinton. In his subsequent May 3, 2017, testimony before the Senate Judiciary Committee, Comey said the Lynch-Clinton tarmac meeting was the “capper” among “a number of things” that had caused him to determine that Department of Justice leadership “could not credibly complete the investigation and decline prosecution without grievous damage to the American people’s confidence in the justice system.”

These latest documents are more evidence that the arrogant FBI assumed its secrets would never see the light of day. Judicial Watch proved them wrong.