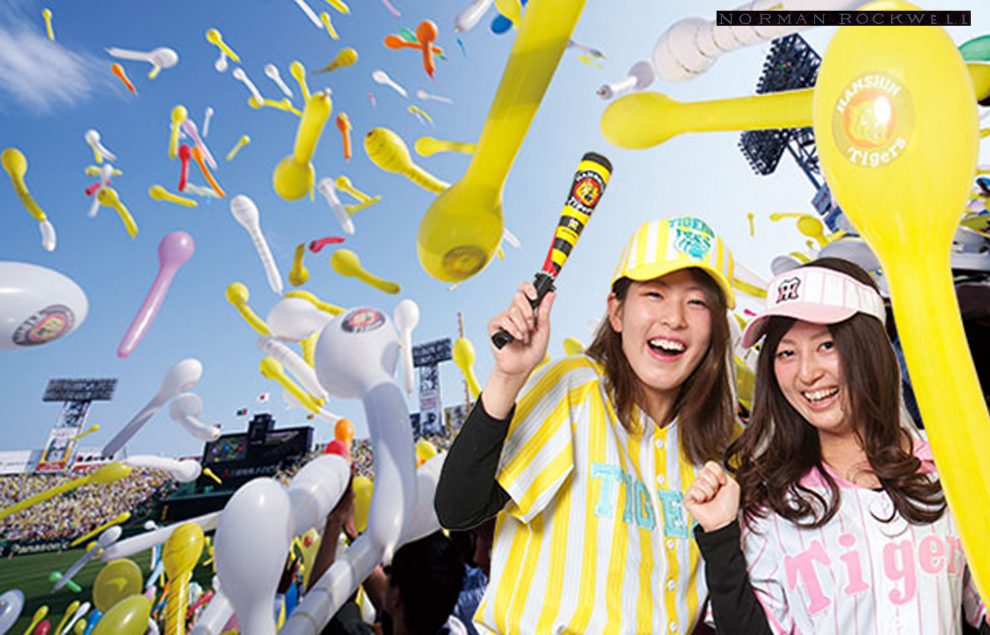 It’s a Friday night in Osaka, Japan. Like they have for almost a century, people exit the Koshien rail station by the thousands and walk a short distance away to the Hanshin Koshien Stadium. Since 1924 the ivy covered exterior walls of this venue have seen plenty. Babe Ruth and his American All-Star Team visited here as part of their barnstorming tour of Japan in 1934. Japan’s best high school baseball talent has played here since its opening in tournaments that rival basketball’s Final Four in popularity here in America. Most of all it has been the home ground of the beloved Hanshin Tigers, whom along with the Yomiuri Giants are considered to be the two most popular baseball teams in Japan.

Tonight the Giants would be the Tigers’ opponent, as not only are these two the most popular clubs in Japan but also the biggest rivals in the Land of Rising Sun. A meeting of the two clubs is traditionally dubbed “The Classic Series”.

A TALE OF TWO TEAMS

Baseball was brought to Japan back in 1872 by an American named Horace Wilson. The game grew quickly in popularity at the amateur level but it wasn’t until 1936 that a stable professional baseball league was founded as the Japanese Baseball League. The wildly popular American baseball tour of 1934 was a major factor in its founding and the Tokyo Kyojin(now Yomiuri Giants) and the Osaka Tigers(now Hanshin Tigers)  were the driving forces behind its establishment. The league reorganized into its current two league format (Central and Pacific) as the Nippon Baseball League in 1950.

The Giants and Tigers are members of the Central League. And while they bask in the light of being Japan’s most popular clubs, on the field their histories couldn’t be more different. The Giants are Japan’s dominant baseball club with thirty six Central League titles and twenty two Japan Series championships on their resume.  They play in the iconic Tokyo Dome and the list of great players is endless with Sadahuru Oh leading the way. Oh spent his entire career as a Giant and blasted an untouchable 868 home runs for Yomiuri.  .

Then there are the Tigers, the loveable losers of Japanese baseball. Since the NPB’s founding in 1950 they’ve won just five league titles (currently each league has six clubs each) and count only the year 1985 as when they won an NPB title, the least of any team in Japanese pro baseball. Even that one championship is laced with controversy as the actions of celebrating Tiger fans led to what is known as “The Curse of the Colonel” when fans dumped a statue KFC’s Colonel Sanders into the Dotonbori Canal following their series win. Of course, they have yet to win another.

AN EVENING OF BASEBALL IN JAPAN

Koshien Stadium is a throwback. It features a natural grass field in a country where most clubs use turf. Its infield is completely made up of dirt. There’s no grass unless it’s in foul ground or in the outfield, again completely different from most Japanese venues as the only dirt on a NPB infield tends to be on the mound and in the areas near the bases. With seating for over forty seven thousand it is amongst the largest in Japan, and having drawn over three million fans (144 game full season schedule) it is usually very full.

Evening games in Japan start at 6pm and usually tend to start right at that time, not 6:05 or 6:10. And when the ceremonial first pitch is thrown there’s a batter from the visiting team in the box to take a ceremonial swing and miss at it. No, that doesn’t count as a strike on the first batter of the game.

Traditionally in Japan the fans of the home team sit on the first base side, and the visiting fans however many there are sit on the third base side. The stadium is filled from the game’s start to finish and beyond with noise. Each batter that comes to the plate has a specific chant or song that the fans participate in nonstop throughout his at bat. Next batter comes up, a different personalized chant or song, and so on. Fans also add to the noise by bringing their own noisemakers. It creates for a lively and festive atmosphere unmatched by anything seen on the North American continent.

Leading the cheers are the “oendan” and each team has their own. They each take up several sections of seating beyond the outfield fences with the visitors crew in the left field seats and the home oendan in right. Along with the chanting and singing, the oendans possess megaphones to lead the cheering with and are accompanied by several bugle players, drummers, and fans waving massive flags in team colors. Traditionally when the visiting team is batting the visiting team’s oendan is on their feet chanting, singing, making noise while the home team’s oendan remains mostly quiet. Conversely in the home half it becomes the oendan of the home club’s turn to raise hell from the outfield bleachers while the visiting oendan remains quiet.

A night in Japanese baseball, especially with its two top rivals at Koshien would make for an incredible atmosphere.

A classic pitchers duel was developing on this night. Giants ace starting pitcher Tomoyuki Sugano had been perfect in retiring the first twelve batters through four innings, and Yuta Iwasada had likewise kept the Giants at bay and off of the scoreboard for the Tigers. 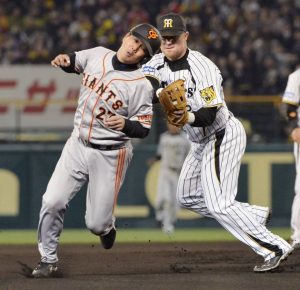 Sugana made it thirteen batters in a row when he retired the first batter for the Tigers to open the fifth inning. Then up came star player Yoshio Itoi, member of Japan’s 2013 World Baseball Classic team. Itoi launched a bomb into the heart of the Tigers oendan in right field that sent them and the rest of Koshien into an absolute frenzy. Itoi rounded the bases and upon reaching the dugout received a bouquet of flowers in accordance with tradition.  Tigers 1, Giants 0. Loveable Losers 1, Evil Empire 0.

THE MOST JOVIAL INNING IN BASEBALL

At baseball games here in America, we have the “seventh inning stretch”. It’s a happy affair with the singing of “Take Me Out to the Ballgame” and everyone gets up and stretches out after a lengthy day on their fannies. Japan doesn’t quite do the seventh inning like that, but make no mistake it’s the happiest time of the game. Prior to the top half of the seventh the visiting team’s oendan leads their team’s fans in the singing of their team fight song with its music playing over the stadium public address system. Then comes the middle of the seventh when the home team’s oendan leads their fans in singing their team fight song. To top it all off, fans release thousands of team colored balloons into the air which make noise as they lose air. The grounds crew spends the next few minutes cleaning the field from thousand of spent balloons. 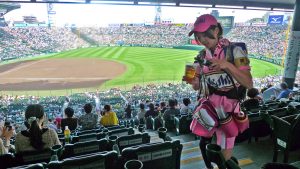 In Japan, most concession workers carrying goods throughout the stadium seating bowl are teenage and young adult women. They serve all kinds of food and drink but the most frequent servers a fan sees serves beer. These ladies dressed in somewhat short skirts walk around the seating bowl carrying a container of beer on their back where ever they go armed with a tap to fill a cup with. Prices were pretty affordable as 750 yen (about 7$) was as pricey as it got at the ballpark. Also, there’s no cutoff! Beer is sold right to the end of the game.

TO THE NINTH INNING!

The Giants came to bat in the top of the ninth inning. Amazingly enough, Ioto’s fifth-inning home run was still holding up as the game’s only run. Three outs to go for the Tigers, and apprehension continued to build amongst the noisy faithful at Koshien. The Tigers had shut down the Giants for eight innings, would just one more be in the cards tonight? Or would Japan’s greatest baseball club break the hearts of Tiger fans once more?

If you’ve ever been a fan of a team that is traditionally inferior to the opponent, you learn to fear the worst. It wouldn’t be easy for the Tigers. The Giants would get two base hits in the ninth to put runners on the corners with two outs. But Tigers reliever Rafael Dolis was able to strike out Yoshiuki Kamei for the game’s final out and get the save. With that, Koshien erupted and again sent thousands of noisy balloons skyward in celebration.

The game might be over but the event that is Japanese baseball doesn’t end with the game’s final out especially when the home club is victorious. Immediately after the game the entire Tigers team went out to the first base line on the infield, faced the adoring fans and gave a wave and bow in unison. Meanwhile a crew is racing to set up a post game studio show on the field. The star perfomers of the game (Itoi, the home run hitter and the pitchers that tossed the shutout) are brought back onto the field to face softball questions from a host for a few minutes about that nights’ game. The fans, most of which are still at the game drink this all in with much joy, especially in the oendan where absolutely no one has left their seat.

Eventually the show moves out to the oendan where players, cheerleaders (yes there are cheerleaders in Japanese baseball) and mascots all head out to right field to salute the  most passionate part of the team’s fan base. It caps off an amazing night at an amazing park in Japan’s most ferocious and longest standing rivalry. Glory and titles be damned. On this night the loveable losers were victorious.

And with that the chanting and singing finally subsided and the rest of the fans still at the park wandered back to Koshien Rail Station to make their way home for the night. It’s a scene that’s been repeated for over eighty years here at Koshien as the most dedicated baseball fans in Japan continue to support their club. It’s a sight to see and one of many ways a game night in Japan is unparalleled in fan enthusiasm to anything we have in America.

There are currently twelve teams in Nippon Pro Baseball. The season runs for 144 games and features some interleague play. At season’s end the top three teams in each league qualify for the postseason. The second and third seeds meet in a best of three series, with the winner taking on the regular season champion in a best of five series. The two league playoff winners meet in a best of seven Japan series for the right to be the champions of Japan.

Last year the Fukuoka SoftBank Hawks(Pacific Champs) defeated the Yokohama DeNA Baystars(Central Champs) to win the 2017 Japan Series. The Hawks have won the Japan Series in three of the last four years.

Teams tend to be named after their ownership, as they are generally owned by major Japanese entities. For example, Hanshin Electric Railway owns the Hanshin Tigers. The Yomiuri Giants are owned by the The Yomiuri Group, a massive Japanese media conglomerate. The teams may or may not have the name of the city or region they are located in as part of their name.

Games in Japan can end in ties! Really! If a game is still tied after twelve innings the game is ended and declared a tie and goes into the standings as a tie. In the postseason the rule is fifteen innings before declaring a tie.