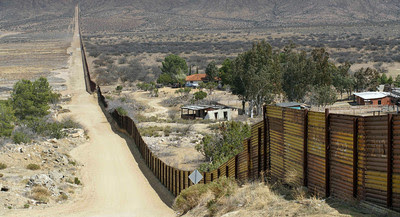 The shooting of a U.S. Border Patrol agent this week occurred in the same southern Arizona region where Judicial Watch recently met with residents and ranchers terrorized by drug and human smugglers gushing in from Mexico. The federal agent was shot multiple times at around 4:30 a.m. while investigating sensor activity on foot in a remote part of Arivaca, according to a Border Patrol announcement. The agent, a 21-year veteran, was attacked by an “unknown number of assailants, one of whom fired several shots at the agent in close proximity,” the agency states, adding that the officer was struck several times.

The ambush occurred on a remote portion of a cattle ranch situated near the Mexican border that is often used as a passageway by immigrant and drug smugglers. The owner of the 50,000-acre property, Jim Chilton, told a local newspaper that he has seen increased traffic in the area during the last couple of months and that the nearby mountains have cartel scouts guiding drug packers and smugglers making their way into the U.S. Chilton told a national newswire that the Border Patrol sent him an electronic mail saying the veteran federal agent was alone on his ranch when he was shot in the leg and hand. Several bullets also struck the agent’s protective vest, Chilton said.

A fifth-generation Arizona cattle rancher, Chilton has testified before Congress on the national security vulnerabilities of a poorly guarded southern border. Portions near his property are simply marked with strands of barb wire that are easily penetrated by smugglers. “National Security demands that drug traffickers, terrorists and undocumented aliens be prevented from entering the United States at the border,” Chilton said during testimony before a House hearing several years ago. “Currently, on our ranch these people often travel 10 to 20 miles inside our country before the Border Patrol attempts to apprehend them…Our losses have been great and our sense of security in our own country has been severely damaged. We live with weapons near our bed, at the doors, in our vehicles and attached to our saddles.”

Chilton’s property is only a few dozen miles away from Sierra Vista, a Cochise County border town with equally frustrated ranchers. As part of an ongoing investigation into the critical security issues created by the famously porous southern border, Judicial Watch recently spent time in Sierra Vista, which is located 75 miles southeast of Tucson with a population of around 44,000. One of the ranchers (John Ladd) Judicial Watch visited said more than half a million illegal immigrants of several dozen nationalities have been apprehended on his sprawling cattle ranch. Ladd has also found 14 dead bodies on his 16,500-acre farm, which has been in his family for well over a century and sits between the Mexican border and historic State Route 92. The property shares a 10 ½-mile border with Mexico, making it a popular route for human and drug smugglers evading a meager force of Border Patrol agents in the mountainous region. “I can’t guarantee there’s not a dead body somewhere in my ranch right now,” Ladd told Judicial Watch.

Other ranchers and longtime residents said that illegal immigrants and drug smugglers are devastating the area and many of them live in fear. Some are too scared to enjoy a simple pastime—horseback riding on their own land. Some portions of the border adjacent to Ladd’s property have an 18-foot iron fence, but others have a laughable wire fence that has been repeatedly penetrated by vehicles speeding through from Mexico. The fence is such a joke that the Border Patrol installed concrete barriers along a busy two-mile stretch in front of the barb wire barrier on Ladd’s property line to stop smugglers. Judicial Watch also visited another nearby smuggling route that’s inexplicably unprotected. The dirt road runs through the Coronado National Forest and five strands of barb wire serve as the physical boundary between the U.S. and Mexico in a remote portion of the park, which is closed to the public at night and is heavily transited by drug and human smugglers. Illegal immigration has had such a devastating impact on the area that one longtime resident wrote a book offering detailed anecdotes of what he and his family endure because they live near the Mexican border. This includes drugs and illegal immigrants piling into vehicles on the road adjacent to his four-acre property and ultralight aircraft flying near his rooftop, just above the trees, en route to make a drug drop.