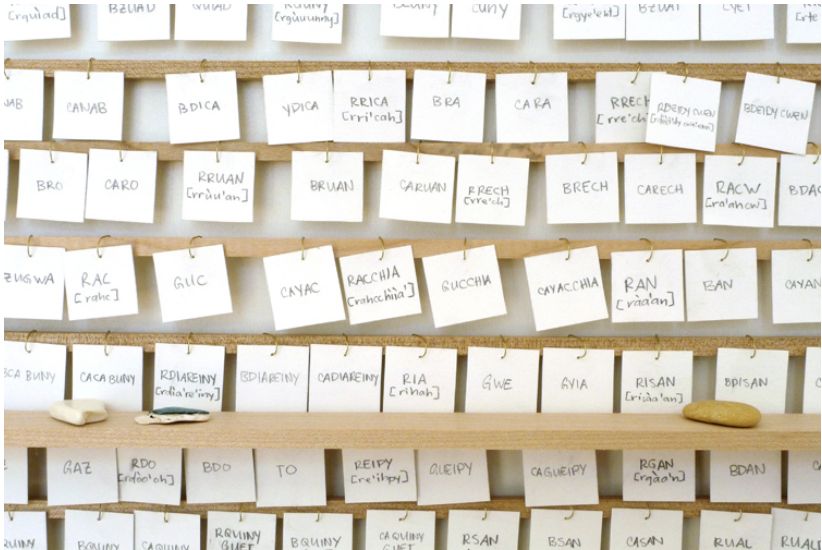 Works by Carolina Caycedo and Clarissa Tossin explore globalization and capitalism from a South American perspective, while Kang Seung Lee reinterprets popular protest photographs to examine how human bodies are represented in moments of social unrest. Focused on language as a signifier of culture, Gala Porras-Kim’s interest in linguistics stems from her childhood spent learning her mother tongue–Korean–while growing up in Colombia speaking Spanish. Rooted in his experiences living in a queer, Black body, EJ Hill affirms “Every body is godly” in the work Every body (2018). Similarly, Jen Smith’s WE MAKE THE RULES (2010) is a textile-based work conceived both as a communal affirmation as well as a critical provocation of imperial power. In Box (a proposition for ten years) (2012-2022),Patricia Fernández reveals the inaccuracy of inherited memories and the subjectivity of personal experience. Elsewhere in the gallery, works by Alice Könitz, Jennifer Moon, Beatriz Cortez and Rafa Esparza showcase the unmatched diversity in Commonwealth & Council’s programming.

The exhibition at Tina Kim Gallery coincides with a second New York presentation entitledCommonwealth & Council, opening on July 1, 2018 at 47 Canal in the Lower East Side. For both shows, each gallery brings its own distinct history – Commonwealth & Council has gained recognition for nurturing its community of LA based artists, 47 Canal for its strong program of east- coast artists and Tina Kim Gallery for its multi-generational roster of Korean artists. While the three spaces are unique, each was founded by Korean-Americans in an effort to address globalization and the need for more diversity in the art world.

Commonwealth & Council is located in Koreatown, Los Angeles; it was founded in 2010. The gallery celebrates its manifold identities and experiences through the shared dialogue of art—championing practices by women, queer, POC and ally artists to build counter-histories that reflect individual and collective realities. It was founded by Young Chung, an artist and independent curator.

47 Canal is a cutting-edge contemporary art gallery located in New York’s Chinatown neighborhood. It was founded by artist Margaret Lee and her husband, Oliver Newton, in 2011. The gallery operates two locations in the Lower East Side: one at 47 Canal, and a second at 291 Grand. Artists represented by the gallery include Anicka Yi, Josh Kline, Michele Abeles, Antoine Catala and Alisa Baremboym.

Located in New York, Tina Kim Gallery is celebrated for its unique programming that emphasizes international contemporary artists, historical overviews, and independently curated shows. Founded in 2001 by second-generation gallerist Tina Kim, it is noted for working closely with museums and institutions to expand the audience of its global roster of artists with a special emphasis on showcasing historically important but lesser known Korean artists.