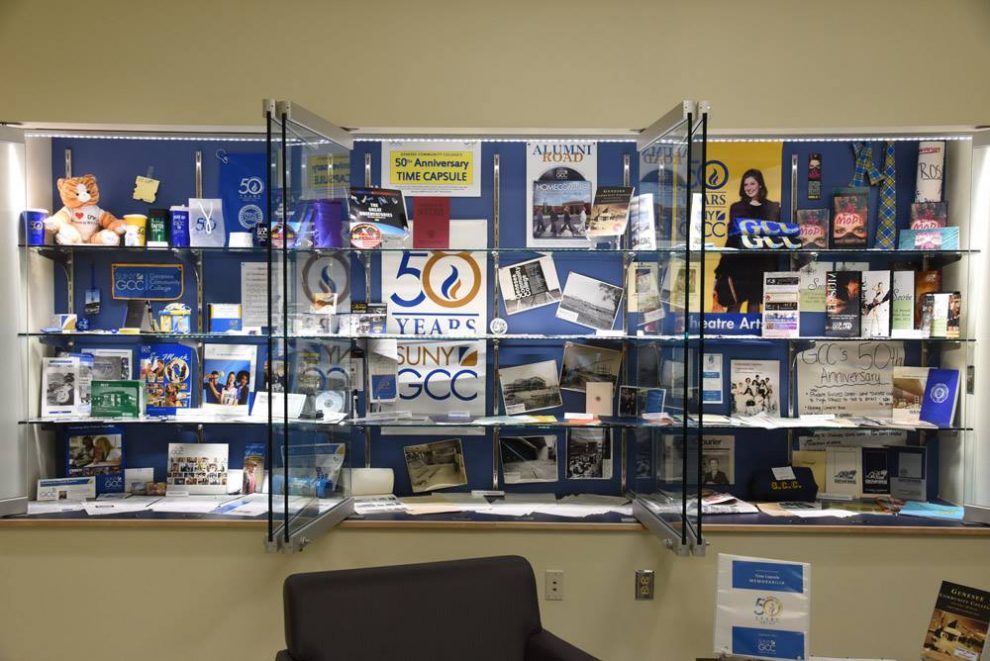 BATAVIA, NY (06/19/2018) Last month, Genesee Community College officials marked the end of a multi-year 50th Anniversary celebration by sealing a special Time Capsule inside the stairwell at the south end of the new Richard C. Call Arena. The treasure trunk is filled to the brim with over 200 items of College memorabilia collected over the past 18 months to document, preserve and celebrate the College’s first 50 years. The Time Capsule is scheduled to be opened in May of 2068 as part of GCC’s 100th Anniversary Celebration.

“Sealing up and stowing away our Time Capsule offers the perfect opportunity to draw our eighteen month 50th Anniversary celebration to a close,” Dr. James M. Sunser, president of GCC said. “It tied together our inspirational past and our dynamic present, and all within a new facility offering immense promise for GCC’s future. If there is a better conclusion to the whirlwind of anniversary celebrations and activities this past year, I can’t think of it.”

Within the collection are the following ten categories of items with several sample items highlighted:

A few historical highlights: GCC is one of the few colleges nationwide that was established as a result of a successful grassroots campaign that culminated in a successful 1966 public referendum supporting the creation of a community college. Genesee Community College first opened its doors on September 28, 1967 with 21 faculty members and 378 full-time and 243 part-time students-which was five times more than anticipated. In addition, alumnus Donald Conway, GCC Class of 1979, who worked on a major NASA project during his employment at Kodak, shared some of the collateral materials from the CHANDRA X-Ray telescope. Conway attended the Time Capsule ceremony and helped President Sunser stow the large trunk-size capsule.

A photograph of GCC’s Time Capsule while it was on display in the trophy case of the Richard C. Call Arena is available at: http://marketing.genesee.edu/images/GCC_TimeCapsuleDisplay.jpg

A photograph of Donald Conway ’79 and President Jim Sunser posing before the Time Capsule before it is stowed away inside the wall at the Call Arena is available at:

To view the Facebook album of Time Capsule event photos go to: