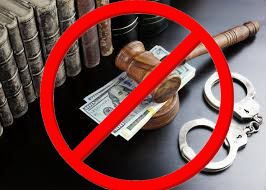 “Thousands of New Yorkers are languishing in jail awaiting trial because of a cash bail system that punishes people for being poor. Tonight, those people will be sleeping in cages, and Harvey Weinstein will be sleeping in his own bed. That’s not justice.”

Continues call for investing in #SchoolsNotJails in New York

NEW YORK, NY — With just days left in the legislative session and the prospects of meaningful criminal justice reform once again slipping away, Democratic candidate for governor Cynthia Nixon issued a bold call for an end to cash bail and discriminatory policing that targets communities of color, declaring that we should be investing in schools, not jails, in New York.

You can view the video here.

In a two-minute video, released through social media, Cynthia offers a stark assessment of the state of criminal justice in this state and across this country. Like so many New Yorkers, Cynthia is sick of the empty promises and weak half-measures on criminal justice reform we get from Andrew Cuomo year after year. While the Governor promised in his budget address in January to sign legislation that would ensure a speedy trial, and modernize New York’s criminal discovery statute, he has done nothing to make meaningful criminal justice reform a reality.

Cynthia will be attending the Juneteenth rally at 5:30PM today in Foley Square to listen to the stories of those who have been affected by mass incarceration and to join them in protest for criminal justice reform. She will be available for questions.

The full transcript of the video is below:

So two people are arrested in New York.

One of them is Harvey Weinstein who is a wealthy white man accused of decades of sexual assault and rape. He walks free, because he can afford to pay his one-million-dollar bail.

The other Kalief Browder who is a black, 16-year-old kid accused of stealing a backpack. His family can’t afford to pay his $3,000 bail. So he spends the next three years on Rikers Island, where he is beaten and placed in solitary confinement. All without ever being found guilty of a crime.

Because in New York State, we have one legal system for the poor and people of color, and another for wealthy white people who can effectively buy their freedom.

And it’s just one piece of a broken system that criminalizes communities of color starting from birth.

It begins in the schools, where normal youthful behavior gets black and brown children handed over to law enforcement. They’re put in front of police officers, prosecutors, and judges, when their white peers are being referred to guidance counselors and psychiatrists.

In continues in their communities, where children of color are targeted by hyper-aggressive policing and arrested for petty, minor crimes – offenses that somebody who looks like me would never be arrested for.

It has to stop. We have spent billions of dollars locking up people of color. It is tearing families apart. It is destroying communities. And it hasn’t made us any safer.

It is time to abolish cash bail, and guarantee speedy trial.

It is time to end discriminatory policing that targets communities of color.

And it’s time to invest in schools, not jails, here in New York state.