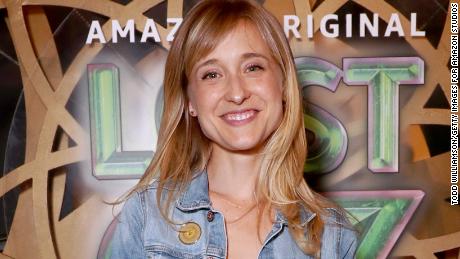 Keep in mind we do not have Allison Mack’s side of the story.

This came from a neighbor:  Allison Mack befriended an 8-year-old girl in Knox Woods where she lived near her cult leader Keith Raniere. The girl was a budding gymnast and Mack spent time with her encouraging her – quite possibly telling the child she knew of a wonderful man who could help fulfill her youthful dreams of becoming an Olympian.

The neighbor witnessed this – and interacted with Mack several times. He saw firsthand what he spoke of, he said.  He felt the relationship was inappropriate. He went so far as to say that once – and only once – he personally saw Allison fondle the girl on or about her chest.

I asked him if it might be innocent – just a playful push or an accidental slip of her hands amid hugs, after the girl would show off her skill as a gymnast.

He said no. He believed it was inappropriate to touch the girl and rub her chest that way.  This was before the exposure of Raniere and Mack in the mainstream media. He did not report it to authorities – although perhaps in retrospect he should have.

Allison – neighbors said –  seemed to only rarely walk with Raniere – who was often spotted walking with many different women at all hours of the day – often holding hands.  Most times Allison walked alone, however. Perhaps she was busy texting other women – encouraging – or ordering them into Raniere’s boudoir – or looking for fresh conquests for Raniere – of any age.  Perhaps one day, she intended to bring the little girl over to 8 Hale for Raniere to teach her gymnastics. Quite possibly not.

Keith Raniere seems to have acquired – or rather it just magically appeared – via Bronfman money – his town home on 8 Hale Dr. around 2006-07.  While he lived menage a trois with Pam Cafrtiz [until her death] and Mariana Fernandez on nearby Flintlock Lane and later Oregon Trial – he had his own personal space at 8 Hale Dr. This was his bachelor pad.

Inside it, was his $40,000 grand piano [magically appearing with Bronfman money] and his library was placed inside there also to give it a bookish feel for the man who claimed to be the world’s smartest.

The home was raided by the FBI in late March and many items were removed. It lies empty now.  The piano remains downstairs as does his hot tub – upstairs – I am told. An ex-NXIVM member reminded me that 8 Hale was not merely a sex lair- as it has been described by critics. It was a multi-faceted place, she said, where Raniere met people for other-than-sexual purposes. He taught at least one male actor piano lessons there. He would read or simply enjoy the good company of students, I was told. He would coach, teach singing, play piano for adoring slaves and mentor there.

And he used it as a sex lair.  At least one DOS slave told me she was allowed to stay overnight at 8 Hale – after he had sex with her. Her coming down in the morning and going over and seeing Allison – with hair mussed up – led Allison to realize she had stayed at 8 Hale overnight and this got Allison jealous, according to the DOS slave – now escaped.

It may be true that Allison had no ill intentions for the 8-year-old girl – mentioned above – and maybe others of like age. But Allison [like Pam] knowingly associated with – chose to dedicate herself to – a man accused of pedophilia. Now Allison stands accused of sex trafficking. She is on home arrest and a $5 million bond, 2,500 miles away from Raniere -in a prison cell. If she is convicted she will spend years – perhaps life – in prison.

We do not have Allison’s statement on the little girl. We do know that the woman she replaced as chief pimp for Raniere – the late Pamela Ann Cafritz –  hired a 12-year-old girl to walk her dog for her – to get the child close to Raniere – who taught her how to hug like an adult – pelvis to pelvis. There were lots of hugs in those days – and kisses on the lips.  It worked then. Raniere raped the 12-year-old about 60 times, the girl- now a woman claimed in written documents at the time.  Police chose not to press charges – unless the girl agreed to wear a wire and confront Raniere alone. She declined. He was not prosecuted.

If she was trying to groom her – was it because she was trying to please her Vanguard? – or satisfy her own perversions?  It doesn’t matter perhaps. She hitched her wagon to the dark star of Raniere – a monster of perversion – and either way she pays the price – like many others will do shortly.