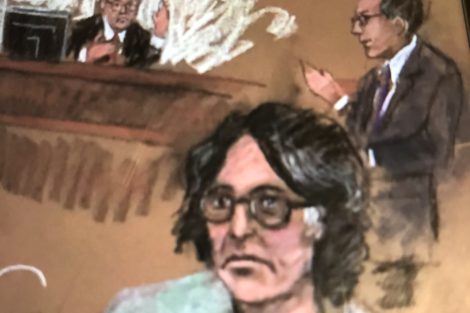 The US Bureau of Prisons operates the Metropolitan Detention Center (MDC) in Brooklyn, New York. MDC is officially categorized by the feds as an Administrative/Transfer Detention Center.

MDC does not offer inmates natural light, air and outdoor recreation spaces. MDC offers an abundance of mold; blood-borne diseases; asbestos; and particulate matter.  The absence of fresh, clean air, the absence of sunlight, and the absence of outdoor time and activities are part of the MDC experience.

During the three months he has been incarcerated at MDC, he has not been permitted to go outside of the building for outdoor recreation. He has not breathed in anything but the recycled air containing spore dust and bacteria that has continuously been circulated throughout the building.

The Food Services areas are infested with rodent droppings, germs and bacteria.  There is no effort to control pests including: rats, mice, cock-roaches, and flies.  There are rat droppings in the kitchen area. Food at MDC is sometimes spoiled and moldy.  The food is cooked in the West Building and delivered to the units where it is re-heated and served to male and female units.

In the dorm-like open area where the female prisoners reside, ninety plus inmates share six showers; 3 urinal stalls and 3 shit stalls, 2 dryers and 2 washing machines. In the cell areas where Raniere resides, each pair of “cellies” shares an open toilet and sink — and a set of cast-iron bunk beds.

The washers and dryers are running almost 24 hours a day.  There is no circulation of air; one fan is provided for each unit.  The dryers vent directly into the sleeping, eating, and living space.  This introduces particulate matter which exacerbates colds, flus, asthma, coughs, and other breathing disease entities.

The supply air has clogged and filthy outlets indicating that the supply air itself is full of airborne matter (dust, organics and particles).  Raniere breathes dirty air that gets recycled without sufficient fresh air. Mold is present on ducts, shower areas, ceilings, and walls.

There are no physical barriers between the sleeping, eating, and restroom areas.  Raniere eats a few feet away from toilets, showers and dryer/washers. The kitchen area is also in the same physical space.  Raniere is very likely made to sleep on a urine stained, worn mattress.

Mold is visible on the showers, floors and walls.  Most showers do not have working drains, so waste water flows onto adjoining showers. The vents where air conditioning and heat come into the unit do not have filters.

At MDC, inmates are stripped searched (every item of clothing comes off) after every visit or trip outside the prison [like when Raniere goes to court].

There is zero independent movement outside his immediate unit and the adjoining “Recreation Deck”.

No one should be subjected to these inhuman conditions – but if there were an exception that proves the rule – it might be Keith Raniere. For he subjected so many to cruel and inhuman punishment himself – winning through joy as he did it also.

Click here to post a comment
Correction: Raniere did not have a $40k piano at 8 Hale Drive — he had a $90k piano
Laura Darby: Nxian members’ homes not listed by Franca DiCrescenzo – Is NXIVM’s longtime realtor out?