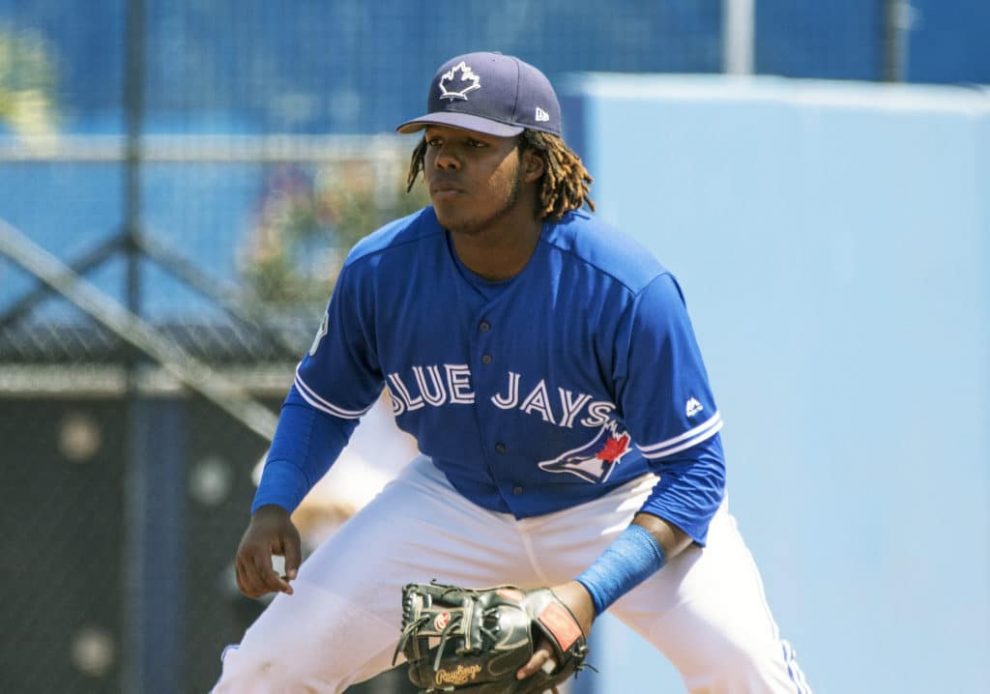 Blue Jays phenom may be in Bisons uniform soon

If there’s one name that gets the Toronto Blue Jays faithful excited and hopeful for the future, it’s third baseman prospect Vladimir Guerrero, Jr.

Yes, that Vladimir Guerrero. Son of the Montreal Expos and Los Angeles Angels hall of famer. A name that still evokes excitement and respect not only in Montreal, where the flicker of a return to Major League Baseball is very much alive, but all across Canada, which has more or less adopted the Blue Jays as Canada’s Team.

The 19 year old prospect has been lighting things up in the minors, especially this season. In 53 games at AA New Hampshire, he has logged a .407 batting average and 11 home runs in only 53 games, while also recording a healthy .667 slugging percentage. Scouts have been amazed at his progress for someone still so young, many saying that he has figured out AA pitching and has nothing left to prove at that level.

This past spring, as the Blue Jays concluded their spring training calendar with their popular two game series at Olympic Stadium in Montreal, Guerrero became an instant legend when he hit a walk off home run in the bottom of the 9th for the Blue Jays against the St. Louis Cardinals. The scene could not have been scripted any better, with many in the stands wearing Expos swag and memories of the older Vlad still resonating in many fans hearts, for a franchise that has been gone for two decades plus.

Guerrero signed with the Blue Jays back in 2015 as an international free agent, and the team has been rewarded for taking a leap of faith on a player who is pretty much banking on his family’s name by posting awesome numbers at every level of play in the Blue Jays organization.

The parent Blue Jays, who have been slogging through a dreary and depressing season in a division where the Yankees and Red Sox are running away with things, have been getting increasing pressure from their fan base to bring Guerrero up to the big leagues now.

Guerrero, however, has been sidelined for this past month with a tendon injury to his left knee. The injury occurred in early June during a Fisher Cats game, and at the time the recovery period had been estimated at four weeks.

It looks like that recovery is right on schedule, as the Blue Jays announced that Guerrero is ready to return to active duty pretty soon, and as early as after the All Star Break. He has been training and working out at the Blue Jays spring training facility in Dunedin, Florida, and doctors are giving him a clean bill of health.

But where would he return to?

That question has been answered, as numerous media sources have reported that Guerrero will be promoted to AAA and assigned to the Buffalo Bisons. The team is currently on the minor league All Star break, and will return to action doe a four game set at Lehigh Valley this Thursday. The Bisons return home to Coca Cola Field next Monday.

For the Bisons, the addition of Guerrero to the team roster could not happen at a more opportune time. The team has fallen into their own slumber after a healthy start, which saw them in the league wild card position and within sniffing distance of the division lead for much of April and May.

In the past couple weeks, the Bisons have fallen into their annual June swoon which has been so reminiscent of the Gary Allenson era during his time as the team’s manager. They find themselves trailing both the Lehigh Valley Iron Pigs and the Screanton Wilkes Barre Railriders two teams that have throttled them both at home and away as Buffalo has posted a 7-13 record in the last twenty games.

“I believe in this squad. We have plenty of talent here. Plenty of desire. The ability to get the job done,” said Manager Bobby Meacham. He has offered words of support and encouragement over and over again in post game press conferences whatever the team’s performance on the field.

He has not been afraid to call out players and send them to the woodshed for discipline when need be. Last month he benched first baseman Rowdy Tellez after Tellez barely legged out a run to first base on a routine ground ball. “Unacceptable”, said Meacham at the time.

Along with Guerrero, the AA team in New Hampshire boasts of another “name” player on their roster. Twenty year old Bo Bichette, son of longtime Colorado Rockies star Dante Bichette, has been playing shortstop this season and is batting at .267 as the team heads into the July break. Bichette is another player that Buffalo fans may be seeing in a Bisons uniform in due time.

A Vladimir Guerrero Jr. in a Bisons uniform will certainly spark fan interest once he arrives to Buffalo. Blue Jays fans from Canada will make the trek to Buffalo to watch their future star in action. For local baseball fans, Guerrero’s presence will also spark considerable interest. Expect a frenzy of Canadian media in the house on Guerrero’s arrival, and more reporters covering the team as the homestand calendar flips to July and August.

Will that translate into more wins? A playoff run? A storybook ending would have Guerrero reigniting the Bisons fortunes, and Buffalo overtaking their rivals from Scranton and Lehigh Valley to win the division on Labor Day.

Dare to dream, but that would be silly… kind of like the kid hitting a walk off home run in the bottom of the 9th in the stadium where his dad used to play. Stuff like that just doesn’t happen.