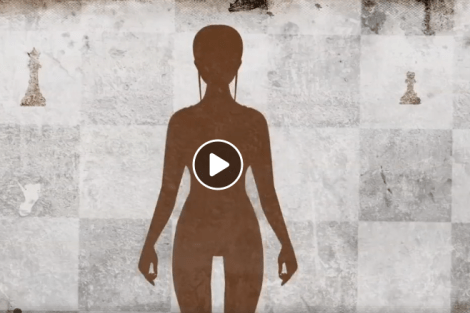 And when Keith Raniere launched his personal growth courses, he already had accumulated a great history of sexual relations with minors, that was established by the FBI, and even though his Mexican followers did not seem to be very worried, they preferred to admire this leader’s charismatic face and celebrate his publicized genius. Gerardo Reyes from Univision Investigate concludes the story.

GR: Raniere made his followers call him Vanguard. It was a name of a game he liked the most when he was young. The week of his birthday was baptized with that name.

In this peaceful place in front of lake George at the north of New York, ESP fans gathered to give tribute for one week to their founder for the occasion of his birthday.

Alejandro Betancourt, Emiliano Salinas and other members of ESP made a show Expressing great devotion for Raniere.

Toni Natalie has a very different image of that spiritual leader

Toni N: “I didn’t want to have a physical relationship with him anymore. He raped me and said it was harder for him than for me. But that it was important that we shared our energies.”

Gerardo Reyes: After the separation as she told us, Raniere started a legal battle against her and accused her of fraudulent bankruptcy and recently of hacking the informatics system of NXIVM, the self-growth organization. None of the cases went anywhere.

Toni N: Terrorism by litigation, that is what he does, he terrorizes people with the Bronfman money, and the power backup with Emiliano´s Salinas money.

The Bronfmans, who Natalie talks about are Sarah and Clair, the heirs of the fortune of the Magnate producer of the Seagram’s, the late Edgar Bronfman. They have both wasted millions of dollars on N XIVM and sponsored the Dalai Lama to visit ESP in 2009.

Gerardo: Raniere was not accused for the rape complaint, Natalie followed his steps and today she assures she collaborates with the USA authorities for the criminal case in New York.

Gerardo asks Toni N: Did the authorities ask you about Emiliano Salinas?

Toni N: I have been asked not to discuss some of the legal things I am working on. But I can assure you that Emiliano Salinas is part of the discussion. This organization has moved from the destruction of USA to the destruction of Mexico.

For some students it was a secret that Raniere invited his students to take “night walks” to seduce them according to two ex-students of ESP, they told us that Raniere wanted to seduce a Mexican who was 19 years old.

Student: I saw her: very young, not stupid, and well if he is very smart and he knew what she needed, he knew how to wrap her

Gerardo R: Univision was able to speak to this young girl but she did not accept a camera interview. She told us that:

“He wanted to talk to me all the time, he sent me messages so I could go and walk with him at night, I saw him as way too old for me”.

Gerardo R: She told us she met Raniere in this ESP study center in Clifton Park in New York to ask him not to insist anymore on the night walks. She also told us that whe preferred to salute him with her hand instead of kissing him in the mouth like most of the students did, men and woman.

Student: You could see that Keith always slept with all of them….

Gerardo R: The Organization also had a chastise regimen, the prosecution alleges that Raniere had locked up in a room a Mexican woman for 18 months because she committed an ethical breach in falling in love with a man who was not him.

Raniere´s lawyer: and the reason she was there was because she stole money and there was a punishment. It was her family and her decision to stay in that room in that house with her family.

Gerardo R: When he was 39 years old, he was in the Guinness Book of Records as one of the three persons that had a superior IQ than the rest of the humanity — which, according to Natalie,  helped him to get fame and wealth.

Anonymous student: They think he is the smartest person in the entire world – and that he’s  smarter than Albert Einstein.

Gerardo R: But the Guinness book has its nuances, Omega Society the institution that certified the IQ exam explained Univision that the test:

– You did not have to take it in a specific place, it was sent by mail.

– There was no limited time to answer

– And that you were not supposed to consult it with other persons.

While he enjoyed his genius fame, Raniere was facing sexual scandals, and they were specifically with minors. According to the accusation in New York, the documents show that he had sexual relationships with a 12 and a 15 year old, He was not arrested. A 1993 request presented by one of the presumed victims and originally published by “Times Union” offered some details.

The woman asked the police not to continue with the investigation

Gerardo Reyes asking Raniere´s Lawyer: Raniere has some background that doesn’t help him for today’s situation

Raniere´s lawyer: I don’t think it happened, that was investigated by authorities and there were no charges, I think that is only left as a rumor.

Gerardo R: But there is a document that one of this girls says “yes, I had sex  with him”

KR Lawyer: yeah hum I mean listen, I don’t know if the woman that was a girl at that moment is telling the truth, the fact that she said “I don’t want to press charges” will not prevent authorities from accusing someone from a crime.

Gerardo R: some of these shadows of Raniere past figure in the Google search, but his followers still did not pay any attention to that. We asked the psychologist Maria Basalt why people with high education level saw Raniere like a god.

Maria: you can be very educated, you can belong to a high class and be very rich, and be very vulnerable and very emotionally labile, I mean education is not enough.

Gerardo R: According to NXIVM lawyer in Mexico, Raniere’s cloudy past did not prevent the organization’s success.

Mexico Lawyer:  the people here gave courses and had very good results, I can tell you 250 courses, 8,000 students….

Gerardo Reyes: The Mexicans chose to see the face of a modest and charming genius, author of courses where they attributed him their personal success like this ballerina confirms in this promotional video:

Ballerina (associate of anima ink):  The truth of the matter was that I cleared a bunch of mental cobwebs and started to enjoy it more than ever and that’s the reason I was dancing at a level I never had before or thought I could reach.

Gerardo R: Meanwhile according to the FBI the slavery and coercion pyramid grew behind the stage.