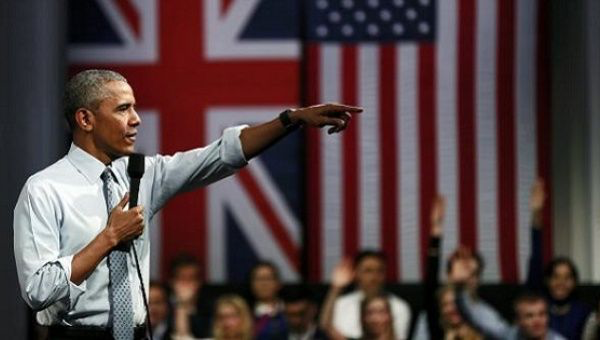 CNN reported yesterday  that President Trump intervened in British politics. “The President delivered an astonishing political knifing of the British Prime Minister on Thursday, comprehensively undermining her fragile position in Britain’s tortuous negotiations on leaving the European Union and getting his visit to the country off to the most explosive of starts.”

The article further provided that

Trump’s comments represent a stunning intervention in British domestic politics, especially since they came at the end of a week in which she lost three ministers, including Johnson, who said her approach is a betrayal of a referendum vote to leave the EU.

They are a fresh sign that Trump has no time for diplomatic niceties, is either oblivious to the political pressures that foreign leaders face or simply does not care about them and is willing to sow disruption wherever he goes in order to enhance his own outspoken political brand.

Fascinating.
But remember when Obama travelled to England for the express purpose of drumming up anti-Brexit support?
Back in April 2016, Obama, in London with then Prime Minister David Cameron said of the then-upcoming referendum that it was
“a matter of deep interest to the United States because it affects our prospects as well. The United States wants a strong United Kingdom as a partner. And the United Kingdom is at its best when it’s helping to lead a strong Europe.”
On April 23, 2016, Obama attended a Youth Town Hall event in London
(After the Brexit vote, Obama backtracked his “back of the queue” statements of the U.K., while his fair-weather BFF David Cameron stepped down, in defeat.)
Obama had a great deal to say to the London children at the event in advance of the Brexit vote. Some highlights include:

And we see new calls for isolationism or xenophobia.  We see those who would call for rolling back the rights of people; people hunkering down in their own point of view and unwilling to engage in a democratic debate.  And those impulses I think we can understand.  They are reactions to changing times and uncertainty.

Obama pressed on with the message:

So my primary message today is going to be to reject pessimism and cynicism; know that progress is possible, that our problems can be solved.  Progress requires the harder path of breaking down barriers, and building bridges, and standing up for the values of tolerance and diversity that our nations have worked and sacrificed to secure and defend.  Progress is not inevitable, and it requires struggle and perseverance and discipline and faith.  But that’s the story of how we won voting rights, and women’s rights, and workers’ rights, and civil rights, and immigration rights, and gay rights.  Because those who came before us often risked their lives to give us the chance to know something better.

Unlike Trump, who has a more direct manner of speaking, there are many platitudes, and coded terminology in Obama’s droning monologue to unpack. Words like “pessimism” and “cynicism” in this context stood for potential pro-Brexit votes; “progress” was defined in this context as a pro-EU-remain vote. Progress more generally was defined as inviting mass immigration.

Obama addressed how a pro-EU, borderless state in the U.K., without much real vetting of Muslim extremists, somehow enhanced the U.K.’s national security:

My first priority is to keep the American people safe.  Just like I’m sure Prime Minister Cameron, if you asked him, what is your first priority, it’s keeping the United Kingdom safe.  So security is always going to be a top-of-the-list item.

And the threats from ISIL and transnational terrorism are absolutely critical to address.  But how we address them is important.

and, continuing on as the president of the world, part of his solution to Islamic terror was—

— very many thoughtful young people I think instinctually are suspicious of military action because too often it’s been used as a knee-jerk response to problems as opposed to part of a broader set of solutions.  But we have to do both, and we can do both.

In terms of the United States right now, I would love to see a focus on early childhood education as the next step in filling out our social safety net.  We don’t yet have institutions that are fully adapted to the fact that, guess what, women work and support families, and they need things like paid family leave and high-quality child care.  And we know that when we invest in children between the ages of zero and three that the outcomes in terms of them getting effective educations and having thriving lives are enormous.  We end up saving huge amounts of money from reduced crime and poverty if we just make that early investment. That’s something that some countries do better than others, and we can learn from other countries along those lines.

Across the board, across the developing world right now, I think we have to attend to issues of inequality.  And one of the places to start addressing these issues of inequality is making sure that every child is getting a decent education.  And a lot of our countries are not doing as well as they should on that front.

Indeed, CNN’s coverage of Obama and his visit was not particularly critical. In an online article entitled “Obama to U.K.: Don’t leave the E.U.”, Obama, “[w]ith flattery, poetry, and a blatant threat,” “urged British voters to remain in the European Union — a controversial intervention into the referendum debate rocking America’s closest ally.” Suggesting  a bit of controversy is about as close to criticism as Obama would receive.

Responding to criticism from then London mayor, Boris Johnson, Obama replied “I am not coming here to fix any votes, I am not casting a vote myself, I am offering an opinion[,]” and “[i]n democracies, everybody should want more information, not less.”

Of course, the same can be said of Trump’s more recent remarks: he offered an opinion, and critically, Trump, unlike Obama in 2016, is not hosting any Town Halls in advance of a vote.

Click here to post a comment
IS PETER STRZOK AGENT 007, OR SOON TO BE INMATE 007?
Nicki Clyne may be placed on hot seat – after being on receiving end of hot iron branding