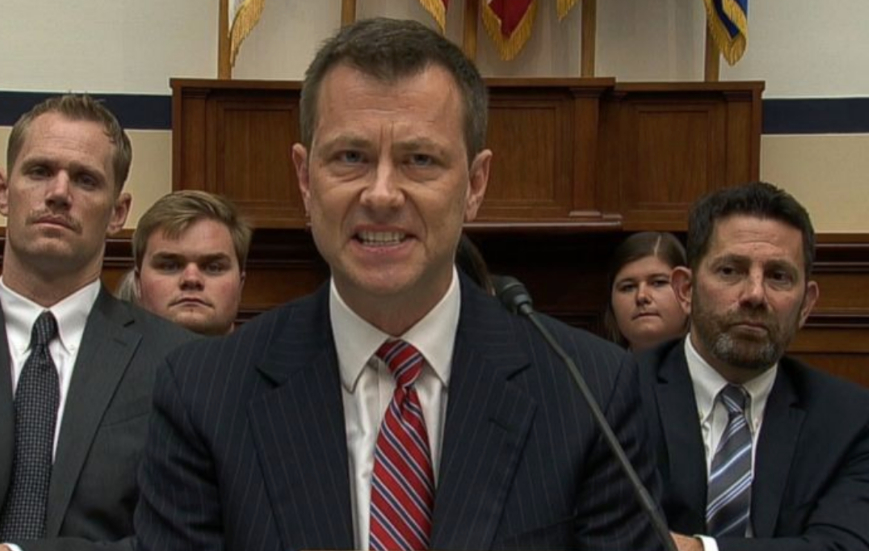 As yet, we don’t know what Lisa Page was asked nor what she said, so anything regarding her line of questions and degree of truthfulness is obviously speculation.

So, we will stick to what “I” do know: both Lisa Page AND Peter Strzok violated FBI Rules and Regulations, FBI Protocol, DOJ Rules and Regulations regarding criminal investigations. Strzok obstructed the Hillary Clinton investigation, committed several criminal acts and by his actions, violated several sections of Title 18, as well as rules and regulations. Strzok obstructed justice by creating/fabricating evidence that he utilized as a precursor to open a Russian collusion Counter intelligence investigation on Carter Page and others, illegally obtained a FISA court wiretap order on Page (a U.S. Citizen), misled, deceived and otherwise violated FISA Court DOJ Rules and Regulations and Federal Laws pertaining to FISA Court wiretaps on citizens, the unmasking of citizens’ names obtained during FISA Court eavesdropping, and committed other crimes in direct contradiction of his oath of office. I emphasize “what I know” because I worked criminal cases, a few very high profile, for my entire 28 plus year FBI career, and, I know the law, the FBI and DOJ Rules and Regs. Strzok violated them all, not to mention failing to use his common sense!

I sympathize with the Republicans in Congress who are trying to get to the truth, but have to deal with an obstructionist, left-wing, Democrat caucus, a new FBI Director who just doesn’t understand what went on, a DOJ lead by a First Deputy, who has a sole purpose of preventing the truth from coming out because he’s involved in the conspiracy, and an AG who won’t get involved in being an AG!

AGAIN, I say, the only person in the world who can help Congress and the American people learn the truth is President Trump!

In a published column in Artvoice on 6-23-18, I suggested a series of questions for the Judicial Committee to consider asking Strzok. These questions were oriented to determine who made the decisions on the Clinton case, primarily, and who opened and ran  the Russian collusion case.

I don’t believe Strzok would have been allowed by Director Comey to make all the decisions that Strzok made without Comey’s full knowledge and consent.

Here’s some of what I am talking about:

In the FBI, each case has a Title, with the Subject’s name(s) in the title or “UNSUB,” which means Unknown Subject. I have NEVER seen or heard of a case that lacked a Subject or UNSUB! Hillary Clinton knows that and must have gotten to Lynch regarding the “subject” of the FBI investigation on her. Clinton said numerous times that she was not the subject of an FBI investigation and I wondered how she could be so sure. I reasoned that she must have gotten to Lynch, not Comey. Comey sort of confirmed my reasoning when he said he was “set back” when Lynch said “matter” and just do it! Lynch tried very hard to make Hillary happy by telling Comey to call the Hillary criminal case a “matter.” Lynch must have told Comey, along those same lines, not to name Hillary as the “subject”, a seemingly unimportant thing to you, but something that to an FBI Agent is vitally important. How could Hillary Clinton NOT be the subject of her email case? To be the subject of an FBI Criminal investigation is NOT a good thing. Remember, she also said “the FBI investigation is a security matter and NOT a criminal investigation ”? I picked up on that as well. All these little words mean a lot when you are trying to figure out who told who what!

The business of the Hillary interview is very telling. Criminal FBI agents NEVER interview subjects in front of their attorney, NEVER- that was and probably still is FBI Rules and Regs, NEVER. Because nothing good can come from it! Hillary wasn’t the Subject? Bullshit she wasn’t, Mr Strzok!!! He also allowed Cheryl Mills, another subject and attorney as well as 4 other lawyers in the interview room!!! When Hillary lied and said she was never provided training on the handling of classified material, why didn’t Strzok show her the NDA Agreement which is clear, prima facie evidence that she lied, a felony!

The American people need to understand thatthe FBI does NOT allow FBI agents to do the things that Peter Strzok, Andy McCabe, Lisa Page and other high ranking FBI sworn officials did! Comey had to be involved…no way around it! Many of their acts are fireable offenses. Some are definitely criminal, some may even border on Treason, acts that aided and abetted our enemies by distracting the FBI  from discovering the criminal acts that were committed by Russians DURING the election rather than AFTER the election, and the Russians ran back to Russia! The FBI could have prevented those acts that Mueller just indicted 13 Russian Officials for doing. If the FBI attention were directed toward the Russians and not Carter Page and the Republican Party, they could have arrested the Russians while they were committing the crimes they are indicted for—think about that, Mueller! By the way, as things stand, Mueller could have indicted 13 Cocker Spaniels for peeing on the White House lawn and it would have had as big an impact and cost a lot less.