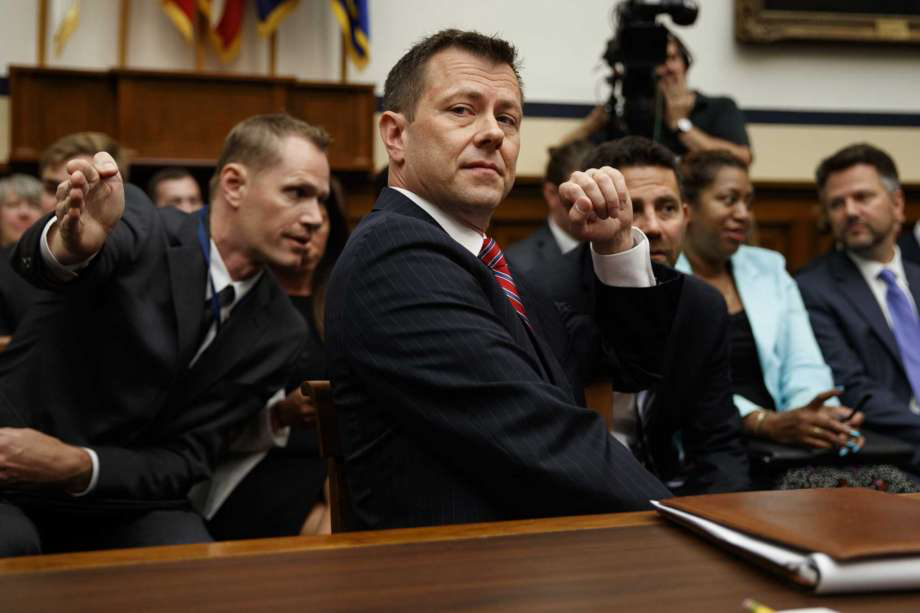 It didn’t take me long to figure out what exactly Peter Strzok is made out of, what his motives were and why he did what he did. All I did was watch him and listen to what he said.

About 2 years ago, when I first started getting bits and pieces of the Clinton investigations, personal email server and email cases, I could not believe the inept, unprofessional way the investigation was being conducted. I wrote numerous columns for the Niagara Falls Reporter, stating that these cases were being run by someone who either has no criminal experience, or is intentionally trying to sabotage the cases, noting the granting of immunity to subjects without a sitting Grand Jury or GJ testimony, the lack of search warrants on Clinton staff members whose emails demanded searches into personal computers and “hard “ interviews, subpoenas that were ignored by the freaking person who set up the entire personal email offsite computer —WITH NO RECOURSE! —and, many other blatant protocol lapses. Without any idea who was directing the Clinton cases, I never heard the names Strzok or McCabe, but knew that something was extremely amiss!

About Peter Strzok, I know as much about him as you do and that is almost nothing, except that I know what he should have done and should not have done, as an FBI Agent.

In my opinion, Peter Strzok never worked any criminal cases of substance and probably never brought a violent criminal case from unsolved to solved with arrests, search warrants, arrest warrants, Grand Jury, hearings, discovery, forensic evidence examination, trial, convictions and sentence — all the things that go to teach an Agent that you can’t create evidence, hide evidence, “salt” interviews, withhold critical information in an affidavit for ANY search and seizure, or overhear warrant applications, interview subjects in front of other subjects and attorneys and witnesses! NO criminal FBI Agent would do the corrupt things Strzok did, nor would an experienced agent do what he did even if ordered by a higher authority.

In my opinion, Peter Strzok fabricated a Russian Counter Intelligence Investigation, mislead the FISA Court , obtained overhear warrants on a US private Citizen without sufficient probable cause to obtain a legal wire tap warrant and did his best, as a sworn official of the highest law enforcement agency in the country, to sabotage a presidential election and taint the biggest criminal investigation of an U.S. Official in U.S. history, former Secretary of State Hillary Clinton.

Hillary’s money then hired Fusion GPS to obtain “opposition research” on her opponent, Donald Trump. Ultimately, Fusion GPS hired Christopher Steele who wrote a “Dossier” which has been characterized by the then FBI Director, James Comey, as “salacious and unsubstantiated”. Comey was Strzok’s boss! The foundation of the Dossier is based upon 2nd,3rd,and 4th, hand hearsay and unfounded information about then Republican candidate Donald Trump. Three versions of the Dossier make their way to Peter Strzok, and the FBI, according to his testimony. Oddly enough, one was given to Senator John McCain, who apparently holds great animus toward Trump as he gladly gave it to the FBI (what a loyal American and fine example of an unbiased US Senator!) We don’t know who gave it to McCain, but he should have tried to verify something as a standing, or sitting, U.S. Senator, realizing that the Republicans are in a battle with the the Clintons,the most corrupt family the country has ever known. He should have done some vetting! Anyway, our hero, 007 uses a Document that a moron would know is, at the least, very suspect, as the basis for a FISA warrant!

Strzok says he was the Number One FBI Agent in charge of Foreign Counter Intelligence in the United States for the FBI and supervised every counter intelligence investigation in the FBI. That, folks, is a very scary thought because this guy had the time to send some 30-50,000 texts in a year, or over 600 per week, or 120 per day, with many of them personal, and sent to and from his lover Lisa Page. He also says he was lead Agent on both the Clinton email case AND the Collusion case until Mueller fired him. I believe that Strzok did initiate the Carter Page, Russian collusion investigation and was instrumental in the FISA court warrants.

I can tell you from my experience, Peter Strzok  (or 007 as I think he believes he is) could not possibly supervise the nation’s counter intelligence cases, the Hillary email cases, the Russian Carter Page case when, as an Agent, he couldn’t find his own ass with his own two hands. A first office agent could have “made” the email case. It is a prima facie case, dripping with paper trails!

He intentionally kept Hillary’s name out of the case Title as the Subject. I’d like to know how the hell he managed to do that! Strzok sabotaged the Clinton case, no doubt!

Now, here we have a brand new FBI Director who knows nothing about this FBI, from within, except for what those around him tell him. Who were they, McCabe and Strzok and those hired by Strzok and McCabe? Sure, McCabe was fired, but not by Wray! Why not? Why the hell wasn’t Strzok fired? Why do some of these people still have security clearances?

Why did Director Wray authorize FBI lawyers to accompany Strozk and McCabe when testifying? Why aren’t there criminal cases being worked against these two heroes out of USA Districts outside of DC??

Mr. Director, you are getting BAD information. You need to seek help from some former agents, now! Also, if Strzok was in charge of all our counter intelligence cases, you had better put a team of real agents on those cases and do some serious auditing without further delay!