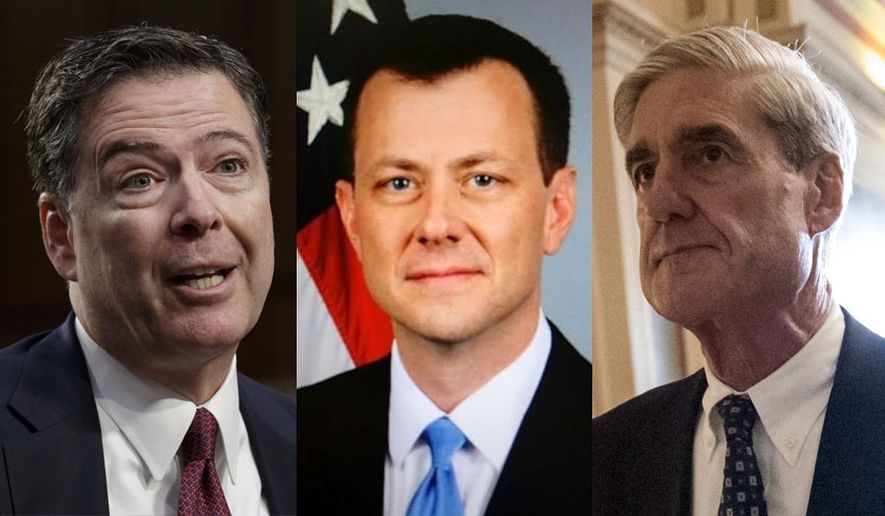 By Tom Fitton
President Judicial Watch
If you watched disgraced FBI Agent Peter Strzok bob and weave around the truth in his testimony to Congress this week you will understand our difficulty in getting Strzok’s official communications out of the FBI/Justice Department.We don’t give up, however, and we are succeeding.

We just released 87 pages of records from the Department of Justice revealing former top FBI official Peter Strzok and FBI attorney Lisa Page’s profanity-laced disdain for FBI hierarchy and policies. The DOJ, meanwhile, is resisting our request for a court order to preserve all responsive Page-Strzok communications.

Strzok and Page’s anti-Trump text messages became center-stage amid allegations of bias at the bureau, and both were subpoenaed to testify before the House Judiciary and the Oversight and Government Reform Committees.

We obtained the documents through a January 2018 Freedom of Information (FOIA) lawsuit filed after the DOJ failed to respond to a December 4, 2017, FOIA request (Judicial Watch v. U.S. Department of Justice (No. 1:18-cv-00154)). The lawsuit is seeking:

The new emails came in response to a May 21, order by U.S. District Court Judge Reggie B. Walton for the FBI to begin processing 13,000 pages of previously undisclosed records exchanged exclusively between FBI officials Strzok and Page between February 1, 2015, and December 2017. The first 500 pages of records are to be processed by June 29, 2018. This process will take over two years to complete.

Emails between Strzok and Page include conversations about a change in FBI policy that eventually would allow companies to discuss National Security Letters, which are secret non-court issued subpoenas for records:

Subject: RE: FBI to Allow Companies to Reveal When They Receive National Security Letters

Sigh. This is the third conversation I will have had with him or someone on his staff about this.

On February 9, 2015, in a discussion of an article about how the Department of Defense may have unwisely used an Arabic translator in a Guantanamo hearing who had also been used as a translator at a CIA black site, Strzok says, ‘I cannot begin to describe the amount of f*ckupedness if true…’ Page replies, ‘I know. I heard about it on npr on my way home tonight. Multiple mentions of the FBI’s infiltration of defense teams last year too.’

On June 1, we filed a motion for preservation order in this case asking the court to order the Department of Justice to prevent both Strzok and Page from deleting any incriminating records of their communications. We argue that several of the text messages produced to Congress reference work-related communications between Strzok and Page through personal accounts.

We noted that in January, the DOJ told Congress that the FBI had neither requested nor searched information from the personal accounts of Strzok and Page. We argued:

In a January 25, 2018 letter to Senator Charles Grassley, Charles Thorley, Acting Assistant Director of the FBI, wrote, ‘FBI has not requested from Ms. Page or Mr. Strzok any information from their personal email accounts, nor has the FBI conducted searches of non-FBI issued communications devices or non-FBI email accounts associated with Mr. Strzok or Ms. Page….’

Not until May did the FBI say it had written Strzok and Page lettersasking them to preserve the communications but there have been no assurances that this was even done:

[Judicial Watch] has asked for copies of those letters and of any responses it has received from Strzok and Page. [DOJ] refuses to provide any evidence supporting this assertion.

[Judicial Watch’s] request is nothing out of the ordinary. At least three other judges of this Court have granted such requests in the last 18 months.

We are in court successfully getting Strzok-Page documents thus far denied to Congress. Yet the Justice Department is stonewalling and even protecting Strzok and Page by battling our request for preservation order to ensure that no government documents are destroyed.

The rules for immigrating to America have been articulated by Michael Savage and are logical and very simple.
FISA DOCUMENTS ON CARTER PAGE-WHAT DO THEY REVEAL?-THE PRESIDENT “MUST” TAKE OVER, THAT’S WHAT!
Comment