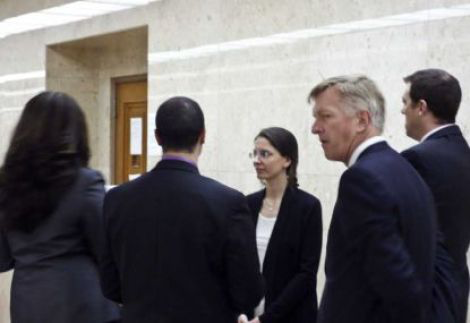 Clare Bronfman used her enormous wealth to destroy others – using the court system as her weapon of choice – it gave many people joy to see the courts turned to good use at last today.

And she who has the least joy loses, I believe.

According to the Albany Times Union, “Prosecutors filed a memorandum Tuesday outlining details of the alleged crimes against Bronfman. They said she conspired to commit identity theft, facilitated Raniere’s use of his deceased girlfriend’s [Pam Caftriz American Express] credit card, and led efforts to discredit Raniere’s alleged victims.”

She was a pip all right.

You’ll pardon me perhaps a moment to win through joy – for I was one of her victims. She went into a grand jury in the Western District of New York and lied about me – leading to my indictment. I always thought this was a brutal and ruthless thing to do  – after I recovered $26 million in assets for her.

Finally, it might be a little cheeky of me to mention it – but I believe I predicted this day – about a year ago – and repeated the predictions on numerous occasions on this very website.

Furthermore, I asked all of the individuals presently indicted to leave the cult – at one time or another.

I also met in person with Clare Bronfman – in the offices of Aronowicz and O’Connell – in the presence of her attorney William Savino – and suggested that she not go after me – for after all – I had done her only good.

Clare ignored my good efforts to help her again.

Attorney Steve Pigeon and Clare’s attorney John Bartolomei advised Clare and Keith Raniere that they should not go after me – for I would fight back.

The message Pigeon got back from Keith is that he “was afraid of Frank Parlato.”

Pigeon said, “No I’m not afraid of Frank Parlato – you should be afraid.”

He was ignored, of course – for who was I against the all powerful Vanguard [backed with Bronfman wealth]..

Finally I tried to reach out to Keith before I was indicted and asked him not to go after me – for I would not simply fight in court – I would fight with the pen. This was before I knew about the branding.

He scoffed at the idea of me being able to puncture his brilliance. He was arrogant.

I said to Keith “you hired me as your publicist – then you fired me unjustly. I tried to work it out with you. You declined. But the good news is that I am not quitting as your publicist. I will continue to work to make you famous. You and Clare.”

Many helped us to achieve this day – Toni Natalie, Barbara Bouchey, Susan Dones, Joe O’Hara, Catherine Oxenberg, Mark Vicente, Sarah Edmondson and many others. I thank you all. It could not and would not have been done without all of your help and the help of the media.

But in my own little way, I am proud because I fulfilled the task for Keith and Clare.  I helped get them more publicity than they ever had in their lives.

That’s what they hired me for.