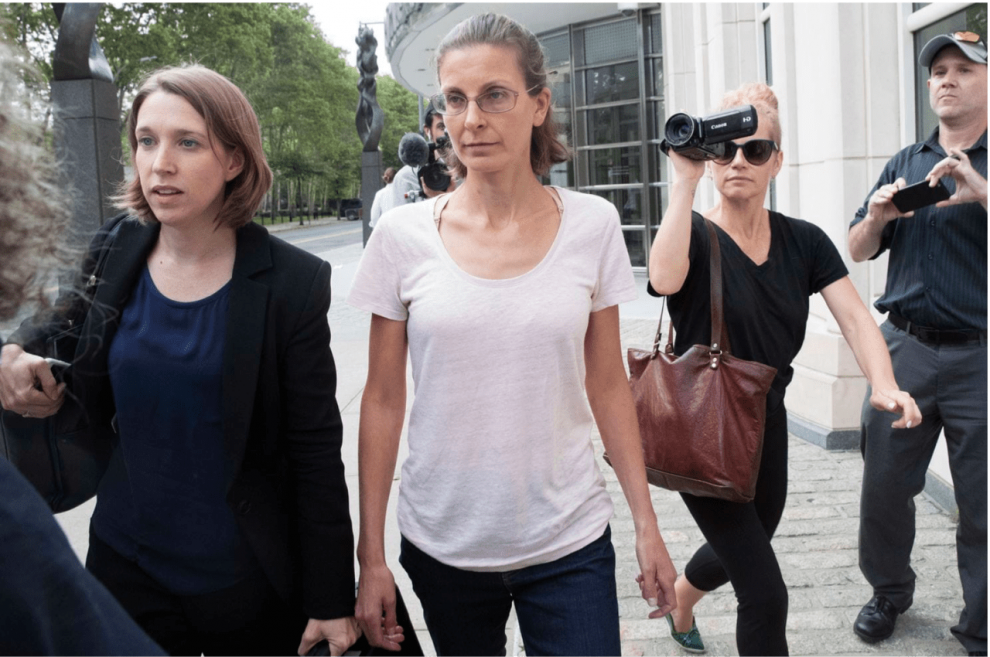 Clare Bronfman may not be home free on making her $100 million bail. She has until Friday to meet all the terms the judge imposed or off to jail she goes.

Bronfman listed assets of less than $200 million — $100 million of it in a trust – which she claims she does not have control over.

The judge looked quizzically at her net worth statement and asked where her Fiji Island property was listed?.

Her lawyer, Susan Necheres, said Clare did not list it because it is being renovated [as if that were an excuse for not candidly listing all her assets.]

The judge rolled his eyes and Clare’s lawyer claimed the property is worth $47 million.

But that was just the beginning of her troubles.

Clare has to be in court again tomorrow and again on Friday – and Friday is D-Day for Miss Bronfman.

She must appear with one of her trustees of her $100 million trust account. [the attorney for the trust account – a woman – and recently having given birth – will be allowed to appear by phone.]

Clare must also appear with Sara Bronfman – in person – who must get here by Friday – from France.

The Judge demanded a $100 million bond – $50 million in liquid assets and he said,  he wanted two guarantors on Friday; two people to sign as guarantors- one of them can be Sara Bronfman – and the other must be someone unrelated to NXIVM.

Clare’s attorney said it was tough for Sara to come to New York for she has two children.

The judge said she could bring her children with her to New York and since she is going to co-guarantee $100 million bond for her sister – the judge said – she can afford to come here.

The judge required that Sara and someone else with significant assets must sign on Clare’s behalf – and if they are not there by Friday, Clare will go to jail.

Clare’s attorney said she has been in touch with the Feds to cooperate – but the Feds said that is only because the others were arrested. They said Clare moved several times recently and they had trouble finding her.

Clare’s lawyer said she has an apartment in the Southern District of New York [NYC] and that will be where she will stay on home arrest. Her lawyer said Clare took the place in NYC because she knew her indictment was inevitable and wanted a place to live near her attorney and the court.

The judge said she can have no contact with anybody in NXIVM between now and Friday when she appears to establish her $100 million bail. Her lawyer objected saying the members of NXIVM are her family and her whole life.

The judge asked doesn’t she have Netflix?

The judge added, “We’re only talking about till Friday.”

AUSA Moira Penza stepped in to say she did not want Clare talking to witnesses, potential witnesses or co defendants.

Clare’s lawyer said Clare has to talk to her sister, Sara, who is a NXIVM member.

The judge asked Moira if she minded if Clare talked to her sister.  Moira had no objection.

As the hearing unfolded, the shocking truth was revealed that Clare Bronfman has squandered much of her inheritance.

She has some $98 million in assets other than the $100 million trust and only $22 million is readily accessible and of that she has only $3 million cash on hand.  She inherited all together an estimated $600 million from her grandfather – notorious criminal Sam Bronfman and her late father, Edgar Bronfman Sr., former president of the World Jewish Congress.

Clare blew through hundreds of millions of her money for NXIVM and now has a net worth of only $198 million – and that promises to be far less in no time at all.

In giving Clare three days to come up with bail, Clare was treated far better than Allison Mack – who had to spend three days  in jail – while her parents scrambled to make bail. Clare is out tonight, wearing an ankle monitor – while Sara and someone as yet unnamed must come on Friday.

It remains to be seen if Clare Bronfman will actually make her $100 million bail on Friday.

I do not take this as a certainty.

Click here to post a comment
Laura Darby: Some neighborly thoughts on Nancy Salzman and co.
Photo Essay: She who has the most joy wins – and pictures prove it – for Clare Bronfman