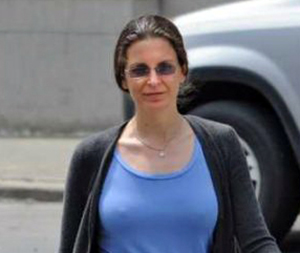 In Brooklyn, Clare Bronfman’s attorney entered a not guilty plea on behalf of her client.

Bronfman is due back in court on Wednesday (tomorrow) for a status conference with her co-defendants before Judge Garaufis at 2 p.m.

In Albany, the three defendants entered not guilty pleas to the superseding indictment.

Magistrate Judge Stewart agreed to release Kathy Russell on a $25,000 bond; and the Salzmans mother and daughter each on $5 million bonds.

My latest information is that Russell and Lauren Salzman have not met all the conditions of their bonds and may not be released today. That means they spend the night in prison.

Russell – based on what she is charged with and federal guidelines – faces 3 years in prison.

Russell and Lauren Salzman appeared in court in shackles and Russell was handcuffed in front. Nancy Salzman walked in to court on her own volition – without handcuffs.

Clare Bronfman was arrested earlier today – and was handcuffed..

As of right the only one who is Bronfman. The other three are in still in federal custody. Nancy is expected to be released today. But even the Prefect may have to spend the night in jail – if so they may all have to undergo full body searches.

Click here to post a comment
A few words on ‘Legatus’ – Clare Bronfman – who brought me out to fight!
Nancy Salzman – granted $5 million bail – tells court she is facing life threatening illness