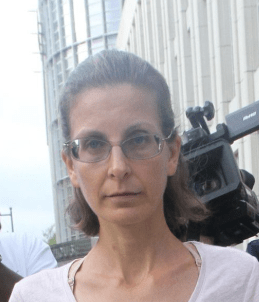 From the Albany Times Union we learn — Federal prosecutors asked [US Magistrate Judge Daniel] Stewart to set bond for [Kathy] Russell at $50,000, but he lowered it to $25,000 at the request of her attorney, William Fanciullo.

Fanciullo told the judge that Russell had very little cash, a car worth about $8,000 and no assets. Of course this is true – she was a member of NXIVM and took Executive Success Programs-  so of course she is poor.

He said she lives in a Clifton Park apartment.

“She is a 60-year-old woman,” Fanciullo told the judge. “She has next to no money. … Her release poses no danger to anyone or to the community.”

But prosecutors disagreed. They said Russell, who has an accounting background, is known for her ability to travel long distances and helped commit identity theft and aiding in an illegal border crossing.

She’s a wily woman – they said.

My take on Kathy is she is there with the much more guilty defendants because her name was on a lot of things [I warned her that Keith was setting her up for the fall] and also because as a low level, low paid, bookkeeper – she could turn easily enough and help the prosecution. She is not much of a gain to the feds – except of course if she flips.

Which she likely will.

Which reminds me that Karen Unterreiner was not arrested. This suggests she is either cooperating with the Feds or more arrests are coming. Indeed Kathy Russell worked for Karen and dod what Karen told her to do.

In this respect Karen is far more guilty than Kathy.  What has she not been charged and only Kathy?

The prosecutors said Kathy took part in a scheme to help obtain computer user names and passwords of people “believed to be NXIVM enemies,” prosecutors said. But so did Karen.

So my hope is that Karen has flipped.

As for the Salzman’s — it looks like Lauren will enjoy the night at the Rensselaer County jail. The judge agreed to her release on $5 million bond. Her grandparents — traveling from New Jersey to Albany have to post $50,000 in cash to secure the bond for the enthusiastic NXIVM leader – who was in charge of education.

Evidently the arrangements could not all be made by the time the clerk left for the day.

Lauren’s mother, Nancy Salzman was to be released on bail pending execution of a $5 million surety bond that was to be signed by her parents and a friend, Capital Region resident David Messing.

David Messing may be a relative of Steve Messing, a dentist, who is a long time friend of Nancy Salzman.

We do not know if Nancy was released. She may be also in jail – tonight.

Both of the women will have to be in Brooklyn tomorrow and the question is – how will they get there – by their own conveyance – or in handcuffed and shackled – and escorted by US Marshals.

Russell remains in federal custody – being at the moment – unable to make bail – and will likely appear tomorrow in cuffs – in Brooklyn.

Today she appeared in court looking gaunt and tired and frankly – old. Her chances of becoming the Prima Donna for a major ballet company – as her Vanguard – Keith Raniere – promised – seems to have evaporated – and while everyone else but her knew it in the past – the look on Kathy’s face today signaled that she too knows that her Vanguard will be unable to deliver her ballerina break through fame she so coveted at age 60.

All of the defendants were described as flight risks by federal authorities, and if they make bail – all of them will be on home detention and electronic monitoring – and that includes the woman referred to by some as Legatus – the sinister and brutal Clare Bronfman.

According to the Times Union, “Lauren Salzman’s alleged crimes include trafficking a victim for forced labor, including helping facilitate the captivity of a Mexican woman who was Raniere’s sexual partner; the woman was allegedly locked in an apartment [at 12 Wilton Court] for more than a year [18 months] as punishment for showing interest in another man [Ben Meyers].

By the way, Ben Meyers and his wife, Michelle Salzman were seen in court today in Albany to watch Nancy and Lauren reap the fulsome benefits of Executive Success Programs.

Ben – who may yet be indicted – was the amorous object of the unfortunate woman imprisoned by Raniere. Passive Ben was willing to give up the woman and accept instead Michelle Salzman – sister of Lauren and daughter of Nancy – who Raniere rejected.

Prosecutors said Lauren Salzman was a “first line master” in the DOS slave-master group, and led efforts to disseminate misinformation about the secret group to discredit victims who defected.

Lying was her middle name.

Photo Essay: She who has the most joy wins – and pictures prove it – for Clare Bronfman
A few words on ‘Legatus’ – Clare Bronfman – who brought me out to fight!