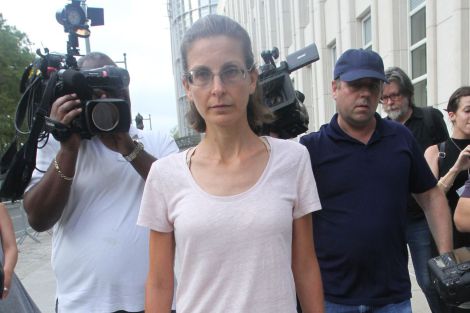 According to a courtroom source – Nancy Salzman, Lauren Salzman, and Kathy Russell spent the night in jail yesterday following their arrest in the Federal NXIVM crime prosecution.

None of the ladies could get their bail package together in time to be released.  So off they went from the Marshall’s custody to the County jail for the night.

Nancy and Lauren have family and friends – who together will likely muster the $100,000 [combined] they need to post in cash. It’s not very much really – yet they could not be released  – on their word – and given a day to come up with bail money they assured the court was forthcoming from family and a friend.

Poor Kathy Russell – all she needed was someone to come up with a mere $2,500 – but she was sent to a cage – with the understanding that she might stay there until trial – for want of $2,500.

Clare Bronfman was tens of millions shy of making her bail – and has to depend on her sister coming from France and finding another non-NXIVM co-guarantor – for her $100 million bail. She was not inconvenienced with a night in jail.

In this instance, we see a woman – alleged to be equally – if not more – guilty than the other defendants – treated disparately.

Nancy, Lauren, and Kathy spent the night in jail – on a hard bed – and awoke to prison breakfast – and the requirement to be in Brooklyn Court today – fresh before the judge, the prosecutors, and the eyes of the world.

Clare went home to her luxury apartment. She will arrive to court escorted by her attorneys.  Kathy, and possibly Nancy and Lauren, will likely arrive in custody – in handcuffs and shackles.

For my own part, I keep thinking of Kathy Russell – a 60-year-old woman – who wanted to be a ballerina – listening to Keith Raniere – following the orders of Clare Bronfman and others – languishing in a prison cell – for lack of ability to raise $2,500.

Clare probably paid more than $2,500 for her attorneys appearance at her bail hearing.

In the coming prosecution, I suspect we will see instances of favoritism for Clare Bronfman.  There are many who say she will not have to endure a single day of prison.  I think we have an interesting opportunity to watch the US justice system at work. Apropos of that, I wonder, who will ultimately spend more time in prison – the low level bookkeeper Kathy Russell or her chieftain, Clare?