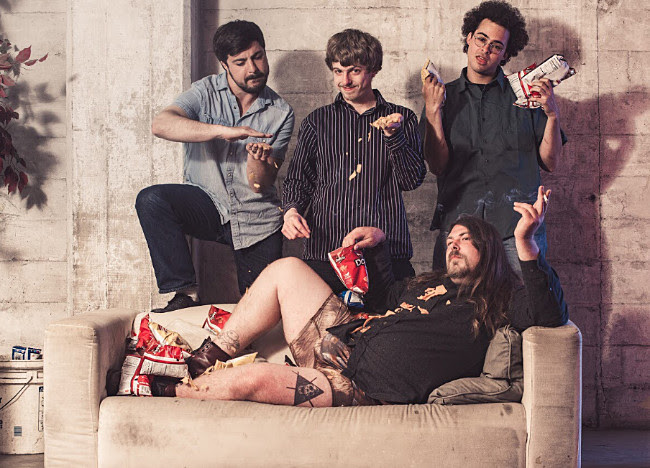 and touring this fall.

So what’s left to feel about Nopes‘ new album that can’t be felt via a 20-hour meth-fueled psycho-binge that leaves screen doors kicked through and puppies hiding in closets?

The Vinyl District call the album and band:

“Heavy as one of those big-assed weights from the old Tex Avery cartoons where some dastardly nogoodnik was going to drop it on somebody else’s head… but still they spastically rage, with the vocals mixed so low at times that I’m checking my watch to see if it’s 1992, and where’s my Amphetamine Reptile t-shirt?  Some fucker stole it, I bet.”

A sentiment Echoes and Dust shares, saying of the album:

“It is ragged, world-weary and loud. It is infused with the apathy born of late nights, bad food, alcohol and ringing ears. But amid the distortion and despondency, it also contains some of the catchiest major-chord punk tunes you are ever likely to hear.”

The album’s first single, “Immersion,” and its nutty video ode to 20th century no-budget sci-fi flicks, premiered via Post-trash at this location.

Summarizing their own thoughts on the new album, the band expound:

“A sequel to Never Heard Of It, originally titled ‘Sounds Familiar,’ this record is a soundtrack for chain punks to suck on fat ass eggs to.”

There you have it.

Formed as an outlet for relief from the stresses of everyday life and heavily influenced by the SST punk that resonated up and down the California coast, The Nopes waved a white flag to the area’s indie scene and branched out in a nastier direction. They banged out a name for themselves with highly energetic, profusely sweaty shows while touring away from the Bay Area as much as possible. Over the years, the group perfected a sound that’s at once cacophonous and instantaneous.

Pitchfork included The Nopes’ Never Heard of It on their Best Underground Punk Records of 2016list, calling it an “impressive debut” and “an uneasy record that packs fury, frustration, and constant motion.”

Sure to satiate fans of sharp-edged, unapologetic punk chaos, and following in the sneering tradition of Circle Jerks, Descendents, and Dead Kennedys, Stapler is a solid half-hour of furious, jagged, spazzed-out blasts that shred speaker cones and smack you in the face with biting societal awareness, often in under two minutes.

These compact odes to apathy, cults, self-doubt, throwing rocks at luxury cars, obscure West Virginian Cryptids, and election time robo-calls are perfect listening for the downfall of humanity and the devolution of the Doritos taco.

More than other garage-adjacent punk records, the players are distinct enough to animate a dozen tracks: the rhythm section swerves and strikes like boxers, in unison, until violently entangled. –Bandcamp / Terminal Consumption

Fueled by wanton sugar intake, Bowie, corner store liquor and well-worn copies of Negative FX and Bad Brains vinyl, The Nopes produce blasts of raw punk energy that explode out of a vacuum into guitar-buzz, amp fuzz and juvenile delinquency, hearts burning with the fun and fury of being young, gifted and ultimately unaccountable. – New Noise Magazine

The band will self-release the album on vinyl LP in cooperation with their pals at Discontinuous Innovation very shortly, and head out on tour in the Southwestern and Southern United States this October:

Mickalene Thomas: I Can’t See You Without Me opens at the Wexner Center for the Arts September 13
Vintage Heavy Riff-Rockers WHITENAILS debut new video for single “Shanghaied” via Metal Injection