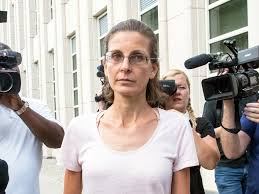 Clare was dressed in a black long-sleeved shirt and baggy slacks.

Basit Igtet, at one point, gave his sister-in-law’s shoulder a squeeze, while mom, Rita Georgiana Webb-Bronfman- Havers — who is married to actor Nigel Havers — sat next to Clare, before the hearing began.

Clare’s defense attorney Susan Necheles said of Igtet and Clare, “Their relationship has been strained but he is married to Miss Bronfman’s sister and is committed to her.”

A blubbering Clare, wiped tears from under her glasses when Judge Nicholas Garaufis reminded her mom and brother in law that they’re there to keep her honest.

“I think she knows the responsibility as well,” said Basit Igtet. “She appreciates what we have taken on for her.”

The $100 million bond likely won’t be finalized for weeks, because prosecutors said they do not have an accurate picture of  Bronfman’s finances.

“We have records indicating there are two major trusts that were restructured in April 2018, we don’t know how many trusts were there before and we don’t know what happened to all of that money,” said Assistant US Attorney Karin Orenstein.

“There’s been no allegation here ever that money ended up in a secret account for Clare Bronfman,” she said. “There never has been any secret account.”

In court, Clare agreed to put up $25 million in cash and securities and several properties —including her private island in Fiji — as part of the collateral [and I use the word advisedly] on her $100 million bond.

The bail package includes a $4.2 million property in New York City, a $4 million estate in Ketchum, Idaho, a $13 million stake in the privately owned Fijian island of Wakaya, and three properties in Clifton Park and Waterford valued at $3.1 million, and a horse farm in Knox worth $1.4 million.

Bronfman, her mother, and her brother-in-law, Basit co-signed the agreement. Sara owns some of the property jointly with Clare.  They would lose the cash and all of the properties if Clare were to flee.

Bronfman, 39, is accused of stealing passwords of people perceived to be enemies of the group in an effort to monitor their communications, as well as helping NXIVM leader Keith Raniere use a dead person’s credit card account [Pam Cafritz], prosecutors said.  Clare allegedly helped compile detailed lists of NXIVM enemies, including email addresses and phone numbers.

One of the acts Clare allegedly did in the commission of her alleged felonies includes an allegation that she hacked into her own ,now-deceased father’s computer between 2005 and 2008.

The Albany Times Union first reported in 2015 that Bronfman had been accused of conspiring with Keith Raniere to secretly implant a “key logger” virus on the computer of Edgar M. Bronfman Sr., who died in December 2013.

The alleged hacking of Edgar Bronfman’s computer was done so that NXIVM member Ben Meyers and a young Mexican woman who was later imprisoned for 18 months by Raniere – could monitor Bronfman’s emails, including exchanges with Hillary Clinton.

Other allegations include that beginning in 2007, she and her sister, Sara, paid a Canadian investigative firm – Canaprobe – more than $1.8 million to illegally obtain financial records of U.S. Sen. Charles E. Schumer, D-N.Y., and six federal judges who had presided or were presiding over litigation involving NXIVM.

Clare faces up to 20 years if convicted of all charges but her attorney said that, under federal sentencing guidelines, she would face about 37 months in prison if convicted.

The Albany Times Union’s Brendan Lyons has another excellent story on the same topic: See:

Click here to post a comment
Raniere’s attorney speak up – call people who claim Raniere hurt them ‘crazy’, ‘wrong’, ‘not that many’
Kathy Russell and Lauren Salzman free – with less restrictive conditions than Clare Bronfman