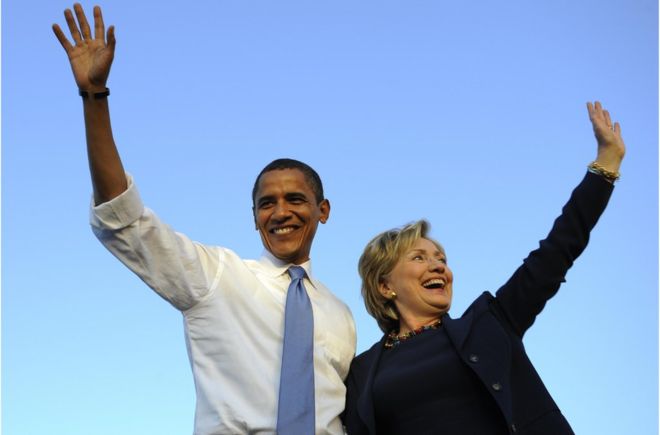 Answer…Hillary Clinton and Barack Obama! Remember the phrase everyone used to describe Communism… “The End Justifies The Means”? Which can be interpreted as, “Anything goes as long as you win”.Hillary and Obama took that to new heights when Hillary Clinton actually purchased the DNC. Here’s a quote from former DNC Chairwoman, Donna Brazile, taken from The Global Political , “Inside Hillary Clinton’s Secret Takeover of the DNC” by Donna Brazile , 11-2-17;

“When I got back from a vacation in Martha’s Vineyard, I at last found the document that described it all: the Joint Fund-Raising Agreement between the DNC, the Hillary Victory Fund, and Hillary for America.

The agreement—signed by Amy Dacey, the former CEO of the DNC, and Robby Mook (Hillary’s campaign manager) with a copy to Marc Elias—specified that in exchange for raising money and investing in the DNC, Hillary would control the party’s finances, strategy, and all the money raised. Her campaign had the right of refusal of who would be the party communications director, and it would make final decisions on all the other staff. The DNC also was required to consult with the campaign about all other staffing, budgeting, data, analytics, and mailings.”

What separates all that from Tyranny, Socialism, Communism and Islam? Not much! Think about that for a minute. Right now the “democrat Party” is grooming a Bernie Sanders wannabe from New York, Osacio Scores, for Congress, who cannot possibly know what she is doing. Her wide experience, that qualifies her, is her previous job as Community Organizer. We all know all too well how qualified that makes someone…a Community Organizer who wants to “change” America…to a Socialist Democrat country but she has NO idea what that really means, except free stuff! What it actually translates to is, no “equal rights, no Amendments ,no Bill of Rights, no Constitution…just a place where the only Rights the losers have are those that are “granted” to the losers by the winners! That’s what the left wing, red commie, pinko, “regressives” want but hide it behind words like “change” and “progressive”. That’s precisely what the then, Democrat Speaker of the House said when Obama won, “We won, so we get to make the rules”…Pelosi actually said that! Oh…she didn’t mean that…yea and chickens have lips!

Let there be NO doubt folks, your Democrat leaders want a Democrat Socialist America with no Constitution, no Rights for All and NO Constitutional Republic ( which guarantees equal rights for all, winners and losers)!

What “Democrat Socialist” means is, “elected” leaders who win get to grant the losers the Rights they can have and nothing more! The “elected” part doesn’t necessarily mean “honest elections” either, remember the “End justifies the means”,  like Clinton “buying” the Democrat party? Fortunately, enough Democrats who do believe in our Constitution, said, emphatically …NO! You elected Donald Trump and you have to say that you made a smart move! Just look at what goes on…no less than two Congressmen took their Oaths of Office on the freaking Koran, which is diametrically the opposite of our Constitution, to swear to “preserve, protect and defend”, the Constitution. Why hasn’t the ACLU filed suit against those who did that? The Koran calls for the destruction of your Constitution, you know; the separation of Church and State, and on and on, and if you don’t comply, “death to the infidels”, ever heard that before? I’ve read the Koran…it really says that and about 150,000,000 Islamic, Socialist, Muslims practice that! Ask Booker and Ellison, “Do you believe in the separation of Church and State”? If they say , “Yes”, ask , “What’s your book of faith”? If they say, “The Koran”? Call the your Congressman  and ACLU and ask them to sue Booker and Ellison for not honoring their Oath and to push for Impeachment, a word they both like to use!

What keeps us free… is our Constitution and our ability to defend it with the greatest Military in the world. Take away either, and what do we have…Democratic Socialism…which is what Schumer, Pelosi, Waters, Sanders, Clinton, Warren, Obama and MANY other elected Democrats, all want, for everybody EXCEPT…themselves!! There is no personal ownership in Socialist countries, except ,of course, the leaders!