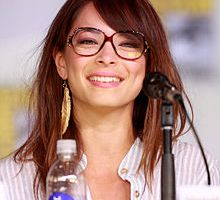 You can run but you can’t hide.  This is a lesson that Kristin Kreuk may yet have to learn. Following multiple articles in Frank Report – the Daily Beast is now calling it a ‘controversy.”  Amy Zimmerman of the Beast writes in How Actress Kristin Kreuk Is Dodging Her NXIVM Cult Past.
AMY ZIMMERMAN

“She’s starring in the new CW series, ‘Burden of Truth,’ playing a lawyer investigating a town of sick girls—and is refusing to answer any questions about her NXIVM ties.”

That says it all.  The hypocrisy is palpable.
Kreuk plays [and I emphasize the word “plays”] Joanna Hanley, a hotshot attorney who begins the series by representing a big pharmaceutical company that may have irreparably harmed a growing group of high schoolers – then turns heroine and decides to risk all to expose Big Pharma.

The Beast article reveals that in real life Kreuk is dodging questions about NXIVM.

“The 35-year-old actress has done a smattering of interviews around the CW summer premiere, discussing her role as executive producer and star of the show with headlines like ‘Kristin Kreuk talks her strong and passionate character.’ What these articles don’t cover is NXIVM, the sex cult that seized international attention this year with the arrest of leader Keith Raniere and Kreuk’s Smallville co-star, Allison Mack. Mack…  was reportedly introduced to NXIVM in 2006 by Kreuk. … When The Daily Beast reached out for an interview with Kreuk, a publicist for the CW responded, ‘We are not answering any questions about Allison Mack or NXIVM so I would need to make sure this is only about the series.’…

“Given the overlap between the real-life scandal Kreuk’s become associated with and the central themes of her new series, those banned questions could have led to a fascinating conversation.

“Kreuk was listed in a 2012 Times Union article about NXIVM’s “rich, powerful, and influential” members. Former NXIVM publicist turned whistleblower Frank Parlato wrote in a 2018 post that, in addition to recruiting friends like Mack, Kreuk had reportedly been a NXIVM coach. ‘As NXIVM’s former publicist, I know Kreuk was used as NXIVM’s star recruitment tool,’ Parlato wrote. ‘She was a draw for those who wanted to meet her. She made herself available to recruit. I recall speaking with one radio show host who was eager to meet Kreuk and agreed to promote a NXIVM a-Cappella event—if he could have Kreuk on the show. I set it up and he plugged the hell out of it, as I recall.’

“As if Kreuk’s character’s mission to protect an army of vulnerable young women wasn’t topical enough, this pilot seems to suggest that there’s something dark going on beneath the surface—some sort of psychic distress or underlying trauma that’s terrorizing the young women of Millwood.”
From what I glean the show – Burden of Proof – is a bit cheesy.

The Beast writes, “Kristin Kreuk does an admirable job forcing life into a character who’s been tasked with delivering lines like ‘litigation is war’ and ‘my retainer is usually 10K, but buy me a burger and I’m yours for an hour.’…”

As the Beast reports: “In a series of increasingly tight close-ups, we watch the lawyer [Kreuk] weigh her extreme guilt and curiosity against her desire to return to a place where you can order sushi on Seamless and there’s more than one kind of white wine. Eventually, disturbed when her waitress collapses and haunted by the words of a teen who she sweet-talked into taking a settlement, Hanley storms into the local law firm demanding a battery of CT scans.”

She is now ready to take on Big Pharma and find out the dark secrets – no matter what the cost!

My goodness, Kristin Kreuk plays one brave lady on TV – which, when contrasted to her sheer cowardice in real life, it seems rather humorous to watch her.

The show’s original network, CBC, referred to the series as ‘an Erin-Brockovich style legal drama.”

But let’s face it, Kreuk is no Erin Brockovich.

Click here to post a comment
It’s not over: Emiliano Salinas is FBI target now!
Arizona Mafia and NXIVM– Lauren Salzman’s criminal attorneys are from Arizona