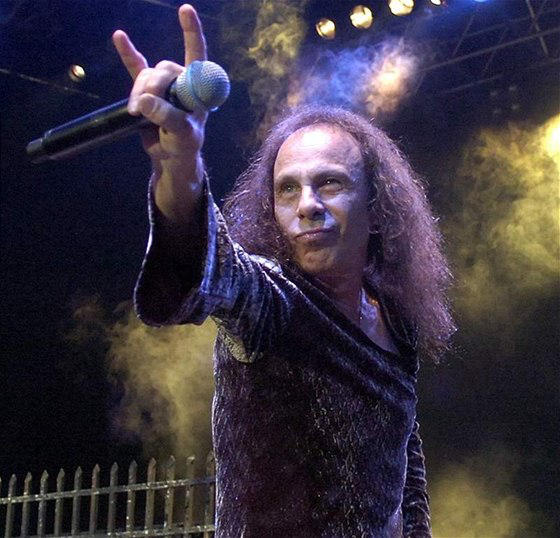 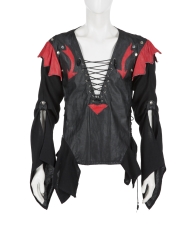 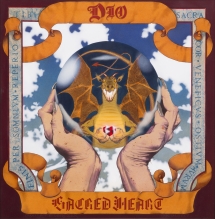 Los Angeles, California – (July xx, 2018) – Julien’s Auctions, the world-record breaking auction house, will pay tribute to one of the most influential heavy metal heroes and forefathers of the head-banging music genre with PROPERTY FROM THE ESTATE OF RONNIE JAMES DIO, taking place Friday, September 14 and Saturday, September 15 live at Hard Rock Cafe in New York and online at juliensauctions.com. (photo left to right: Dio’s stage worn shirt and Barry Jackson painting used as cover of The Last in Line album and Charvel guitar)

Born July 10, 1942 in Portsmouth, NH and raised in Cortland, NY, Ronald James Padavona, whom the whole world would later revere as Ronnie James Dio or simply Dio’s powerhouse falsetto voice, commanding stage presence and impact on the genre and fandom–from his signature horn salute to his style of wearing black t-shirts–would catapult heavy metal’s trajectory into pop culture iconography. Dio began his music career at the age of 5, where he played the trumpet and listened to opera particularly American tenor, Mario Lanza.

It was in high school that he formed his first rock-n-roll group, The Vegas Kings, which later was changed to Ronnie & The Rumblers then to Ronnie and the Redcaps and eventually Ronnie Dio and the Prophets. In 1967, the band became known as The Electric Elves, which was shortened to The Elves until 1972, when they released their first official album under the name of what would be known as one of heavy metal’s great early 1970s bands, Elf. When Elf toured as a regular opening act for the legendary heavy metal band, Deep Purple, Dio caught the attention of the group’s lead guitarist Ritchie Blackmore who invited Dio and other Elf musicians to form the band that would eventually be known as another ultimate heavy metal band, Rainbow.

During his time with Rainbow, Dio demonstrated his mythical lyricism on all of the songs written for the band, another signature hallmark of his craft. Dio left Rainbow in 1979 to join the supreme heavy metal band, Black Sabbath, famously replacing lead singer Ozzy Osbourne. Dio displayed his songwriting prowess once again on the song, “Children of the Sea,” co-written with Sabbath guitarist Tony Iommi and bassist Geezer Butler which would appear on the Heaven and Hell album (Warner Bros., 1980), the first Black Sabbath album that would feature Dio as vocalist. (photo right: Dio’s suede vest) Other prominent albums Dio would be featured on with the group included Mob Rules (Warner Bros., 1981), Live Evil (Warner Bros., 1982) and Dehumanizer (I.R.S., 1992) which hit the Top 40 in the UK and #44 on the Billboard charts and was featured in the hit movie Wayne’s World (Paramount Pictures, 1992). In 1982, Dio and departed Black Sabbath drummer Vinny Appice formed the band Dio and toured extensively and produced numeroushit albums including their debut Holy Diver (Warner Bros., 1983) that included the hit singles “Rainbow in the Dark” and the album’s title track “Holy Diver,” The Last in Line (Warner Bros., 1984), Sacred Heart (Warner Bros., 1985), the live album A Special from the Spectrum (Warner Music Group, 1984), Master of the Moon (Sanctuary, 2004) and more.

In 2006, Dio with Appice joined Black Sabbath members Tony Iommi and Geezer Butler as the Heaven & Hell band and toured and recorded extensively in the next four years producing critically acclaimed and new hit songs on the albums Black Sabbath: The Dio Years (Warner Bros., 2007) and The Devil You Know (Rhino, 2009). Dio’s last performance with Heaven & Hell was on August 29, 2009 in Atlantic City, New Jersey. He died on May 16, 2010 of stomach cancer and his death was mourned by thousands of fans, critics and music artists around the world.

Throughout his career and after his death, he received many accolades and recognitions including Classic Rock Magazine’s Metal Guru Award in 2006; induction into Guitar Center’s Rock Walk of Fame in Hollywood in 2007; “Best Metal Singer” at the Revolver Golden God Awards in 2010; the street Dio Way named after him in Cortland City, NY; a Dio monument in Kavarna, Bulgaria; Mexico’s biggest metal fest naming of “Hell and Heaven” in his honor; holograms of his likeness playing at several international heavy metal festivals; Jack Black’s band Tenacious D’s song written about him titled “Dio” and more. A tribute album This is Your Life was released in 2014 and included Tenacious D’s rendition of “The Last in Line” which won that year’s Grammy Award for Best Metal Performance. On January 18, 2017, Dio was inducted into the Hall of Heavy Metal History.

“Dio stands atop the colossal rock legends of our time as the definitive heavy metal hero whose voice, style and persona influenced heavy metal and today’s music icons like no other,” said Darren Julien, President/Chief Executive Officer of Julien’s Auctions. “Julien’s Auctions salutes Dio’s enduring legacy in this larger than life collection of his artifacts that will surely be the ultimate metal auction of the season.”

Highlights of this auction include: several pieces of original album artwork including the acrylic painting by Barry Jackson used as the cover for the 1984 Dio album The Last in Line (estimate $20,000-$30,000); his pair of moon and stars patchwork jeans worn extensively on stage with Rainbow (estimate $2,000-$4,000); Dio’s custom made violet suede vest with tails and red leather shin guards worn on stage and in promotional photographs for the 1985 Sacred Heart Tour (estimate $2,000-$4,000); a personalized Black Sabbath hooded velour robe from the 1981 Mob Rules tour worn regularly back stage (estimate $1,000-$2,000); Dio’s personal rolling wardrobe case (estimate $800-$1,200); some of the most ambitious and spectacular stage design rock has ever seen with props such as a monumental animatronic sphinx on plinth base from the 1984 The Last In Line tour (estimate $2,000-4,000) and a massive animatronic dragon’s head from the 1985 Sacred Heart tour (estimate $3,000-5,000); an array of Dio’s studio and stage used instruments and gear such as a custom Charvel guitar featuring a one-of-a-kind wizard paint motif (estimate $3,000-$5,000);  a 1978 “Gold” record award commemorating Australian sales of the Rainbow album Rising (estimate $600-$800) and a 1978 “Gold” record award for the album Rainbow: On Stage (estimate $600-$800) and more.

Property From The Estate of Ronnie James Dio

Property From The Estate of Ronnie James Dio

REGISTERING TO BID
Registration is required to bid in this online auction and can be done in person at the exhibition, or online before the sale at the JuliensAuctions.com Registration page to bid by phone, proxy or in person, or online at JuliensLive.com to bid live online, or by calling (310) 836-1818.

PLACING BIDS
There are four ways to bid in this sale:

Julien’s Auctions is the world-record breaking auction house. Collaborating with the famous and the exclusive, Julien’sAuctions produces high profile auctions in the film, music, sports and art markets. Julien’s Auctions has received international recognition for its unique and innovative auction events which attract thousands of collectors, investors, fans and enthusiasts from around the world. Julien’s Auctions specializes in sales of iconic artifacts and notable collections including Marilyn Monroe, John Lennon, Ringo Starr, Lady Gaga, Banksy, Cher, Michael Jackson, U2, Barbra Streisand, Les Paul, Neil Young, Elvis Presley, Frank Sinatra, Jimi Hendrix and many more. In 2016, Julien’sAuctions received its second placement in the Guinness Book of World Records for the sale of the world’s most expensive dress ever sold at auction, The Marilyn Monroe “Happy Birthday Mr. President” dress which sold for $4.8 million. Julien’s Auctions achieved placement in the Guinness Book of World Records in 2009 for the sale of Michael Jackson’s white glove, which sold for $480,000 making it the most expensive glove ever sold at auction. Based in Los Angeles, Julien’s Auctions has a global presence bringing their auctions and exhibitions to targeted destinations worldwide including London, New York, Las Vegas, Japan and China. Live auctions are presented for bidders on-site and online via live streaming video and mobile technology. For more information on Julien’s Auctions, go to www.juliensauctions.com. Connect with Julien’s Auctions at www.facebook.com/JuliensAuction or www.twitter.com/JuliensAuctions or www.instagram.com/juliens_auctions.