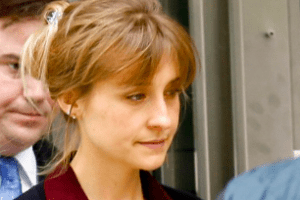 The website Crazy Days and Nights has a blind item about Allison Mack.

Apparently the restrictions imposed on this former A- list mostly television actress from a very hit, long running almost network show now defunct do not state she can’t have sex with people. Apparently she has been using sex to get others to reach out and do things for her that would be impossible in her current situation. The people she has sex with then meet with others our actress wishes to be contacted.       Allison Mack

***
Is this true? If it is, it means Allison may be skirting the bail restriction not to speak with NXIVM members — by having intimate meetings with various individuals who are then used to pass messages on to her NXIVM cohorts.
This reminds me of Judith Exner (January 11, 1934 – September 24, 1999), an American woman who claimed to be the mistress of U.S. President John F. Kennedy and Mafia leaders Sam Giancana and John Roselli.

Reportedly, Kennedy asked her to contact Giancana, and she helped set up a meeting between them prior to the 1960 presidential election. For about 18 months in 1960–1961, Exner claimed she served as the president’s link with the Mob. She crisscrossed the nation carrying envelopes between the president and Giancana and arranged about 10 meetings between the two.  She later claimed these messages concerned plans to assassinate the Cuban president Fidel Castro. Ostensibly, her meetings with both Kennedy and Giancana were sexual.

Now, if there is someone or several people who are [ostensibly] the sexual liaison between Allison and Clare, Nicki Clyne or others, it could spell trouble for one or more of the defectors. It might also spell trouble for Mack.

On the other hand, it may not be true. The source for this Crazy Days and Nights story is not revealed and it could be mere rumor or speculation.