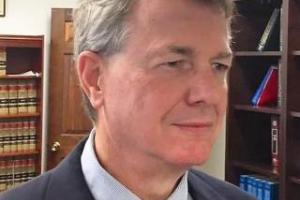 Even though no official paperwork has been filed, several sources in the Albany legal community have confirmed that William Fanciullo – Law Office of William Fanciullo – is no longer representing Kathy Russell, the low-level former bookkeeper for NXIVM who may be being set up to take the fall for many of the financial crimes of Keith Raniere, Nancy Salzman, Clare Bronfman and Karen Unterreiner.

Suspicions first arose when Fanciullo’s name did not appear on the “Stipulation” whereby the prosecution and all the defense attorneys agreed on the rules for the handling of the “collateral” that was provided to Raniere and Allison Mack by all the branded DOS slaves.

Prior to setting up his own law practice, Fanciullo served as an Assistant U.S. Attorney in the Northern District of New York. In addition to his usual caseload duties, he also served as the “Asset Forfeiture Specialist” for that office – which may be the primary reason why he was hired to be part of the phalanx of attorneys who are now representing the six NXIVM-related criminal defendants.

At this point, it is not known who will represent hapless Kathy going forward. Rumor is that the NXIVM leadership may let her be represented by a public defender – which is tantamount to pleading guilty in the federal legal system.

Questions have also arisen about Kathy’s bail. Originally, it appeared that Kathy was going to simply remain in prison until she went to trial because, despite having worked for Executive Success Programs for almost 20 years, she could not come up with the $25,000 bail that the court set for her release (Apparently the court did not give her the option of posting a bail bond – in which case she would have only had to pay a $3,750 fee to get released) .

But, after Kathy had spent a couple nights in jail, Karen Abney – Kathy’s successor as NXIVM’s bookkeeper – showed up to bail her out. And according to the paperwork filed in Kathy’s case –

Karen Abney is the one who posted $25,000 in cash to get Kathy out of the clink.

Numerous sources have indicated that there is little likelihood that Karen Abney had $25,000 of her own money to post as Kathy’s bail (Like all ESP devotees, she never earned much above the minimum wage while working for the cult.) This may lead the Feds to have a little discussion with Karen about the real source of the $25,000. Should that happen, she’ll hopefully be smart enough to tell them the truth – and thereby avoid a 5-year sentence for lying to a federal officer.

The question surrounding the origin of the $25,000 that Karen Abney used to post Kathy’s bail is similar to the question of who is paying for all the lawyers who are representing the six NXIVM-related defendants in this ever-broadening case. And we’ll be exploring that question in more detail – and some of the related legal implications – in a future post.

Another question that has been raised is why NXIVM had Kathy Russell’s successor be the one to post her bail. Given that Karen Abney likely engaged in the same type of criminal activities that Kathy is accused of doing, she seems like an odd choice to step up to the plate on behalf of Kathy.

Some have suggested that they see the invisible hand of Karen Unterreiner behind all this. As is well-known throughout the NXIVM community, this long-time partner of Keith Raniere was the real “brains” behind most of NXIVM’s financial crimes – and likely was the one issuing directives to Kathy and Karen in their role as NXIVM’s bookkeeper. But, so far, the Feds haven’t come for her.

Vanessa Grigoriadis goes on NPR and DOES NOT defend Raniere; not really
Where’s Waldo? And why is he walking around so much?