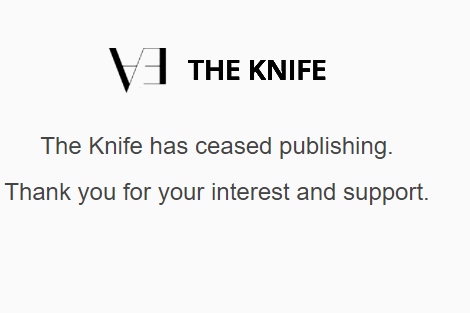 The home page has little to say. The once highly vaunted Knife Media [formerly The Knife of Aristotle] is dead.

On the home page, all we find is this:

The Knife has ceased publishing.

Thank you for your interest and support.

The brainchild of Keith Alan Raniere, known to his followers as The Vanguard, the Knife Media was designed to give its paid  subscribers an unbiased analysis of the news reported by the major news outlets as analyzed by NXIVM members.

Under her (I don’t mean it that way!) was writer Jens Eric Gould as Editor-in-Chief.  Actress Nicki Clyne was the Producer.

Another cast of about 20 NXIVM members were spin specialists and senior analysts.

Last week, I reported that Rosa Laura’s name came off the masthead. I suspect she is readying herself for an indictment for her role in the sex trafficking and financial crimes of NXIVM.

Of course, it is possible she acceded to her ailing father’s wishes that she leave the vicious cult and is now aiding the prosecution.  Rosa Laura is an heiress in her own right – but her father, wroth about her involvement in the criminal cult, cut off her million dollar per year allowance last year. Lack of funds might be another reason that the 10-12 remaining NXIVM/Knife spin analysts were furloughed (Last time I checked, I didn’t see any provision in Clare Bronfman’s bail package that would allow her to keep funding this operation)

While it was in operation, the Knife Media consistently failed to disclose its relationship to NXIVM – and Keith Raniere – even prior to his arrest in March.

Its Twitter thread featured NXIVM members declaring how great the Knife Media is and why everyone should pay to subscribe.

I have written about the Knife in the past. Now, it’s and just like all things associated with Raniere, it will not be missed or remembered.

Here are links to a few of the articles I wrote about the Knife:

Jens Gould, as editor of The Knife Media, [Formerly Knife of Aristotle] gives interview on Fox

Frank Report challenges ‘The Knife” to use their proprietary method to analyze and rate ‘fake news’ level of Times Union series on Raniere and NXIVM!

Did DOS blunt the Knife of Aristotle?

Knife of Aristotle losing its edge?

Where’s Waldo? And why is he walking around so much?
Ben Szemkus is alive and well and living on Twitter
Comment