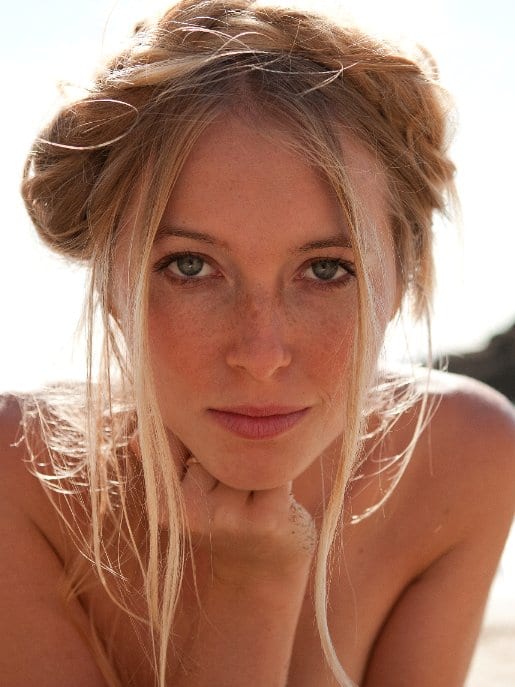 India Oxenberg has left NXIVM and is living in the Los Angeles area with her mother, Catherine. She also has a boyfriend – who had a role in her leaving NXIVM.

India was a branded DOS slave – and her slave master, and grandmaster, Allison Mack and Keith Raniere respectively, are forbidden to contact her. Raniere is in federal custody,. Mack is on home arrest in Los Alamitas, California – as part of her $5 million bail package.

After Raniere and Mack’s arrest, for a time, India was getting orders from Clare Bronfman or through Nicki Clyne. With Bronfman’s arrest, another portion of the invidious operation fell to pieces. Bronfman is forbidden contact with India as part of the terms of her $100 million bail package.

Clare’s incredible cheapness helped seal the deal for India’s escape.  While Clare was springing for $40,000 per month digs for Raniere and her [and other DOS slaves] to live in luxury – she gave no money to India.

India was forced to take a job at Plantmade in NYC – a vegan eatery.  There she began to work and see non-cult human beings. They took her in as friend and co worker and she was a great worker by all reports. A superstar at Plantmade.

They also helped deprogram her. She told co workers about Keith and as she described the ugly creature – they expressed their horror and this too must have helped the young lady. Seeing Raniere through their eyes – as she described what he did to her – had to help a little.

She also read the Frank Report- as did many of those who worked at Plantmade – some of whom contacted me and gave me regular reports. She told them that the Frank Report [and I] was reprehensible and I wrote lies about Keith.

Her mother Catherine revealed part of the story on NBC  – admitting her child was home. That finally the winsome young actress, model, businesswoman and chef has seen daylight – after a long interval of darkness.

I think India was persuaded to leave the cult- and quit her NYC job at Plantmade – because of series of events:

Of all the influences, perhaps it was love – her boyfriend – who had the best influence.  Patrick said he would not tolerate his girlfriend taking orders from Raniere and being in a sex cult.

So yes, India is out. Her boyfriend would not stand for it.

I’ve known about it for weeks – and was told by sources other than Catherine. Out of respect for her, I have withheld the information. Catherine revealed it today herself – so I am free to report the glad tidings.

Catherine’s book “Captive” is out today also. It was sent to the printer before India left. The next edition should provide the epilogue – India left the cult – and Catherine was successful. Her daughter is no longer captive.

On top of that — the cult is almost dead.

Still it was not Catherine alone who took down the cult.

It took a team effort – that included Catherine, Toni Natalie, Joe O’Hara, Susan Dones, Barbara Bouchey, Mark Vicente, Bonnie Piesse, Sarah Edmondson, Anthony Ames, the DOS slaves who spoke to the FBI, a certain lawyer who helped facilitate much of the witness protection, cult buster Rick Ross, lawyers like Peter Skolnik and many, many others – including the media – like Barry Meier of the NY Times, Brendan Lyons of the Albany Times Union and James Odato, Suzanna Andrews and blogger John Tighe and many, many others who defected and helped in various ways — and of course the FBI and DOJ EDNY.

As far as India being a further victim of the cult via the DOJ – India was the individual who in the original complaint against Keith Raniere was listed as co conspirator #2 . This inclined some to believe that she would be charged if she did not cooperate with the DOJ.  Suffice it to say that India will not be charged and you can draw your own conclusions as to why.

Meantime, India and Patrick have a lot in common – and out of respect for their privacy I will not reveal his name or his occupation.

Her stepfather Casper told me that Catherine [and I] publicizing India’s role in the sex slaver cult was worse than her actually being in it and being branded. I disagree. Regardless, the news is out – India was in a cult. Now she’s out.

She came out on her own volition.  She can have a great future by helping/preventing others from this same kind of horror.

I know India has disdain for my ‘Tabloid” [the Frank Report.] One day perhaps she will see it was a force for good – and that its rough and sometimes savage nature was meant as tough love and an alarm bell to wake up sleepy people.

I’m glad she was one of those who woke up.

For my own part, I admire India – even when she was in NXIVM – for she stuck to her principles. She was transparent. I liked that she did not take Facebook comments down when hundreds were criticizing her publicly – and the other little scaredy pants members hurried to take down their posts.

When she was with Raniere/Mack, she was devoted and kind of fearless. Now that she is not with them – I wonder if she won’t be just as forceful against them.

Today, India has the opportunity to do something to insure the Bronfman-Raneire crime organization is finished for good and help other women and men from getting ensnared in other like organizations  – to help others not become captive.