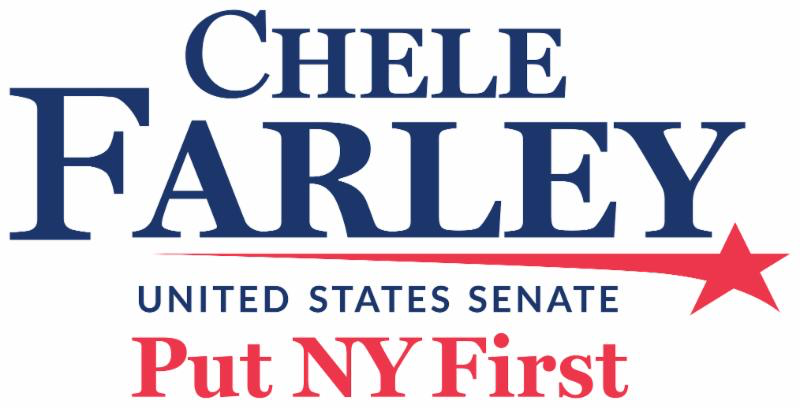 New York, New York – U.S. Senate candidate Chele Farley (R, C, Reform) today blasted her opponent Kirsten Gillibrand for failing to stand up for New York homeowners in tax reform negotiations, which has negatively impacted residents of high-tax Westchester County, in particular. Farley pledged, if elected, to fight for an increase on the cap on deductions for state and local taxes (SALT).

According to a report today in Bloomberg News, home purchases in Westchester County plummeted 18 percent in the second quarter of 2018 as the impact of the capped SALT deduction was considered by home buyers.

“Kirsten Gillibrand’s failure to stay at the table and fight for New Yorkers during the tax-reform negotiations is being felt today in communities around the state but particularly in high-tax areas such as Westchester County,” said Farley.

She continued, “I negotiate for a living. When I am Senator, I will not quit, I will not give up, I will not stop fighting to increase the SALT cap for hard working New Yorkers who are taxed enough already.”

SALT has forced significant price reductions and increased inventory in the Westchester market, trapping owners in their homes. Worse, the impact of the SALT change was exacerbated by a recent increase in property taxes by Westchester County.

“Kirsten Gillibrand has been on every side of every issue and the only thing she fights for is to promote her candidacy for President in 2020. New Yorkers need a representative in Washington who puts them first and has more than Jell-O for a backbone,” said Farley.

Throughout her campaign for U.S. Senate, Farley has been a vocal advocate for reversing New York’s balance-of-payments deficit with Washington. New Yorkers send $48 billion more to Washington every year than is returned to the state. Farley who pledges to raise the SALT cap, has also sought tax equity for renters. Last week, Farley rolled out her “Renter Fairness, Affordability and Opportunity Plan,” which would provide an itemized deduction on monthly rent for those filing federal tax returns.

The federal tax deduction would be capped at $3,000 per month and $36,000 annually on renter-occupied units, including apartments and single-family houses.

Yesterday, on Fox Business’ “Varney & Co.,” Farley said, “Why is it that only homeowners are allowed to deduct their mortgage and their property taxes? It’s not fair—it’s not equitable.”

Concluded Farley, “New Yorkers pay the highest taxes in America and whether an owner or a renter, they need relief.”

Chele Farley is an outsider with over 25 years of experience in the private sector. She is the Republican, Conservative and Reform Party candidate for U.S. Senate. Farley lives in New York City with her husband Richard and their three sons. For more information about U.S. Senate candidate Chele Farley, please visit www.CheleFarleyforSenate.com.

#TheList: Developed countries that give “birthright” citizenship
Is Trump Emerging as “the Grown-Up in the Room”?