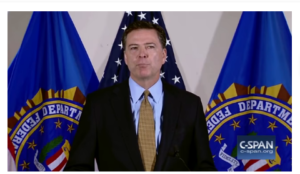 ‘[The DOJ] is ORDERED to take all necessary and reasonable steps to ensure that any records that are potentially responsive to either of the Plaintiffs’ FOIA requests located on former Director Comey’s personal e-mail account are preserved.’

‘[T]he Court will allow [the DOJ] until September 28, 2018 to complete its review and release of any responsive, non-exempt records to Plaintiffs.’

(Washington, DC) – Judicial Watch announced today that a federal court ordered the Department of Justice to preserve federal records located in the personal email accounts of fired FBI Director James Comey. Judicial Watch and Daily Caller News Foundation (DCNF) had filed a motion asking the court to issue an order for preservation that was opposed by the Justice Department and FBI.

In the motion, Judicial Watch argued that “there is reason to be concerned that the responsive records could be lost or destroyed.” Judicial Watch pointed out that in June 2018, the DOJ’s Inspector General stated, “We identified numerous instances in which Comey used a personal email account (a Gmail account) to conduct FBI business.” The Justice Department, in response to Judicial Watch’s concerns, sent Mr. Comey a letter asking him to preserve records but refused to make the letter available and opposed a preservation order.

In granting the motion for a preservation order, the court ruled:

In order to avoid any possible issues later in this litigation, the Court will GRANT [Judicial Watch’s] Motion. [The DOJ] is ORDERED to take all necessary and reasonable steps to ensure that any records that are potentially responsive to either of the Plaintiffs’ FOIA requests located on former Director Comey’s personal e-mail account are preserved. Although it contends that such an order is unnecessary, [the DOJ] has not explained why this preservation order would prejudice Defendant or cause any undue burden.

The court also explained that its order did necessarily mean the court believed that Mr. Comey either had government records or that they would be lost or destroyed.

The filing comes in an April 2018 Freedom of Information Act (FOIA) lawsuit filed after the DOJ failed to respond to Judicial Watch’s May 2018 request and DCNF’s February 2018 request (Judicial Watch and The Daily Caller News Foundation v. U.S. Department of Justice (No. 1:18-cv-00967)). The lawsuit is seeking: