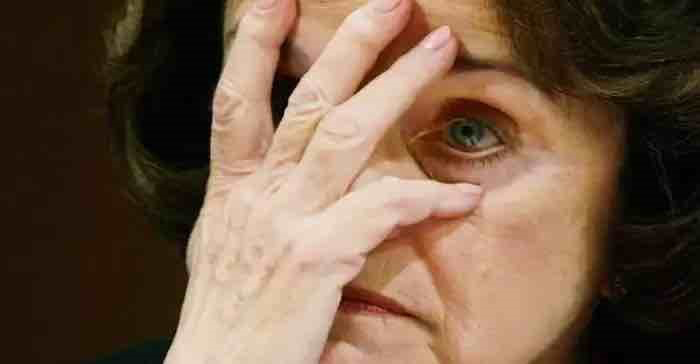 There was no collusion between her and China via the PRC spy on her staff. And no Special Counsel is needed to investigate this. Nothing to see here, folks. Move along now.

The first cousin of Fake News is Ignored News.
Ignored News happens when the liberal media suppresses—in part or in full—a story that’s unfavorable to a Democrat politician, political operative, or politically active celebrity in the entertainment, educational or business venues.

Ignored News has no competition because it’s, well, largely ignored. Or, if it’s distributed, it’s only “up” for a short time on a secondary news platform.
Some Ignored News concerning Senator Dianne Feinstein (DiFi) briefly surfaced on an obscure media source:
“Hankoryeh, a South Korean news publication, described [Russell] Lowe in October 2017 as ‘a Chinese-American who spent 20 years as the aide to Dianne Feinstein.’ Lowe visited the publication’s Seoul office at that time with former Democratic California Rep. Mike Honda, who left office in January 2017 after losing to progressive challenger Ro Khanna in 2016. Feinstein reportedly ‘found out’ that her staffer was a Chinese spy in 2013—while she was the Chairman of the Senate Intelligence Committee.”

So, five years ago, U.S. Democrat Senator Dianne Feinstein discovered her employee, Russell Lowe, was spying for the Peoples Republic of China (PRC).

In the screen shot below, Russell Lowe stands to your left.

It’s not every day that a foreign spy is discovered working for a senior U.S. Government official—especially one with access to many of the nation’s secrets.

So how come this isn’t BIG NEWS?

Below is a composite photo of DiFi and Russell, identified as her “Office Director.”

Concerning Russell’s role as an “Office Director,” in The Daily Caller we learn that:

Lowe worked for 20 years in Feinstein’s San Francisco office, where he was a staff liaison to the Asian-American community before leaving approximately five years ago. All those details match up with the descriptions of the Chinese spy Feinstein reportedly employed.

‘Chinese intelligence once recruited a staff member at a California office of U.S. Senator Dianne Feinstein, and the source reported back to China about local politics,’ Politico Magazine reported on July 27, describing the staffer as ‘a liaison to the local Chinese community’ who was secretly ‘reporting back’ to Chinese intelligence services.

All of those details point to Lowe, who was listed on Feinstein’s payroll as an ‘office director’ in 2013, according to records maintained by the Sunlight Foundation.”

To see a profile of some of the duties Lowe performed for DiFi, there’s a partial list of his activities here. They including: assisted with voter registration; received government material for DiFi from the Department of Defense housing; consultant to an Association of Chinese Teachers; described as a DiFi aide when a featured speaker at a Conference for the Global Alliance for Preserving the History of World War II in Asia.

Among the same litany of duties in the tweets above, in 2014—after he was outed as a spy in DiFi’s office—Lowe was described as a former DiFi “Assistant” on a panel discussing Chinese Investments in California. Also, he is described as a “trained engineer, photojournalist, community organizer, and staff aide to” DiFi. The list goes on, but you get the drift. He was much more than a “driver.”
Then along comes a San Francisco Chronicle reporter—playing the role of hometown referee—with a defense of DiFi under this headline on August 8, 2018: “Feinstein doesn’t let Trump get best of her over driver linked to spying.”

“President Trump used a weekend rally to mock U.S. Sen. Dianne Feinstein over the Russia meddling probe by calling out her former driver, who we reported had been linked to Chinese spying.
‘Speaking of China, it just came out that the Democratic leader and the leader of the Russian investigation, Dianne Feinstein, had a Chinese spy as her driver for 20 years!’ Trump told a crowd in Ohio on Saturday.

Trump later tweeted: ‘Will she now investigate herself?’
{snip}
There was no evidence the driver divulged any secret information [claims the Chronicle on behalf of DiFi] or even knew the Chinese government was trying to recruit him.”

Chinese spy mysteriously appeared on the scene in 1993 just ONE YEAR after Feinstein was elected to the Senate in 1992.”

Right. So, he was unaware that he was spying for China and was just a simple chauffeur driving DiFi to appointments and events while she was in the San Francisco area servicing her constituents, like all good pols must do.

But, then, there’s an interesting back story in that above-mentioned obscure media source:
“Dianne Feinstein and her 3rd husband Richard Blum whom she married in 1980 made MILLIONS off of their financial interests in China. Richard Blum made millions of dollars off of his Chinese investments—his investments in China flourished after his wife, Dianne Feinstein became a US Senator in 1992.

Feinstein traveled to China several times with her husband and even bragged to an LA Times reporter about being the first foreigner to visit mass murderer, Mao Tse-tung’s old residence where he died.
The Chinese spy mysteriously appeared on the scene in 1993 just ONE YEAR after Feinstein was elected to the Senate in 1992.”

Of course, Russell’s appearance was just a coincidence.

There was no collusion between her and China via the PRC spy on her staff.

And no Special Counsel is needed to investigate this.

Nothing to see here, folks. Move along now.

Lee Cary — Bio and Archives |
Since November 2007, Lee Cary has written hundreds of articles for several websites including the American Thinker, and Breitbart’s Big Journalism and Big Government (as “Archy Cary”).  His work has been quoted on national television (Sean Hannity) and on nationally syndicated radio (Rush Limbaugh, Mark Levin).  He is quoted in Jerome Corsi’s book “The Obama Nation,” in Mark Levin’s “Liberty and Tyranny.”  His pieces have posted on the Drudge Report and on the website Real Clear Politics.  Cary holds a B.S. in Economics from Northern Illinois University, and a Masters and a Doctorate in Theology from the Methodist seminary at Northwestern University in Evanston, IL.  He served in Vietnam with the U.S. Army in Military Intelligence. Cary lives in Texas.

Click here to post a comment
Part 2: Debating Raniere’s motion to seal: If granted – and if I find out who’s posting bail through sources – I will publish their names!
Kristin Kreuk interested in ‘Smallville’ animated revival – but don’t count on Allison Mack