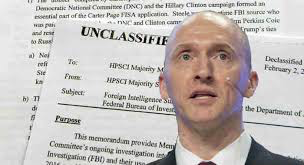 With the release of 19 highly redacted pages from the Carter Page FISA warrant, there is one thing that is CRUCIAL, indisputable, and what we suspected all along. James Comey, Peter Strzok, Rod Rosenstein, and every other DOJ employee who signed off on the FISA warrant and renewals, withheld vital evidence from the FISA court and did it intentionally, with malice aforethought, period!

In my opinion, as a participant in several Title 3 wiretap applications and as an affiant in all, I can state with confidence that no Federal Judge, FISA or Title 3, would issue a wiretap warrant on CARTER PAGE, A U.S. CITIZEN, if they were aware of the withheld evidence.

ASK ANY FEDERAL JUDGE FOR HIS PERSONAL OPINION!

I don’t know who Peter Strzok thinks he’s fooling, but he isn’t fooling anyone who is or was involved in any criminal federal investigations where search and seizure warrants were obtained. The rules, regulations, and laws are crystal clear: the agents and prosecutors,  ALL know that to violate any is “certain death” to a career and probably would result in total bankruptcy in attorney fees. They won’t go along with what Strzok, Rosenstein, Comey and the others perpetrated because they believed Clinton was a shoe-in.

What this all means is this: President Trump must suspend any DOJ employees who signed off on the warrants and swore that the information was true and accurate.

He must order that Criminal investigations be opened, by the FBI, on all those involved.

He must order that all the investigations and “MATTERS” that were touched by the same Agents be reopened and aggressively pursued.

He must suspend and close, by direct orders, the Mueller investigation, which was initiated by the same players and same Dossiers immediately;  all charges that were filed by the “mule team” be dismissed with prejudice, as fruits of the poison tree. There is no need for the President to wait for those whose rights were violated by corruption to be put through the rigors of the court system.

Also, he should order that the charges be dismissed by pardons if necessary.

All that we said, wrote about and believed as well as what President Trump has been saying are turning out to be true, and substantiated by the smelly FISA documents. The President is doing his job and correcting many wrongs by taking charge and ordering that the DOJ “train” that has been derailed be put back on track. He is draining the swamp.

A Mexican view: Emiliano – not Raniere was leader of NXIVM – in Mexico at least
If I could change the world…