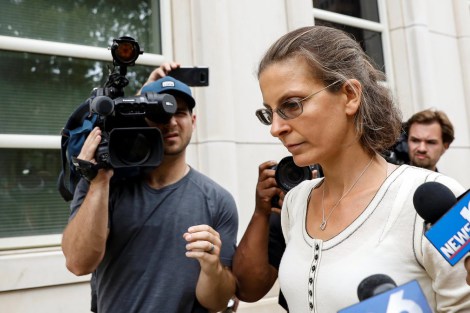 A new story by Barry Meier – on Clare Bronfman – The Journey of the ‘Sex Cult’ Heiress: From Reluctant Recruit to Criminal Defendant  was published today in the New York Times.

Readers of Frank Report may not find much new in the story – but most, I think, will be delighted by the way Barry lays down his story about the heiress who destroyed the lives of many – and now very likely destroyed herself – by following The Vanguard.

While the Frank Report first broke the DOS branding story in June 2017, Barry Meier was the first mainstream media reporter to write about it – in October 2017. His story Inside a Secretive Group Where Women Are Branded –  created a media sensation and prompted the US Attorney’s Office for the Eastern District of New York to begin its investigation into Bronfman-Raniere.

In his latest story, Meier gives readers an intriguing glimpse into what likely happened to Clare Bronfman and her descent into depravity.

Although I know the Clare Bronfman story fairly well, I learned about one new vignette – a rather repulsive one – from the story:

“In the summer of 2013, with his health failing, the billionaire businessman Edgar M. Bronfman was visited at home by his youngest daughter, Clare. She brought with her a production crew that was making a film about a self-help group called Nxivm.

“Mr. Bronfman, the former chairman of Seagram Company, had long clashed with Clare and her sister Sara over their lavish financial support of the group. A decade earlier, they had given $65 million of his liquor fortune to its leader, Keith Raniere — money that he promptly lost in the commodities market. …  Forbes published a critical article about Mr. Raniere in which Mr. Bronfman described Nxivm as a “cult.”

“But Clare Bronfman had not come on that day in 2013 to make peace with her father, who died later that year. Instead, she pressed him to admit on camera that he had been wrong to criticize Mr. Raniere, said a former Nxivm official who was present at the meeting.

“‘He was very sick,’ said the official, Mark Vicente. ‘He appeared to be very saddened by her questioning.’”

That vignette in the Times article sums up Clare in a nutshell. Her father had only months to live. It is said he was despondent on his very death bed about his daughter’s involvement in this cult.

Shortly before he died – instead of going to see him in love and with honor  – she comes with a camera to elicit, to pressure a confession out of a weak and dying old man – for Raniere’s benefit – trying to get her father to say on camera that he was  wrong about Raniere.

I wonder if Clare confessed to her father that she hacked into his computer – for Raniere.  [Clare was indicted last month. Although it does not say it in the indictment – her lawyer, Susan Necheles, admitted in a bail memo – that among Clare’s alleged criminal acts was hacking into her father’s computer.]

On December 14, 2017 – four years after her father died – and before Keith was arrested, Clare made a statement on her website defending Keith [who was then experiencing a fair amount of adverse publicity at the time.]  She mentions how Keith helped her cope with her father’s death.

She wrote, Keith Raniere “is a dear friend who has and continues to help me through the difficult decisions and painful moments in my life, including my father’s illness and eventual death.”

The hypocrisy is stunning. Keith ruined her relationship with her father, plundered her inheritance from him, got her to spy on him, caused him heartbreak on his deathbed, and much, much worriment over the years, and she gives Keith – who caused all this – credit for helping her cope with her father’s death.

This is in microcosm what a cult is and what it does.