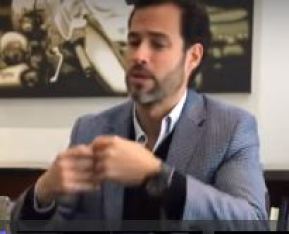 The Mexican news site Indice Politico has a series on Emiliano Salinas – and it isn’t pretty.

1 Emiliano has a private security company – which is licensed to provide heavy weapons.

2 Emiliano apparently had a metldown at one time or another and was admitted to a mental health facility.

Do you want a weapon? Emiliano Salinas will rent it to you

The behind-the-scenes activities of Emiliano Salinas Occelli are endless. What is known so far of his links with the NXIVM cult , financial business, tax returns – about which there are many complaints …. [is] just the tip of a huge iceberg.

What is known is Emiliano has entered the private security business, through the company Seicsa , whose franchise he acquired with businessman…Mariano Ojeda .

The curious thing is that Seicsa is one of few companies in the industry that has permission from the Ministry of National Defense for its employees to use weapons in the security services and escorts that it offers.

More curious is that, if you decide to rent one of those weapons, you can go to Salinas Occelli and/or Ojeda to rent the one you like. The rates are not modest.

The matter is not minor. Much less when the supervision of the Sedena is involved.

And it is dangerous, if it is remembered that Emiliano was admitted in La Carlota de Montemorelos, Nuevo León, to be treated for various psychological and emotional problems. It is not known what his reaction might be if he had rented a gun himself. or, why not?–  a submachine gun.