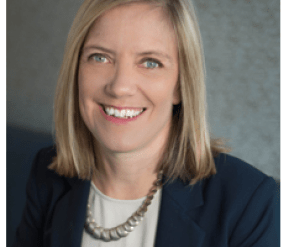 NXIVM fall gal, Kathy Russell has a new attorney. Her old one, William Fanciullo, of Albany, dropped out for reasons that are unclear. Her new attorney is Justine Harris with offices in New York City.

Kathy Russell, who long ago was designated by Vanguard to take the fall in case the government ever came calling, is, according to sources, completely convinced that if she stands by her Vanguard, she will be acquitted – as will her master.

According to one source, she considers the charges almost a joke – but she is proud also to endure pain for her wondrous teacher, Vanguard, known also in court documents as Keith Alan Raniere, 57.

Kathy is presently free on bail and forbidden to work for NXIVM as its double-sets-of-books bookkeeper.

Her new attorney, Justine Harris – according to her website is  a partner in the law firm of Sher Tremonte with 20 years experience.

“Ms. Harris represents individuals and companies in a wide variety of criminal and white-collar matters, as well as complex civil and regulatory proceedings. … Ms. Harris has obtained numerous jury acquittals, won pretrial motions to dismiss, and consistently achieved favorable sentencing outcomes for her clients. Many of Ms. Harris’s clients have had their charges reduced, or have avoided criminal or civil liability altogether. Super Lawyers has recognized Ms. Harris as one of Manhattan’s top white collar criminal defense attorneys and listed her among the Top 50 Women in 2017.

What this means is that Ms. Harris likely ‘don’t come cheap.’  But who is paying for it?

Kathy – despite 20 years with Executive Success Programs – is broke [of course]- as former attorney Fanciullo revealed when he successfully sought a reduced bail bond from $50,000 to $25,000.

That bail bond was paid in cash by fellow NXIVM bookkeeper Karen Abney, who likely was not using her own money.

As for paying the new attorney’s fees, sources tell me that Sara Bronfman-Igtet and Clare Bronfman set up a substantial fund to defend Kathy Russell and others. It is not known if Kathy’s defense and its financing are contingent on doing what is best for other co-defendants such as Keith Alan Raniere or Clare Bronfman – first and foremost.

Of course, if one were to ask Justine Harris – I suspect that she would say she represents Kathy first and only — and I would suspect she would be telling the truth.

But there are ways to get around ethics – and the Bronfmans – as followers of that foremost of ethicists – are not strangers to such surreptitious devices.

What we don’t know is whether, prior to her retainer/engagement, Ms. Harris was informed that her future client, Kathy Russell, would not be interested in taking any plea deal that requires her to testify against her co-defendants.  This might appear as Kathy’s instructions.

What she would likely be told by Kathy or one of Clare Bronfman’s representatives [for the trust that pays the lawyers] is that Kathy is a highly principled, ethical person who believes in her innocence and only wants a lawyer who will not push to seek a plea deal in exchange for providing testimony adverse to Bronfman-Raniere.

In this scenario, Kathy could be set up to take a fall, while her attorney thinks she has a principled client – that she can bill right through trial – who has a trust with the ability to pay – without the conflict becoming evident.

Since Kathy, like all NXIVM members, will likely lie about evidence to her attorney, Harris might even think Kathy is innocent of the charges and she can prevail at trial.

The weakness in this alleged Bronfman-Raniere scheme is that, should Kathy wake up one day and decide to save herself – there is nothing the trust that pays her legal fees can do to compel an honest attorney not to follow Kathy’s instructions. If Kathy wants to flip and get a plea deal – Harris has to work for that – despite what the people who paid for her services want as an outcome.

According to her website, “from 2001 to 2010, Ms. Harris was an assistant federal defender at the Federal Defenders’ office for the Eastern District of New York, where she was lead counsel on hundreds of criminal cases in federal court.”

This means she is intimately familiar with the federal system in NYC/Brooklyn and knows the local rules and all the players. She probably has personally arranged for hundreds of plea deals, arranged for some dismissals, took some to trial, won some, lost some and maybe she will be able to help Kathy get out of the entanglement of NXIVM and avoid jail.

But first, Kathy will have to want to help herself.  At of right now, this does not seem to be the case. According to sources, Kathy plans to stand with her Vanguard and go to trial alongside him.

Click here to post a comment
Kristin Kreuk with Allison Mack were recruiting college students for NXIVM – and little girls too
Allison Mack asks judge to let her work, volunteer, go to school and church; motion likely to be granted