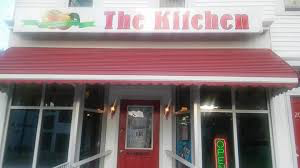 We like to visit different restaurants whenever we can. It is a bonus if it is a cuisine we haven’t had in a while. The Kitchen filled the bill on both counts. They call themselves “Upstate Southern Food and Desserts.” I haven’t been to many other soul food restaurants, not by choice but there are just so dang few of them. We would drive past this place every time we went down Washburn Street, usually on our way to another eatery, but we had never managed to stop there for dinner.

The restaurant is in an old building that used to be the Washburn Street Meat Market for as long as I could remember. When they closed I thought it would become just another vacant building. Thankfully I was wrong. This is an excellent addition to Lockport.

It is primarily a takeout place so I called in our order and was informed they didn’t have either the frog legs I wanted (8.50) or the fried oysters my wife craved (8.00). They said they run out of seafood early in the week and they would get a fresh delivery on Friday. I said I would call back and hung up. My wife and I made different selections and I called them back. I ordered the catfish with greens and rice with red beans (12.00). They informed me they were out of greens. Damn, I just couldn’t get a break. I asked them if they had the Jalapeno Mack and Cheese and they assured me that they did. My wife ordered the sweet and spicy wings (8.00).

We drove over and parked in the street in front of the place. I appreciated that they had a railing from the sidewalk to the front door. When we entered I noticed that they had kept the bones of the market giving it a fresh coat of paint and adding quite a few personal touches.

The white, bead board walls were covered with memes, and menus. The wiring was old school surface mount type wiring with western union splicing on the ceiling. I loved it.

Our order wasn’t quite ready so we sat on some bar stools at the front counter. There was a young couple seated at the only table there and their order arrived while we were waiting. Everything is served in Styrofoam take out containers with plastic silverware. As they opened up their meal, the smells made me start salivating. Pavlov would have been proud.

We started chatting with them and they told us they have been coming to The Kitchen since it opened and said they have yet to have a bad meal. The gentleman offered that the mac and cheese is the best he ever had.

When our order arrived, it weighed a ton. Ok, not quite a ton but we had a few pounds of food. I paid our $20.00 and we left. We got home and opened the Styrofoam and OMG, there was a lot of food. Donna’s wings looked like a 5 napkin meal. There was plenty of sauce on them.

I opened my meal and it was so filled that some of it spilled out on the table. What concerned me was the way it looked. The catfish was thin, and looked overcooked. My rice looked plain like it needed some butter and salt or something. The mac and cheese looked creamy but looked a bit light on the peppers.

Time to chow down. First off Donna’s wings were delicious. The wings were moist, tender and flavorful. I only had two of them but I required two napkins. Not the type of meal you would have on a first date.

Then I started on my dinner. My rice was awesome. I was going to douse it with one of the many varieties of hot sauce we have, we must have 8-10 different types, but I’m glad I didn’t. The rice didn’t need a thing, not even salt.  It seemed to have a sweet taste that I don’t usually associate with rice. On to the mac and cheese. It had just the perfect amount of Jalapenos in it. If there were more it would have been too spicy for my palate, any less and it would have needed hot sauce.

Next up, the catfish. What looked like 2 overcooked pieces of fish were delightfully moist and tender. One nice thing about this catfish was I could pick it up, fold it in half and eat it like a taco. It was spiced perfectly and didn’t require tartar sauce or any other condiments. I didn’t even have to salt it. This was without a doubt the best catfish I have ever had. Like they say don’t judge a book by it’s cover. The Kitchen may not be big on looks but they have the food part down pat.

I give them 8 out of 10 spoons but only because they were out of the food we first wanted.

How to Talk with Social Security about Enrolling in Medicare
GREAT LAKE SWIMMERS NEW ALBUM ‘THE WAVES, THE WAKE’ TO BE RELEASED AUGUST 17TH