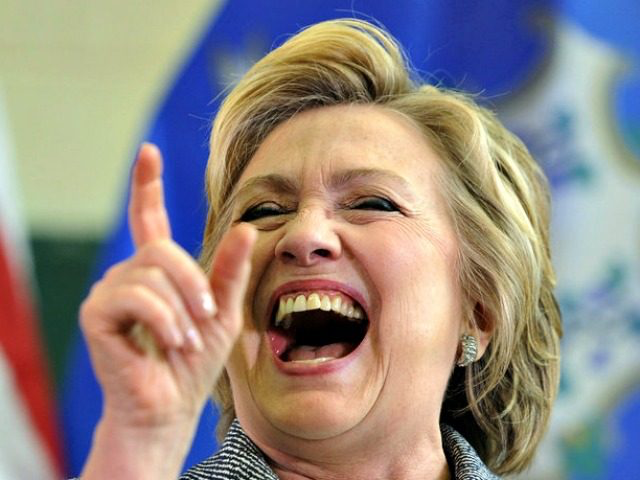 Do you think we’ve heard the end of Hillary Clinton’s email escapades? Don’t count on it.

We have now released two batches, 184 pages and 45 pages, of newly uncovered emails that were sent and received over Clinton’s unsecure, non-“state.gov” email system. Five of them contain classified information.

The documents are part of the accelerated schedule of production ordered by U.S. District Court Judge James E. Boasberg, which requires the State Department to complete processing by September 28, 2018. The remaining documents are part of the 72,000 pages recovered by the FBI in its investigation into Hillary Clinton’s illicit email server. These new classified and other emails appear to be among those that Clinton had attempted to delete or had otherwise failed to disclose.

The new documents include material classified “confidential” on negotiations between Northern Ireland and UK, as well as negotiations with Israel, Palestine, and France. They also include a reference to a Clinton meeting with controversial leftwing billionaire George Soros, and advice to Clinton from Sid Blumenthal, who was barred from a State Department position by the Obama administration and regardless continued to advise her on matters of state.

All of this suggests to me the necessity for the State Department to assert itself and take the lead in developing relations with the new government.

(To read all press releases related to this Clinton email case click here.)

Another Body Blow to Mueller’s Credibility

Some of these characters in the slow-motin putsch against Donald Trump seem to come straight out of a dime store spy novel. One such is Peter Strzok.

His getting fired is another body blow to the credibility of the Mueller special counsel operation. Strzok, who hated President Trump, compromised both the Clinton and Trump investigations that saw Hillary Clinton protected and Donald Trump illicitly targeted. Strzok’s anti-Trump texts show the Russia investigation he helped invent with Clinton campaign operatives is irredeemably compromised. As Mueller’s operation is founded on Strzok’s corrupt activities, it must be shut down.

(Strzok was reportedly removed from the Mueller investigative team in August 2017 and reassigned to a human resources position after it was discovered that he and Page, who worked for then-Deputy FBI Director Andrew McCabe, exchanged pro-Clinton and anti-Trump text messages.)

We recently uncovered documents showing that Strzok insisted on retaining his FBI security clearance before moving to the Mueller team and confirmed that Strzok played a pivotal role in the flawed Hillary Clinton email investigation. And, previously releasedrecords from the DOJ to Judicial Watch reveal Strzok’s and Page’s profanity-laced disdain for FBI hierarchy and policies.

Strzok oversaw the FBI’s interviews of former National Security Adviser General Michael Flynn. He changed former FBI Director James Comey’s language about Hillary Clinton’s actions regarding her illicit email server from “grossly negligent” to “extremely careless.” He also played a lead role in the FBI’s interview of Clinton and is suspected of being responsible for using the unverified dossier to obtain a FISA warrant in order to spy on President Trump’s team. How did a character with ethical flaws like this rise so high in the FBI?

Strzok’s firing won’t stop Judicial Watch – we are suing for the emails and text messagesbetween Strzok and former FBI attorney Lisa Page.  Those documents will be dribbled out to us by Strzok’s protectors in the Deep State, so this Strzok-FBI abuse scandal is far from over.

The open borders crowd would have you believe that the only issue is innocent children separated from their mothers. The reality is far different, as our Corruption Chronicles blog reports.

An ISIS operative jailed in Chicago and mysteriously released after FBI intervention, has surfaced in a minimum security prison about 165 miles south of the Windy City. His name is Emad Karakrah, the ringleader of a sophisticated narco-terror operation, and in 2014 he was arrested after leading police on a high-speed chase through Chicago streets with an ISIS flag waving from his car. When police finally captured Karakrah, he told officers his car was rigged with explosives that would detonate if searched. Bomb disposal units secured the vehicle without incident, but Karakrah’s arrest helped expose a huge narco-terrorist network with roots and financing in El Paso, Texas. Karakrah also lived in New Mexico, the border state where authorities just raided an extremist Muslim compound that trained kids to commit school shootings.Judicial Watch uncovered Karakrah’s terrorism record and has reported extensivelyon his extremist activities, including a 2009 plot to bomb talk-show host Oprah Winfrey’s Chicago studios and the iconic Sears Tower. Judicial Watch also produced an investigative documentary about the narco-terrorist cell that Karakrah and other jihadists—including two of the FBI’s most wanted terrorists (Jaber A. Elbaneh and Adnan Gulshair el Shukrijumah)—operated from El Paso. Karakrah was a logistics and transportation operative for militant Islamists in the United States, according to high-level law enforcement sources. He moved people, weapons, explosives, drugs, money, and other materiel to terrorist cells operating in Chicago, Brooklyn, New York and Saddle Brook, New Jersey, among other locations across the U.S. More than a decade ago Karakrah smuggled drugs and weapons for the renowned Juárez drug cartel in Mexico.

At some point, Karakrah reportedly became a confidential informant for the FBI, but went rogue and broke contact with his bureau handlers. This appears to be the reason that the FBI got involved in his state case, which was veiled in secrecy. Legal proceedings against Karakrah in Chicago were delayed at least twice because of FBI “equities,” sources close to the case confirmed. An FBI agent was present during Karakrah’s proceedings in Cook County Court and the agency facilitated his release in 2015, which was kept from the public record. Judicial Watch followed the case closely and verified that Karakrah was no longer in custody of Cook County Jail. The Illinois Department of Corrections subsequently confirmed in writing that Karakrah was not in custody. Judicial Watch’s efforts to independently ascertain Karakrah’s whereabouts were unsuccessful until recently. Karakrah has surfaced at the Lincoln Correctional Center, a minimum security facility in a town of about 14,000 residents. Karakrah’s Illinois Department of Corrections profile lists his “projected discharge date” as July 13, 2020.

The pending release is frightening considering Karakrah’s disturbing history, criminal record and documented ties to some of the world’s most dangerous jihadists. The collaboration between Mexican drug cartels and Islamic terrorists practiced by Karakrah and his cohorts has become a monstrous national security issue for the U.S. Judicial Watch has exposed a number of the enterprises as part of an ongoing investigation into the critical national security threats along the porous southern border. Among the most distressing is that Islamic terrorists joined forces with the Juárez drug cartel years ago and the partnership has resulted in ISIS operating in a region controlled by the cartel, just a few miles from El Paso in a border area known as “Anapra” in the Mexican state of Chihuahua. Other Mexican drug cartels have smuggled nationals of terrorist countries into the U.S. for years, records uncovered by Judicial Watch show.

In one operation exposed by Judicial Watch, drug cartels smuggled nationals of terrorist countries into a small Texas rural town near El Paso. To elude the Border Patrol, they used remote farm roads to reach stash areas in Acala, a rural crossroads located around 54 miles from El Paso. Judicial Watch also uncovered State Department records confirming that “Arab extremists” are entering the U.S. through Mexico with the assistance of smuggling network “cells.” Among them was Karakrah’s partner, Shukrijumah, the Al Qaeda operative wanted by the FBI. Shukrijumah helped plan several U.S. attacks, including plots to bomb Oprah Winfrey’s studio and detonate nuclear devices in multiple American cities. For years Shukrijumah appeared on the FBI’s most wanted list and, despite being sought by the agency, crossed back and forth into the U.S. from Mexico to meet fellow militant Islamists in Texas. In fact, as one of the world’s most wanted terrorists, Shukrijumah piloted an aircraft into the Cielo Dorado airfield in Anthony, New Mexico.

Just last week Judicial Watch reported that an Arab man living in Mexico smuggled six citizens of Yemen—an Al Qaeda hotbed—into the U.S. through the southern border. The feds say the smuggler, 31-year-old Moayad Heider Mohammad Aldairi, conspired with “others” to sneak the six Yemeni nationals across the Texas border for a fee.

This is where our FBI needs to be focused – instead of trying to illicitly bring down an elected president.

My Letter to Keith Raniere – seeking an interview of him in prison
PROJECT VERITAS: INTRODUCING Veritas Leaks – a New Platform Welcoming Whistleblowers that Offers Anonymity, Collaboration, and Impact
Comment