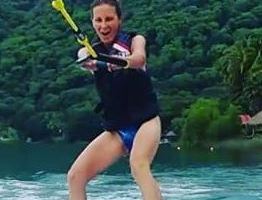 Clare Bronfman’s lawyer, Susan Necheles, said after court yesterday that she disagrees with the judge’s decision to keep her client confined to home detention. She thinks the judge punished Clare more harshly because of her wealth.

Necheles also thinks the judge – Nicholas G. Garaufis – will come around in time.

Necheles told Vanity Fair, “Judge Garaufis said that given the amount of wealth, he wants a little time before he relaxes Ms. Bronfman’s bail restrictions and we should come back to him in two months. We believe that this decision was wrong. It was based solely on Ms. Bronfman’s wealth and failed to consider her actions, such as flying back from Mexico and moving to N.Y.C. so that she can be close to her lawyer and work on her defense. These actions are proof that Ms. Bronfman intends to show up at trial and fight the charges.”

Both the prosecution and Pretrial Supervision opposed allowing Bronfman to wander Manhattan freely because that believe she is a potential flight risk.

In court yesterday, Necheles told the judge the conditions of Clare’s house arrest were too strict.

Judge Garaufis did not agree and chose to continue her house arrest.

He did grant Clare one concession – which prosecutors previously agreed to — Clare can leave her luxury Manhattan apartment for a total of 4.5 hours per week – broken up in three 90 minute intervals – to exercise – go to a gym, jog – or shop etc..

This is in addition to visits to defense attorneys, court appearances, medical appointments, or any other Pretrial Supervision-approved appointments.

Judge Garaufis threatened to send Clare to jail if she didn’t comply with conditions he imposed.

“It’s gonna be my way or she goes to the MDC,” said Judge Garaufis, referring to the women’s section of the Metropolitan Detention Center, a federal jail in Brooklyn – where, ironically enough, Vanguard is housed in the men’s section. Maybe that was Clare’s hope all along.

Bronfman’s lawyer, Susan Necheles, said Clare was getting restless in the apartment, especially since she’s used to “running, jogging, and exercising.”

Judge Garaufis also ruled that Bronfman must stay away from anyone related to NXIVM – with three exceptions – one of whom is her sister, Sara Bronfman-Igtet.

Bronfman, 39, was arrested by the FBI in July and charged with conspiracy to commit identity fraud and racketeering. Bronfman plead not guilty at her arraignment.

She allegedly obtained usernames and passwords of people believed to be NXIVM’s enemies so their emails could be monitored – and she allegedly led efforts to discredit DOS victims by paying for lawyers to file abusive, costly lawsuits meant to intimidate  and silence them.

She is also accused of facilitating a Canadian woman’s fraudulent entry into the United States, and helping Raniere use a dead person’s [the late Pamela Cafritz] credit card.

After the court appearance, Necheles told reporters , “You’ll notice in the indictment there’s only three things she’s alleged to have done wrong. They have nothing to do with NXIVM. We’re confident she’s done nothing criminal.”

Bronfman also had to post a $100 million bond – among the highest sum ever required of a defendant appearing in Brooklyn federal court.  The Frank Report has questioned whether Bronfman was completely forthcoming about her true assets, including whether she disclosed her multi-million interest in Precision Development LLC which owns real estate in Los Angeles.

Bronfman’s lawyer had asked the court that Bronfman be allowed to travel freely in Manhattan up to to 96th Street, between the hours of 6 a.m. and 8 p.m.

Garaufis rejected that request and it is expected that after a few months of good behavior, Bronfman’s attorney will make a second request – if Clare does not land in the hoosegow for lying on her financial affidavit to Pretrial Supervision.

Now for a little artwork and photos of the rebarbative heiress.

Her master. Keith Raniere, AKA Vanguard. and his stooge, Nancy Salzman, AKA Prefect.

Men of NXIVM- How James Del Negro stands tall – but claims he was raped by a short Filipino woman
Men of NXIVM: A reader and I comment on Steve Ose, Ben Meyers and Matt McMorris
Comment