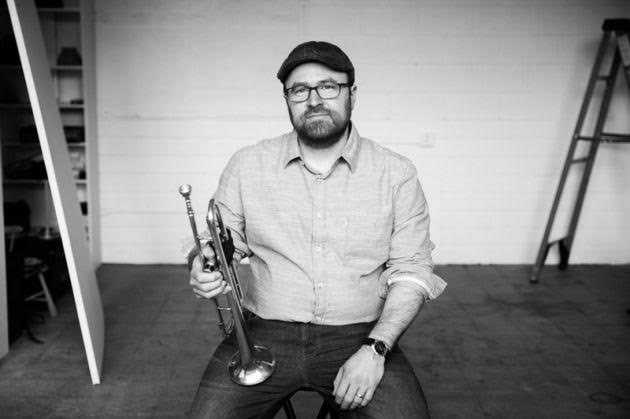 Light and darkness: metaphorically it can stand for hope and despair, enlightenment and ignorance, love and hate. These stark oppositions and impulses, so central to human experience, prove to be fertile ground for the muse of Benje Daneman. Leading a talent-rich group he calls SearchParty, the Kalamazoo-based trumpeter and composer unveils a dramatic six-part suite, with four improvised interludes, titled Light in the Darkness. The project grew out of a 2015 commission from Spark+Echo Arts to explore, in musical terms, the play between light and darkness as expressed in liturgical texts. But Daneman abjures any sectarian intent. “The themes apply to anyone,” the trumpeter explains.

Playing both trumpet and flugelhorn, Daneman wrests a lyricism and grandeur from his written score with the aid of likeminded colleagues, not least his wife, the gifted vocalist Ashley Daneman. “She has a way of incorporating text into improvisation, which I haven’t heard from too many singers,” the leader says. “So I left a lot of improvisatory space for her in the music.” The remaining members are all Chicagoans, beginning with acclaimed alto saxophonist Greg Ward, who brings enormous force and focus to every moment. Of pianist Rob Clearfield, Daneman says: “I don’t know anybody else that does what he does, especially solo playing. I like orchestral-type players who can fill the room with sound, and Rob does that in such a unique way.” In the rhythm section, bassist Andrew Vogt and drummer Jon Deitemeyer bring an effortless musicality to even the most intense moments in the suite, displaying great imagination as instrumental colorists. 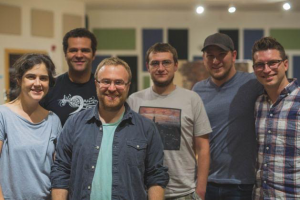 Right away with the opening “Light” (movement 1), a central motif appears: what Daneman refers to as a “voice cloud,” created with the help of co-producer and engineer Gordon van Gent. The details are purposely vague: it could be the sound of an airport, or a street scene. It’s the hum of humanity, simply put. “The voices are what we’re hearing all around us, or in our head,” Daneman observes. “It’s what we’re battling. It’s this static that can sometimes cause anxiety or stress. On the album it ebbs and flows throughout. It starts with this seed and then from there we explore this concept of light, the rise and fall of it, seeing different sides of what that means.”

Both “Light” and the concluding “You Are the Light” (movement 6) are intimately connected for Daneman. “It’s the beginning and the end,” he says. “Where are we starting from, and where are we going? There’s a melody running through those two pieces, but in the second one there are lyrics where there weren’t before. So I guess that’s like a question and answer. And the trading between Greg, Rob and myself is like a battle within: wrestling with ourselves, wrestling with others, coming out stronger on the other end. To me it sums up the whole suite: how do we deal with all the junk going on in the world, around us, within us? My conclusion is essentially that it’s kind of up to us. We can only be that light. ‘You Are the Light’ means we can’t always be looking outward for someone else to be creating that.”

Interspersed between the main suite movements are four interludes. “Eventide” is Vogt’s extraordinary solo electric bass meditation, followed by Daneman’s ruminative extended-technique foray “Dusk”, the expansive piano/vocal duet “Twilight” and finally “Darkness”, what Daneman terms an “epic collision of everything” from the full band. “Each interlude is like the setting of the sun,” he continues, “a different phase, slowly getting darker and darker and then finally the darkness. That’s the idea: how darkness can fall on the world, or our life, slowly over a span of time.”

Daneman intended “Lamps” (movement 2) as a reference to lighting the way forward, but he soon realized it’s also an anagram for “psalm,” the origin of the lyric Ashley Daneman employs on the track. “I gave her the text and based the whole around a bass line motive. She creates these melodies with the text — so that whole track is improvised.” On “Children of the Light” (movement 4) Ashley pursues a similar course: “She digs into what the composition is about, expanding on what little text I give her. The music allows her to be — she’s not singing ‘changes.’” The interior vocal-piano duo passage with Clearfield is a highlight, as is a permutation of the aforementioned “voice cloud,” with all band members invoking the phrase “we are all children of the light”: “Everybody’s finishing each other’s sentences — the idea is that we are all a part of this movement. We are children of this world and we all have this beauty.”

“Just a Little While Longer” (movement 3) is a plaintive flugelhorn meditation, with a rubato opening leading into a mournful rock-tinged tempo. “(Our Fear of) Exposure” (movement 5) centers on “one of our biggest fears, being found out,” Daneman says. “There’s something within us that we just don’t want people to know. It’s not a dark tune — it feels very simple. It’s a look into what is most fearful for us. The piece moves into a collective improvisation, a gradual crescendo. Once we look into the depths of who we are, once we can recognize that, then maybe we can become a little bit more free.” Looking into the depths, after all, is Daneman’s overriding goal with SearchParty. “When I write,” he concludes, “it’s like deep-sea diving in some way. It’s about going into who I am. That’s the best way I can process ideas and thoughts.”

While ancient texts provided the impetus for Light in the Darkness, the musical odyssey that it became is more personal, more idiosyncratic than a pious interpretation could contain. In diving deep, Daneman and his cohorts have managed to uncover universal truths.