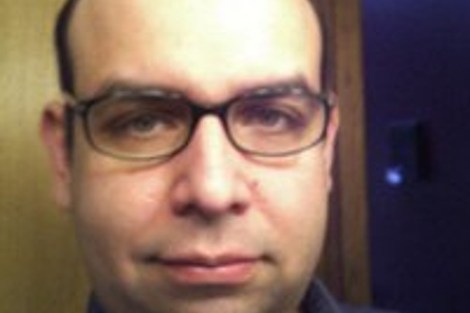 Following Frank Report’s expose on him in February, NXIVM member, Farouk Rojas left the USA and went to Canada. He is one of the longest serving members of NXIVM. He had to flee the US because of his Visa problems. He stayed for several months in Toronto and Montreal then went back to Monterrey for a time. Recently, he returned to Canada and is now living in Vancouver.

Last year, he got permission from Vanguard to date DOS slave Lyvia Cohen of Canada, prior to Vanguard’s arrest in March.

Farouk cannot return to the US. because he overstayed his Visa, sources say.

For those who would like to connect with Farouk – they can follow him on Urbanisticismo on Instagram where the NXIVM follower puts his mobile phone photography online for all to see – and gives clues as to where he is and when.

If you go through the pictures, you can see Farouk is quite a photographer of buildings and scenes in various cities he visits – all taken from his mobile phone.  Follow him from Albany to New York City to Toronto to Monterrey and, now, Vancouver where perhaps he is working to shore up membership in the Society of Protectors.

Farouk is a man who seems not to know what to do or where to go – now that his Vanguard [who does his thinking for him] is in jail.  Farouk has always been poor because of NXIVM. Although he is pretty bright, he never made Proctor on the Stripe Path – not because he was incapable of teaching or even recruiting. It is because he had “an issue’ –he was too fat.

He remains a Yellow Sash with Four Stripes [one stripe away from the NXIVM big money – $20,000 a year – minus cost of Intensives- as a Proctor -symbolized by the exalted Orange Sash].

He was told by Nancy Salzman and Keith – “Lose that fat – and you could be a Proctor”, but somehow, the hapless slob never could do it.  But he had another dream to feast on.   He was going to become – following the NXIVM tech – a singing sensation. [more on that later].

For years, Farouk was seen riding a bicycle in Albany. This was not because he wanted the exercise and wanted to shed that blubber. It was because he did not have a car. Yet even that did not help him peddle off the pounds.

He rode a bike [and gee it was awful cold in winter in Albany on his bicycle]. He had to ride the bike because he lost his driver’s license, because he was completely illegal in the USA, and because he was too poor to afford a car.  He was an illegal alien in the USA for years.

Farouk is Mexican and many foreign born NXIVM members had fake marriages to remain in the USA. One was arranged for him also. He was to marry the niece of Esther Chiappone Carlson. That never happened. The bright woman backed off at the last minute [after the marriage license was obtained]. The woman, after reading about DOS in the Frank Report, left NXIVM last summer and she didn’t marry him.

Farouk remains a coach and expert in Executive Success. He has been a coach for nearly two decades and was one of the earliest of the Mexicans to join the group that promises to teach the secret NXIVM tech that will revolutionize a student’s life.

He recruited, among others, Ivy Nevares – a longtime Raniere harem member – who is presently waiting for Raniere to impregnate her with a promised avatar baby – a task which might be difficult if Raniere is not soon freed from prison since MDC does not permit conjugal visits. Nevares joined the group in 2003 when she was in her early 20s. She was promised an avatar baby shortly after that. She is now in her 40s and her avatar baby window is getting smaller every day.

As a member of NXIVM, Farouk dedicated his life to controlling as much of the world’s wealth that ethical people should – which, in his case, is almost nothing.  The years come and go and he’s as poor as ever.

Much like Kathy Russell, the aging ballerina wannabe, who was recently arrested for racketeering, Farouk too has a great dream – he wants to be a singing star.

Keith Raniere promised him that if he kept practicing his singing, kept serving NXIVM for next-to-nothing [or nothing] and kept paying, with all his available dollars, for more NXIVM classes, he would become the next great world-famous singing star.

He just had a few disintegrations to overcome and he would be the next Frank Sinatra.

To help him out, Keith let him join and help manage [for no pay] NXIVM’s A Cappella singing group, Simply Human – where Farouk performed as many as one or two concerts per year – as a near full time volunteer. But it was all done to get him to stardom – said Raniere.

Ah, cruel fate – just as Keith was going to make Farouk,  and Kathy Russell, and lots os others genuine superstars, he got himself arrested and likely faces life in prison.

Keith promised Pam Cafritz that she would win the Olympics for the Mile Run – but the poor girl also failed. She up and died.

It is not as if Farouk left nothing behind for his long years serving NXIVM as a coach and recruiter. He was good enough to stiff Paragon Way Inc. – a collection and repossession service [Farouk Rojas Judgment]. for $1386.24

Good luck collecting on that one.

Farouk has a page on Sound Cloud for people to listen to his dulcet tones, but lamentably there are no songs currently there for fans to hear.

All kidding aside, the invidious cult of NXIVM led by the deceptive Keith Alan Raniere – cynically took the time and money of people’s lives from them – cheating them at every turn – promising them impossible dreams – for money and their services.

Some of them still don’t get it.  They were fooled – like Kathy, Ivy, Pam, Farouk and many others.

Now, Vanguard is in jail and some are mocking him for his gullibility. He actually believes his Bronfman-paid lawyers that he is going to be acquitted.