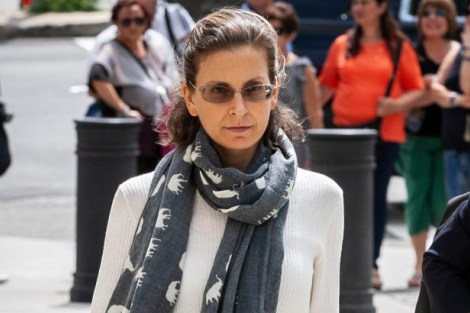 The terms of Clare Bronfman’s home detention are in writing on PACER [www.pacer.gov] – the Federal Government website  that records all federal court filings. The public can access on PACER documents for a fee.

The minutes from her last court appearance state that Clare Bronfman can – with prior arrangement with Pretrial Services – leave her luxury apartment in Manhattan every day of the week for a limited time period each day.

Here is the “Minute Entry for proceedings held before Judge Nicholas G. Garaufis”:

“Bail Hearing as to Clare Bronfman held on 8/21/2018. The $50 million in cash, securities, and other collateral needed to secure the bond has been finalized.

“On the other four days of each week, she is permitted to visit a fitness center for exercise on a schedule that Pre-Trial Services must approve in advance.

“Additionally, she may not directly or indirectly associate or have contact with–except in the presence of her attorneys–current or former employees of, or independent contractors, for NXIVM (including any and all affiliated entities), any individual that she knows to be a current or former member of DOS, or any individual who is currently, or was formerly, on the Stripe Path, subject to reasonable exceptions agreed upon by the parties.

Still pending before the court is whether Clare can freely communicate with a NXIVM member – and her longtime bookkeeper – believed to be Michelle ‘Shelly’ Tarzia – who is expected to be a witness for the prosecution. The judge has not yet made a decision.

The prosecution objects to Clare speaking with the bookkeeper alone – but has no objection to Clare employing the bookkeeper – provided she only speak with her with a defense attorney present. The concern of the prosecution is that Clare might tamper with, bribe or intimidate the witness.

At her last appearance, Clare sought the right to spend the entire day out of her Manhattan apartment with limited travel to parts of Manhattan, Queens and Brooklyn. Her attorney, Susan Necheles, indicated Clare was restless in her luxury apartment because she was used to jogging and being active outdoors and that the unfair restrictions on Clare were simply imposed by the judge because of her wealth.

She asked the court to allow Clare to be able to leave at 6:00 AM and return each night to her apartment at 8:00 PM. The judge denied this request but gave her attorneys leave to ask again in October.

It was read into the record at her bail hearing that several victims filed a letter with the court about her bail terms. It is assumed the victims strongly opposed her release from home detention. The judge has not made the letter public.

Clare’s attorney however scoffed at the letter, condemning its contents and authorship – essentially decrying the idea that there were any victims of Clare or that they had anything to fear from her client.

On my website, Frank Report, I raised concerns that Clare Bronfman may not have disclosed her complete financial holdings to the court – perhaps, for example, leaving off her extensive real estate holdings in and around Los Angeles.  That and the fact that she moved millions of dollars offshore – just prior to forming trusts with Goldman Sachs – might prompt the Feds to seek a full-scale forensic audit of her finances.

A few months prior to her indictment (but likely after she knew she was one of the targets of a Federal investigation), Clare put about $125 million in the hands of trustees with Goldman Sachs – in a trust with terms that she cannot replace the trustees or direct them as to how to spend the money on her.  This may have been done following advice of counsel as a protective move to avoid seizure – since the money is technically not in her control but in trust with her as beneficiary.

It is believed that in addition to the trust, millions of dollars were moved in April in anticipation of her indictment – some of it going offshore.  Curiously, Clare initially neglected to mention her holdings on Wakaya Island in Fiji to the court. When caught by the judge, her attorney said she did not list that asset because the property was undergoing renovation.

It is unclear why Bronfman failed to disclose her real estate holdings in Los Angeles to the court – unless, of course, she had previously transferred them to her sister, Sara, or someone else to keep them outside the court’s purview.

It has been widely noted that Sara Bronfman-Igtet did not appear in Brooklyn to help Clare make bail in late July – but pledged some $8 million of US real estate for Clare’s bail package.

Some speculate that Sara chose not to appear because she feared being arrested once in US jurisdiction. Sara is reportedly in France or England. France does not always accommodate the US with extradition requests. [if anyone knows Sara’s exact whereabouts, please advise me at frankparlato@gmail,com].

Clare’s various financial schemes might be for naught.  Sources say the Feds are not done investigating Clare and while the current charges are relatively few, there may be additional charges coming.

If it is proven Clare that misled the court about her assets, the prosecution might seek to have her bail revoked and have her remanded to Metropolitan Detention Center (MDC) to spend her days in the women’s section of the same prison that her Vanguard – Keith Alan Raniere – resides in while he awaits trial.

Although they might be housed in the same facility, the two would not be able to communicate because MDC separates women from men.

In the meantime, Clare can now go to church or temple, join a gym, shop, jog, etc. for approximately an hour and a half every day.

She cannot spend time with NXIVM members – for such contact is strictly forbidden. For years, she has had a cadre of NXIVM minions – paid mostly at rates of some $15 per hour – to do her bidding.

The servant problem is tough in Manhattan but it appears, at least for now, she will have to make do with non-NXIVM servants.

Don’t be surprised if Clare, like Allison, makes a request to go outside the home for school, volunteer work, or even a job for her purported betterment. It might be granted if Pretrial Services approves and the prosecution does not object.