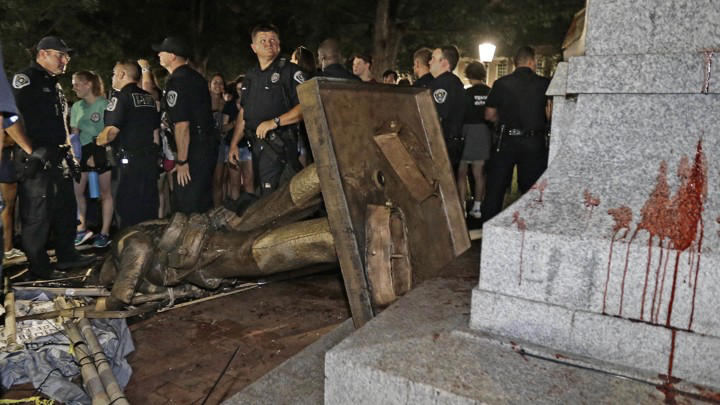 Recently we witnessed the tragic and grossly illegal toppling of the “Silent Sam” statue on the campus
of the University of North Carolina at Chapel Hill by a crowd of enraged protesters. Silent Sam had
stood for over 100 years as a memorial to fallen soldiers of the Confederacy. He represented not a
single, specific individual, but a great mass of several hundred thousand Confederate soldiers who died
fighting for their homeland, albeit a homeland that practiced slavery. He especially stood for the UNC
alumni who died in the Civil War.

A campaign to have the statue removed from campus had been active for years, but the mob
that formed on August 20 th was not inclined to wait. Silent Sam was knocked to the ground and
stomped on by euphoric radicals. All this was done in the name of anti-racism and to defeat “white
supremacy,” which in point of fact receded as a meaningful force in American politics decades ago.
Besides a tiny fringe of genuine hardcore racists and “Nazis” in the U.S., white supremacy has become,
more than anything, a rallying cry for the Left, and an excuse to bully, silence, and even physically
assault conservatives. Racism is and ought to be condemned by the vast majority of Americans, but the
use of violent and illegal tactics to achieve one’s political goals is never acceptable.

The Left’s rationale for the removal of the Silent Sam statue rested largely on the fact that it was
dedicated by, among others, the avowed racist Julian Carr, who saw Silent Sam as embodying the
“Anglo Saxon race” in the South. This was indeed an inauspicious start for the statue, but the fact is
that Silent Sam himself had no explicit connection to white supremacy – he is, or was, simply a weary
Rebel soldier, who represented ordinary combatant Southerners, the vast majority of whom did not own
slaves, but who did feel a duty to defend their homeland from what was perceived as “Northern
Aggression”. Regardless of the justice of their cause, these men fought and died in appalling numbers,
and it is not unreasonable that the people of North Carolina, and the state of North Carolina, would
honor their courage and their sacrifice.

While we must concede that the Left is correct that Silent Sam does have some potentially
negative associations, the bigger problem is that the Left’s desire to expunge historical symbols with
such “baggage” is extremely selective. Very few historical personages rise to the level of moral purity
and perfection demanded by the modern-day acolytes of political correctness. And, if all historical
heroes and heroines are flawed, who are liberals to decide which of these luminaries are to be
consigned to the dustbin of history?

To take an obvious example, liberals are united in celebrating the contributions of Susan B.
Anthony to the cause of women’s liberation and female suffrage. The fact of the matter is, however,
that Anthony was a racist, who opposed passage of the 15th Amendment, which enfranchised black
men, because she believed that white women, due to their superior “intelligence, justice, and morality”,
should have received the vote first, and “the negro” last. She referred to newly emancipated black men as
“densely ignorant”. That racist philosophy, however, has never prevented leftists from lauding Susan B.
Anthony, from erecting statues in her honor, or from pushing for her face to appear on the currency of
the United States.

Liberals seem to take the view that, if an historical personage was, in the main, “on the right
side of history,” then his or her sins, no matter how inexcusable by modern standards, can be forgiven
and forgotten. In fact, even to raise questions about his or her virtues, as I have with Susan B. Anthony,
is to invite a charge of racism or sexism on oneself. Simply put, the heroes in the liberal pantheon are
effectively beyond reproach. They occupy holy ground on which no critical thinker may tread.
If, by contrast, liberals simply don’t like an historical figure, or they associate him or her with
retrograde or conservative beliefs, that individual’s flaws becoming defining features, and he or she can
never be celebrated or memorialized, and can only be discussed in the context of evil, oppression, and
injustice. The fact that even people who do bad things can have good qualities, worthy of examination
and even admiration, offends the black-or-white moral code by which liberals live. To them, the verdict of history is an all-or-nothing affair: you are either with us, or you are against us, and “us” means the
modern Left itself, the views of which are the only (self-referential) standard of rectitude liberals
recognize. No higher law exists than this: the Left must prevail – over the past, over the present, and
over the future.

In the end, conservatives must oppose the toppling of the Silent Sam statue for two reasons.
First, because it is an affront to the rule of law and an instance of mob rule. Second, because how we
interpret history is a reflection of the cultural and moral values that we practice and hold dear. We
simply cannot afford to hand our nation’s heritage over to leftists, who will expunge and destroy
everyone, and everything, that fails to live up to their totalitarian vision of the perfect society. After a
few years, we would have nothing left but a jerry-rigged gallery of purported heroes and villains, useful
only as props in liberal propaganda.

Sadly, Silent Sam was twice a victim of history. He died first on the battlefields of the Civil
War, fighting for a cause that was arguably doomed from the start. Last week, he died a second time – a
victim of liberal rage and intolerance, and of political correctness gone berserk.
Left’s do all that we can to make sure that the next chapter in American history won’t be written
by a left-wing mob.