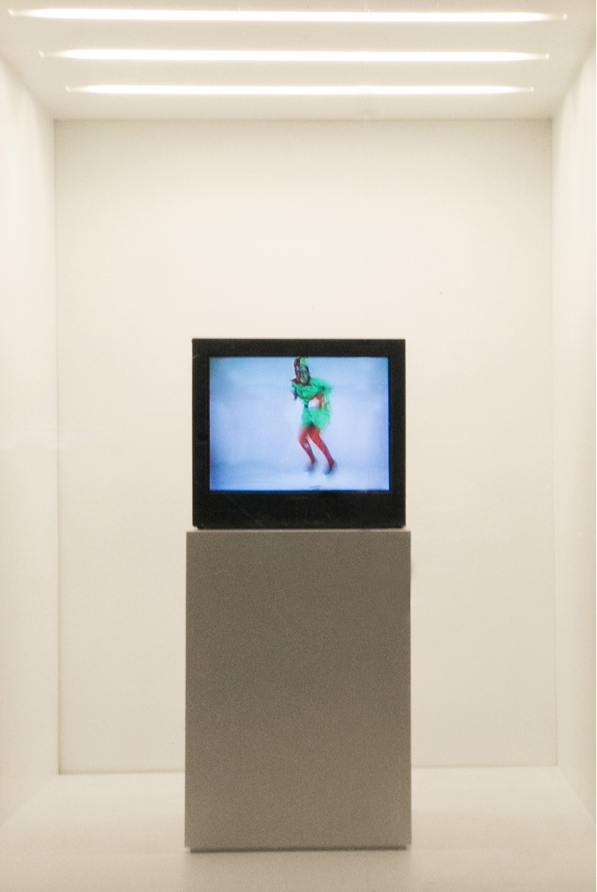 Rochester, NY, August 27, 2018 — The Memorial Art Gallery of the University of Rochester (MAG) is pleased to announce No, No, New Museum, an iconic video work by Bruce Nauman, one of the most influential artists to emerge since the late 1960s.

On view in MAG’s Media Arts Watch gallery, No, No, New Museum is an endlessly looped video recording of a green-costumed jester performing a temper tantrum, incessantly protesting “no, no, no, no, no…!” There’s no mistaking it: this is a full-fledged, albeit scripted, temper tantrum. The sharp, jarring cuts and tight focus make the high-pitched and delirious expression of frustration and rejection even more intense, abrasive, and disturbing than it would otherwise be.

Part of a series called “Clown Torture,” the video was commissioned for the New Museum in New York City. It was originally displayed in the museum’s storefront window on Broadway in 1987, where it insisted on questioning the very existence of the museum that had commissioned it. Within the context of an encyclopedic art museum such as MAG, the work may invoke issues relating to the purview of historical institutions and the challenges they face within a changing world. No, No, New Museum has been generously loaned by Art Bridges, a foundation established by Walmart heiress Alice Walton. The Foundation is dedicated to sharing outstanding works of American art with regional art museums.

Bruce Nauman is a pioneering artist who questions aesthetic values and established norms of good and bad. His artistic efforts are as urgent today as they’ve ever been, when so many established norms are being upended.

Although his work is not easily defined by its materials, style, or themes, sculpture is central to it, and it is characteristic in the way it blends ideas from Conceptualism, Minimalism, performance art, and video art. The revival of interest in Marcel Duchamp in the 1960s also clearly influenced Nauman in various ways, from encouraging his love of wordplay to infusing his work with a satirical and sometimes absurdist tone. Despite the impact of Dada, however, he has continued to view his art less as a playful or creative enterprise than as a serious research endeavor, one he likes to carry out in seclusion from the art world, one that is shaped by his interests in ethics and politics.

About “Media Arts Watch”
“Media Arts Watch” is a three-year initiative to introduce the art of the moving image into the curatorial program and permanent collection of MAG. Media art is art that explores the technologies and aesthetics of film and video as well as the emerging tools and practices of computers, virtual reality, the internet, software, and mobile devices.