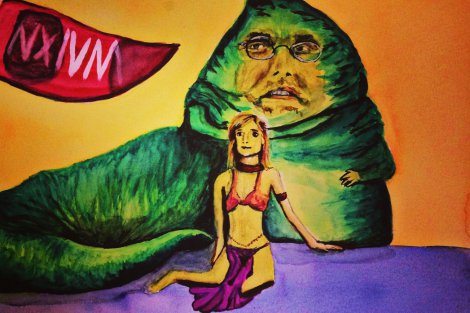 Instagram says painting violated their policy on ‘harassment and bullying”
The artist MK10ART’s new painting of Allison Mack and Keith Raniere was deleted by Instagram.
MK10ART tells Frank Report, “Thank you for posting my paintings along with your kind commentary.  I really appreciated it!  I thought you might be interested in knowing that I just had a painting taken down [from Instagram] in less than 24 hours (see attached). 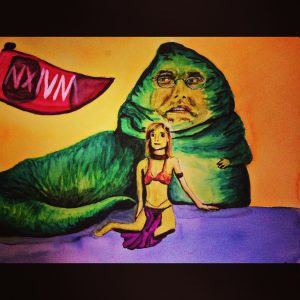 “It’s caption was ‘Vanguard aka Keith Raniere as Jabba the Hut, a giant slug who kept female slaves.  Allison Mack, his willing slave, is apparently ready to go to prison for him.'” 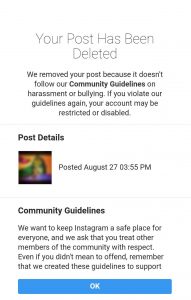 “Instagram won’t tell me who complained or why – just the form letter I sent you that I supposedly didn’t follow ‘community guidelines’ They also banned my hashtag too (see attached). Thank you for the support! 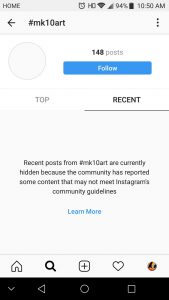 It is chilling that Instagram banned this as ‘bullying.”
How do they decide?
Were someone to paint something equally condemnatory of modern day Nazis, or ISIS terrorists, would they be banned? How about Carlos Salinas? Obama? Trump?
Here is another of MK10ART’s recent work [that has not yet been banned]. 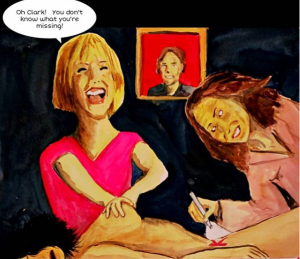 “[NXIVM] members were branded with a cauterizing pen with a logo [by Dr. Danielle Roberts] including Raniere’s [and Allison Mack’s] initials.”

MK10ART writes, “During the branding ceremony, prosecutors say Mack placed her hands on the slaves’ chest as they cried, telling them to ‘feel the pain’ and ‘think of (their) master.'”