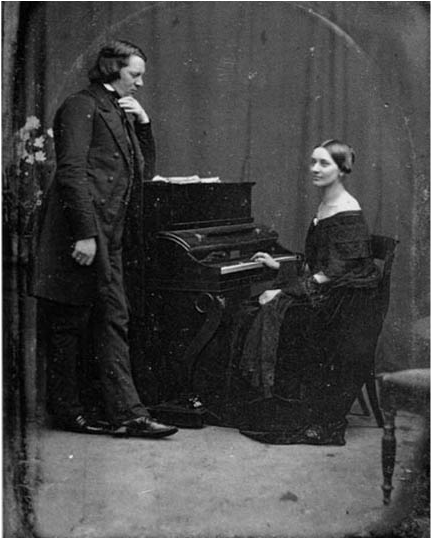 With the passage of time comes the passage of fads and fixations. In the early 20th Century, in musical circles where serious music was avidly consumed, and when concert halls in America were routinely filled up, Finnish composer, Jean Sibelius was all the rage. While Sibelius is of course one of the “greats” in the ranks of composers of serious music, his works do not dominate most symphony halls as they once did.

Popular preferences of listeners and casual, parlor pianists in the first half of the 20th Century in serious music in America is revealed somewhat in vintage compilations, such as in the Robbins Mammoth Collection of Famous Piano Music. Such anthologies and compilations were popular and provide some insight into the “classical” (or serious music, a more apt term, given that not all of this music was composed in and consists of harmonies and textures common to the classical era) preferences of players and listeners in the first half of the 20th Century.

One such piece that enjoyed popularity among players and listeners was Schumann’s “Romance” number 2, Opus 28.(click the link to listen to Van Cliburn’s recording)

While perhaps not as popular from the Schumann catalog as “Traumeri,” from Kinderscenzen Opus 15, Romance No. 2 shares with Traumeri Schumann’s contemplative, tranquility. However, unlike Traumeri, Romance 2 provides for a very intense, yet measured middle section. 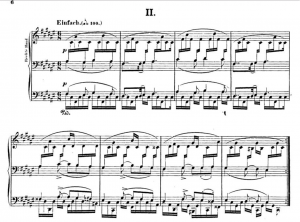 The piano score is written over three staves, for visual clarity (notwithstanding some players may at first find this cumbersome). The right hand plays the top top staves. The melody is nicely sandwiched in the middle stave, and not the typical highest note in the vertical stack. The pattern of the three staves is reminiscent of a string section, violins on, basses and cellos on bottom, fleshing out by arpeggiation, the chordal structures. The melody in this piece, were it a string arrangement, would appropriately be assumed by the cello. Were it a string quartet, quite possibly a viola.

In a third below, as is played by the thumb of the let hand, is found a harmony, following the melody in thirds at each note across the first four bars. This adds considerable texture to the melody, and, again in a string mindset, this lower third voice would probably also be played by a cello.

The time signature is 6/8, a variation of 3/4, providing the piece with that unresolved pulse that uneven time signatures provide. The key signature, F# major, rests easily under the fingers for the arpeggiated style of the piece. The first four bars of the piece proceed along, with a I or F# pedal, while the upper voices arpeggiate to create a I, V, V7, I, vi, V, I.

By the fifth bar, we are treated to a VI 7, preparing the way for a ii, followed by a V7 6/5 of V to V7, with a bit of dancing around that V until it rests there, preparing us for a transition to ii. \

At bar 9, we reach a point that separates Schumann from the boys. The intensity of his determination, and choice modulations here truly set him apart. Such ferociousness of concentrated energy would surely be attempted by his pupil, Johannes Brahms, but (in my opinion) although Brahms was arguably an unsurpassed formalist, he lacked the emotional delivery of Schumann, and was somewhat less efficient in his delivery.

But Schumann makes it clear that this passage will move along. He remains on ii for but 2 eights he reaches another modulatory chord, and its preparations following, a V7 of VI. But wait! Once VI (or vi, as we might anticipate) is reached, we are deceived: it is not a vi or VI at all, but a half diminished seven chord, functioning as a iiø7 to v. Clever. Schumann confirms this relationship when at bar 13, and in a low, stately register, provides us with a doubly confirming C# octave in the left hand. From bars 9 to the beginning of 13, we go through a modulatory play, our ears being deprived of cadence and customary modulation expectations before we reach v, or C#, and when C# is reached, like the deceptive vi, Schumann does not remain. He immediately proceeds through a group of diminished seventh chords, starting with a iiø7 of V or v, at F#, and proceeds in sequence until reaching, ultimately, at the ritard, a diminished seventh that would arguably be more appropriate and preparatory of V, but, and most duplicitously, takes us back to F#, ALBEIT with the bass resting firmly on C# or five. Again, incredibly clever. A very neat, deceptive play of diminished sevenths in anticipation of what satisfies both I and V expectations at the same time (with this kind of duplicitous skill, he could have made for a very good politician).

By the second half of the 19th bar, Schumann abandons his little device and comfortably reasserts the proper F#, 6/3 formation in the form of a cadence. There is again, the modulation to ii, and this time, to IV (as was a common stop- off point towards the end of a piece in sonata form, hitherto previously unvisited). We traverse then through neighbor-tone-of-V-led chordal movements until a I 6/4, V 4/2, and vii 6/5 of ii, which is thwarted by a III 7, and the pattern of neighbor-tone-led chordal movements around ii is manifested before working our way back up to I, or F# at bar 30 and then finally at bar 31.

From bar 31, we have returned to the texture of the beginning, somewhat subdued, ready to conclude.

This piece, of course, is not “forgotten,” just as the music of the classical masters has not been forgotten. But this piece, and others like it, seemed to enjoy some popularity in the earlier 20th Century, such that it was a featured piece in various anthologies and compilations. It was placed in anthologies and compilations alongside works by the likes of composers such as Selim Palmgren, another Finnish composer, whose “May Night” was quite popular in its day.

This little gem of a piece, certainly deserves the recognition it has enjoyed, along with the other two Opus 28 Romances (which should all be played together.) It is a masterful little piece.