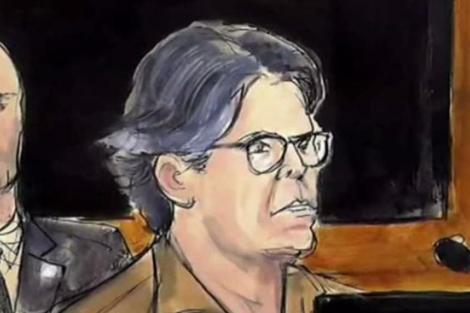 Guest View: By A Reader Who Is Informed

This bail request by Keith’s attorney is faulty on many levels and when you are being paid $1500-$2500 an hour it is hard to stop laughing all the way to the bank. At this rate that Bronfman Legal Trust Fund will be depleted before we get to trial. I do recall the Judge in court asking Keith if he was represented by attorney. The judge did advise that the court would appoint an attorney if he should need one any time in the future. The wise judge may see the handwriting on the wall.

1. The language smells of Keith dictating and his attorney, Marc Agnifilio, dutifully recording Keith’s “projections” of all the accusations of his victims.

Mr. Agnifilio I suggest a private lesson on the Projection Module.

2. The First Amendment clearly states our right to an open and free press. Anyone wanting to put upwards of $100 million to bail out Keith should not be permitted anonymity. If you support Keith, have the courage and conviction to do it publicly. So many inconsistencies.

Perhaps Mr Agnifilio could use a lesson from his client Keith on being ethical and consistent with his values and beliefs.

The bigger issue here is that the judge stated in June that bail was denied because Keith has no assets and therefore had no skin in the game. That has not changed and I don’t see this 13-page letter addressing that fact.

3. Keith is a proven flight risk. He did it once and he will do it again. OJ Simpson was not given bail because of his infamous chase. Why would Keith be more special than OJ, a public figure and revered football hero? No, Keith, your only fame is being a lazy, pedophile, rapist, tax-evader, money launderer, all of which will be proven in this trial.

4. The Anonymous friends of Keith; who could they be? Wealthy celebrity types needing to shield themselves from public ridicule or devotees pooling their meager assets to support their leader? Keith is the dispensable evil front for something that has tentacles that go way deeper. Keith is like a rat in a box. He will risk his very life to see the light of day.

I doubt the judge will grant bail or any closed door sealed hearing. That is reserved for cases involving minors and matrimonial files.

The true danger here is that Keith risks being murdered by those seeking his silence. The case falls apart and Bronfman goes free with perhaps a Kathy Russell doing 3-5

Everyone is happy and the money laundering operation is back in business. Happy ending!

THIS BAIL REQUEST NEEDS TO BE SHUT DOWN COMPLETELY WITHOUT ANY OPPORTUNITY FOR FURTHER REQUESTS!