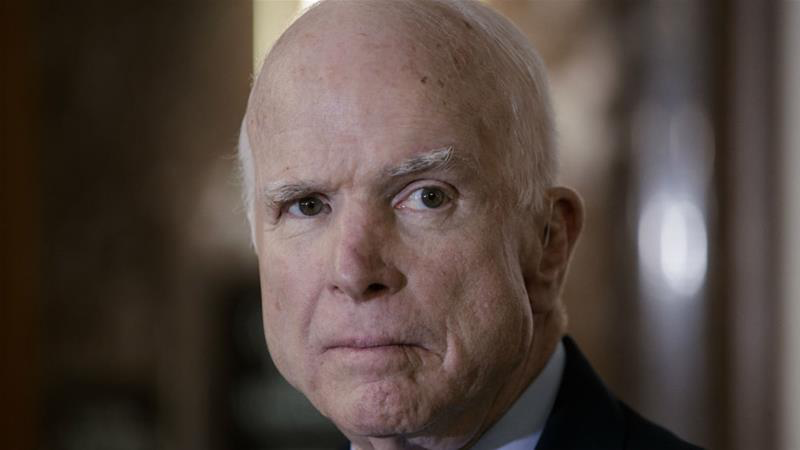 Senator John McCain was a powerhouse in American politics. His legacy is far reaching and impacts every facet of civil life in our country. I didn’t always agree with him, especially on matters of foreign policy, but Americans always knew where he stood on the issues; and one always trusted that he arrived at his opinions by way of thoughtful analysis, battled tested experience, and a sense of personal integrity that transcended party lines. This week of national mourning is appropriate in light of his tremendous influence.

Now for a little straight talk. For a man who defended the role of free speech in a free society, I believe that he wouldn’t mind me speaking my truth, even if it offends some people, or makes some people angry. As an anti-war activist, I detest Senator McCain’s long and relentless promotion of military intervention,  foreign invasions, use of deadly technologies, and ends justify the means policies. He was one of the most hawkish senators in Congress, and he was at the epicenter of some of the most catastrophic military escapades of the 20th century.

First and foremost, McCain was a robust supporter of the Bush position on Iraq from the very beginning. He stated that Iraq was “a clear and present danger to the United States,” and voted earnestly for the Iraq War Resolution in October 2002.  In 2004 he strongly endorsed President Bush, championing his overall management of the War on Terror.

In 2007 (after 4 years of on the ground appraisal and public scrutiny) McCain continued to support this war with maximum effort. He heavily favored the Iraq troop surge in 2007, stating, “I would rather lose a campaign than a war.” Somehow in August 2009 he reasserted that the war in Afghanistan was winnable.

Despite McCain’s vigorous defense of these wars, the facts are straightforward. Bush’s position on Iraq was fundamentally dishonest, misguided, and prefabricated. The Iraq War Resolution was an epic mistake that resulted in untold losses. The Iraq troop surge did not accomplish what it was intended to do. And from Bush to Trump, the overall management of the War on Terror has been a complete and utter disaster.

A much referenced study by Brown University found that the 2003-2010 Iraq war totaled over 1.1. trillion. With indirect and delayed costs factored in, the Congressional Budget Office has estimated that the war has cost nearly 2 trillion, which comes out to about $6,300 per U.S. Citizen. (Medical and disability claims by veterans has risen to 130 billion.)

More importantly, Brown found that the human costs of wars in Iraq, Afghanistan, and Pakistan totaled 395, 000. Other agencies and NGOs have stated that this figure surpasses 1 million.  Everyone agrees that nearly 7,000 U.S. military have died, making these wars the most deadly for Americans since Vietnam.

Yet McCain stated: ” As Americans, we acted swiftly, we liberated Afghanistan from the murderous rule of the Taliban, our attackers (9/11) proud hosts. We chased Al Qaeda around the globe. We revamped our homeland security, reorganized our intelligence community, and advocated reform in calcified societies.”

Not true. The wars in Afghanistan and Iraq have hardly been swift or victorious. The murderous rule of the Taliban persists to this day. Al Qaeda has not been defeated militarily. McCain never apologized for his active support of these wars. Nor did McCain reverse course on a foreign policy agenda that could have entangled America in more wars just like them. For example, as a member of the Senate National Security Caucus and eventual Chair of Armed Services, he was a vocal supporter of the 2011 military intervention in Libya. He actively lobbied for war in Syria (especially after the 2013 Ghouta chemical attack), and he voted to prop up the Saudi Arabian military intervention in Yemen against the Shia Houthis, even remarking, “I’m sure civilians die in war. Not nearly as many as the Houthis have executed.” Of course this is to say nothing about his endless saber rattling with Iran.

It is fair to say that if John McCain became president in 2008, he would have involved the United States of America in no less than seven wars at the same time (i.e., Iraq, Afghanistan, Pakistan, Yemen, Syria, Libya, and Russia).

To reiterate, no one can doubt John McCain’s convictions, sacrifice, commitment to the advancement of American values, and devotion to his family and faith. A man who has dedicated so much of his time and energy to the cause of public service deserves to be eulogized and honored by our nation. But stated in the spirit of a maverick just like him, I also want to remind this country that his convictions resulted in a fantastical amount of bloodshed. I also want to remind this country that his beliefs about sacrifice and commitment resulted in the needless suffering of millions of innocent civilians. And I want to remind this country that what he believed was the advancement of American values has come at the expense of freedoms and liberties for those who will never step foot on American shores or be protected by American laws.

In the end, Senator John McCain was a warrior and not a peacemaker. He was a staunch advocate of using military might to solve problems. He was a man, I am thankful to say, who never had the chance to fully enact his foreign policy worldview.