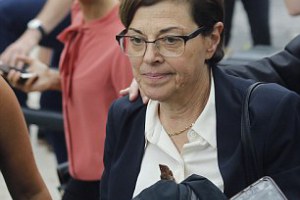 According to a source, –  and published reports –  the Prefect, Nancy Salzman, 64, through her attorney, Robert Soloway, is engaged in plea discussions with prosecutors for the US Department of Justice, Eastern District of New York.

Salzman did not appear in court for the status conference earlier today. The court was told she was recovering from surgery.

Last month, Salzman told the court she is suffering from a life-threatening illness. In August 2017, she told friends she had breast cancer and would use the NXIVM technology exclusively to heal it.

“It would be pretty unusual for a defense lawyer not to consider what the government has to say,” Soloway said, when asked about the possibility that he was in discussions with the government to cut a deal for Salzman.

Salzman is the co-founder of NXIVM, its president, and, in my opinion, a longtime stooge and virtual slave of NXIVM’s leader, Keith Alan Raniere – known also as Vanguard.

FBI agents seized over $500,000 in cash from Salzman’s home – most of it found in a shoebox – during a raid on her home on March 27th – one day after Raniere was brought to the US from Mexico on an arrest warrant for sex trafficking.

Salzman has not been charged with sex trafficking but on racketeering charges.

Any plea deal Salzman cuts will undoubtedly require her to testify against Raniere.

If her condition is grave enough, and there is a chance she will not live until trial, legal sources say her testimony will be videotaped in advance, and both the prosecution and the defense will have an opportunity to cross-examine her.  In the event that she dies or is incapacitated before trial, this videotape would be presented at trial and seen by the jury.

If she is well enough to testify, the videotape would be disregarded and she would appear live in court.

Since a superseding indictment is likely – [according to Assistant US Attorney Moira Penza] – the trial will not likely take place at its now-scheduled January 2019 date – but kicked back to at least June 2019.

If Salzman is at death’s door, there might be little reason for her to cut a deal – which suggests there is hope for her recovery,  By making a plea deal, she would be spared the health-draining and stressful requirements to appear and be tried.  By making a deal, she can concentrate on wellness and put the stress of prosecution behind her.  She might even be able to get a no-jail deal in return for a “tell-all” on Raniere.

This is likely something Soloway is working toward and something Salzman could deliver in spades. Salzman knows much and can tell much.

If the information she provides is good enough, Salzman may even be able to get some sort of reduced charges for her daughter, Lauren – and perhaps no-charges for her other daughter, Michelle, and Michelle’s husband, Ben Meyers. But that would require that Nancy become a very pro-active witness – and tell virtually everything she knows about all of NXIVM’s illegal activities.

It appears the prosecution is not adverse to making a deal with Salzman. Whether it will result in a no-jail plea deal is anybody’s guess. It may depend on how much Salzman can serve up on Raniere and his primary partner-in-crime Clare Bronfman.

Bronfman supplanted Salzman in 2009 as the de facto second in command in NXIVM, although Salzman continued to retain the title of president of NXIVM.

For several years, Raniere cut off Salzman’s salary and assigned Clare Bronfman to control what money she was allowed to receive. Raniere did this, he said, because Salzman had issues with money. Consequently, Salzman had to get Clare’s permission for all her expenditures. 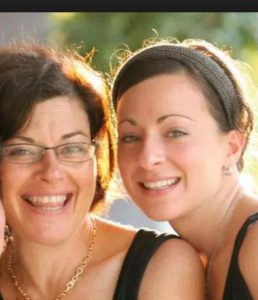 It’s also possible that Nancy [l] may be able to persuade daughter, Lauren [r], to cut a plea deal – and sooner rather than later. Whether other defendants, including Allison Mack, are also in plea negotiations is not known.

The fact that Assistant US Attorney Penza revealed in court that one of the defendants is in plea negotiations seems a strategic move: letting other defendants know their united defense is not a reality.

It is well known in the criminal defense world that the early bird gets the worm – that the first ones to make plea deals get the best deals.

This mention of one of them falling – by the prosecution –  might signal to the other defendants [and their attorneys] that the time has come  – that it’s now or never – to cut a deal, rather than take the fall for Keith Alan Raniere – who’s going down anyway.

It makes sense. If Prefect herself is making a deal, why should the others remain with that sinking ship of fools who sail under the flag of the Vanguard?

Click here to post a comment
Court hearing yesterday – with ‘library floors’ worth of discovery, Vanguard’s strategy and Prefect’s defection
Status Conference: Someone is about to take a plea deal – another superseding indictment coming – Frank Parlato “terrifying” NXIVM members seeking to bail Raniere