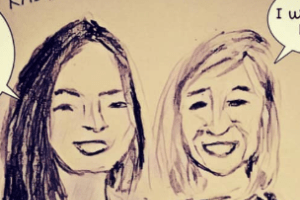 In an ongoing effort to preserve copies of MK10ART – since at least one picture was summarily removed by Instagram – Frank Report is proud to post several more of this brilliant artist’s NXIVM works.

[Kristin Kreuk claimed to know nothing – yet how did she not know about allegations of pedophilia?]

[The years passed and so many defendants said NXIVM was dangerous and nobody believed them. Now High Rank NXIVM members are defendants and the DOJ Eastern District of NY says they are indeed dangerous. There is a huge story behind the manipulation of the legal system by Bronfman dollars yet to be told.]

[A scene from the trial.]

Compare this with the chart Raniere made for Toni Natalie [below].

[Judo champ thrown on his keister by inmate stealing his food.]

Catherine Oxenberg was an avenging angel – or did she channel St. Michael?

MK10ART can also do some striking portraits that to me are better than photographs in capturing the true bestiality, carnality, depravity, and stupidity of followers of Keith Raniere.

More on the ‘cult’ that may be worse than NXIVM – OneTaste
Reader: Kristin Kreuk recruited her posse into NXIVM
Comment