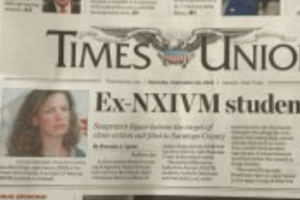 Sara Bronfman picture is on the front page of the Albany Times Union today. She made top of the fold in a TU report on attorney Omar Rosales’ class action lawsuit against her for allegedly supporting the financial deception of NXIVM students. 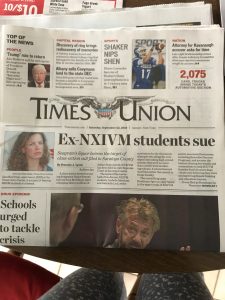 The story is also online on the Times Union website: https://www.timesunion.com/news/article/Sara-Bronfman-target-of-class-action-lawsuit-13245338.php

Up until a few months ago, Sara Bronfman lived in carefree splendor in mansions in three countries. Her extreme selfishness was hidden behind a boatload of virtue signaling on Twitter and Facebook. Her social media accounts are now shut down.

Recently, she declined to come to the US to help bail her sister – sending her husband and mother instead – thus avoiding the risk of arrest in the US. She pledged $8 million in US real estate – out of her estimated $400 million inherited fortune – to help her sister make $100 million bail bond.

Sara may need to keep most of her assets unencumbered – to make a [$100 million?] bail bond for herself.

With Nancy Salzman rumored to be seeking a plea deal – which will likely require her testifying about what she knows about the criminality of the Bronfman-Raniere crime organization, Sara may also be indicted soon.

Some have tried to excuse Sara’s role in NXIVM — saying she did not know much and, unlike her sister, Clare Bronfman  – Sara did not enjoy going after Raniere’s former lovers and friends for the pleasure of it.

Some say, “Sara is a sweet girl. She didn’t know how bad the monster was….”

But is this true?

She knew about allegations of pedophilia. They were published in the Times Union in early 2012. If she had bothered to check them out – such serious allegations – out of a sense of justice – in good conscience – or simply out of prudence  – if she actually contacted the numerous women/child victims –  named in the story – she would have learned these women were likely telling the truth.

Sara had money enough to do this. She did not have to contact them personally. She could have quietly hired private detectives to ascertain the truth. She could have found out if Keith Raneire is a pedophile? Maybe she didn’t care.

Beyond pedophilia, Sara knew about allegations of rape of adult women – like Toni Natalie.  After Natalie publicly said she was raped repeatedly by Raniere – did Sara check it out? Did she care if Toni Natalie was raped?

She funded Raniere’s quest for Toni’s destruction.  She funded the man who allegedly raped a woman to help him further destroy that woman. It is extraordinary.

She funded the massive effort to get Toni indicted on the pusillanimous charge of computer trespassing charges – [pusillanimous compared with rape – I would say] — charges that were only sustained by her sister, Clare’s lying – – and dropped when the court found out she was lying.

Did Sara ever once say – “Keith, let Toni go? She was your ex-girlfriend for God’s sake- move along. This is a fight over nothing – over pennies. But you want to punish her over the decades? I’m not going to fund it.”

Had she said that, Raniere would likely have had to back down.

She supported his vicious attack on Barbara Bouchey – her former friend – and adviser and Raniere’s lover.

When Raniere said in effect to Sara Bronfman, “Destroy Bouchey”, Sara did not say, “No, Keith, not with my money. I did not know your former lover, Toni Natalie – but I know your former lover, Barbara Bouchey. She is my friend. She was like my sister.  We built NXIVM together. Let her go on with her life. Even if you do not want to return the $1.6 million you swindled her out of by lying to her about the commodities market – you don’t have to ruin her.”

But, no, Sara Bronfman did not say that. Instead, she gave Raniere millions of dollars to destroy Bouchey.

It backfired. Bouchey had to reveal many damning secrets about Raniere and Bronfman – when she was deposed and testified in their multiple lawsuits against her.  It was insane. It was through litigation against Bouchey that the world found out about Keith’s enormous sexual appetite – his ruthless Bronfman-funded litigation – and how he squandered nearly $100 million of  Bronfman money in commodities and real estate deals that ran amok, failed spectacularly and increasingly looked like swindles.

And when Raniere told Sara Bronfman to destroy me, again she did not say anything.  She could have said, “No, Frank Parlato discovered that my sister and I were being swindled and recovered $26 million in assets that we otherwise would have lost. It would be the height of ingratitude to go after someone who did us good.”

No, she did not say that. Instead, she participated in an attempt to destroy my life. She and her sister made a false complaint against me with the FBI, claiming I stole a million dollars from them – pure perjury, pure lying to the FBI.

The worm has turned. 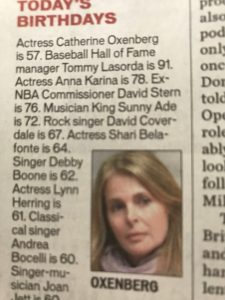 Finally, it is with glee that I announce that, in the same edition of the newspaper that announced the lawsuit against Sara Bronfman, an announcement appeared informing readers it is Catherine Oxenberg’s birthday.

Catherine was the one who first told me about the branding of women. I published the story on June 4, 2017 – four months before the New York Times. Hundreds of people left the cult because of it.

Catherine and I  – with a little help from our friends – Mark Vicente, Bonnie Piesse, Sarah Edmondson, Anthony Ames, and others went on record in the New York Times and news of the branding got worldwide publicity – which led to an investigation by the Eastern District of New York – then the arrest of Raniere, Allison Mack, Nancy Salzman, Lauren Salzman, [hapless fall gal] Kathy Russell and Sara’s sister, Clare.

It has culminated with Catherine’s best-selling book “Captive”, which details the saga and more importantly it led to her daughter India leaving the cult.

If ever there was a newspaper that served as an early warning for Sara Bronfman – that she should distance herself from Keith Raniere – it was the Albany Times Union.  The Albany Times Union broke the stories about Raniere pedophilia and many others over the years – as far back as 2002 – the year Sara joined.  The Times Union revealed how Raniere squandered Bronfman fortunes and how he used their money as a brutal litigation machine.

Sara had ample warning. The fact that she did not heed these warnings and continued to participate – made her an accomplice. She cannot pretend she did not know. And now her life is in jeopardy – just as she put others’ lives in jeopardy.